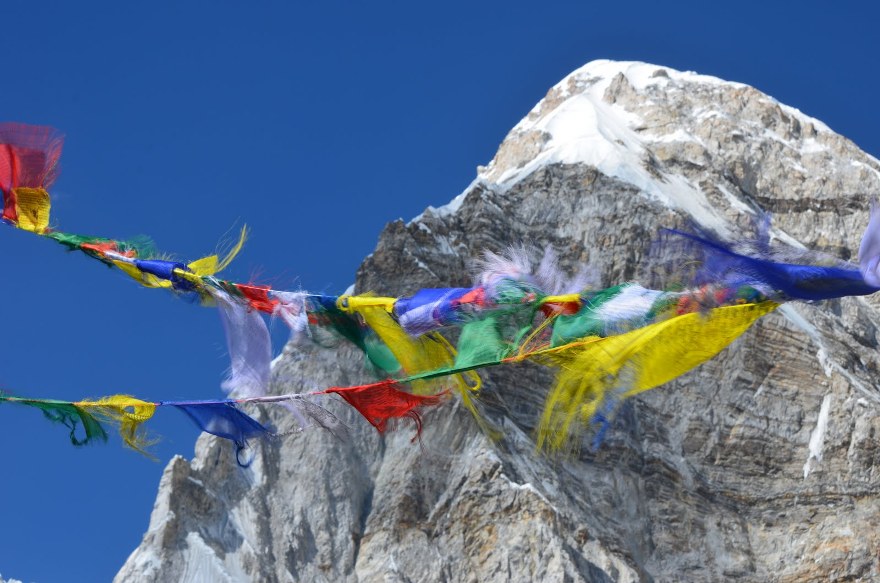 RMI Guide Dave Hahn reflects on the events surrounding Mt. Everest and the Nepal Earthquake tragedy. Mount Everest was simply too big for climbing in the Spring of 2015. The RMI Expeditions team was on the mountain and giving it our very best effort when the Nepal Earthquake struck and changed all priorities. Six climbers -guided by myself, Jeff Justman and our Sherpa Sirdar Chhering Dorje- made the trek in from Lukla over ten days. We were one of the very first Everest teams to reach the 17,500 ft Basecamp this season, pulling in healthy and strong on April 4th. RMI Veteran Guide Mark Tucker, our capable Basecamp Manager, was already on scene along with our Sherpa climbing team and camp support staff. Frequent snowstorms didn't keep our team from making a series of acclimatization hikes to local "summits" such as Kalapathar and Pumori Camp One. With great interest, we followed the progress of the Icefall Doctors as they forged a "new" route up the Khumbu Glacier to the Western Cwm. Our own training and reconnaissance runs through the Icefall were pushed back by repeated snowstorms but we persevered and moved into Camp One at 19,900 ft on April 23. On the morning of April 25th, the team had climbed to Camp Two (Advanced Basecamp at 21,300 ft) and returned to Camp One ahead of a threatening snowstorm when the magnitude 7.8 earthquake struck. Luckily, due to the poor weather, our Sherpa climbing team had cut short their own climbing mission that morning and had exited the Khumbu Icefall well before the quake hit. Giant ice avalanches thundered down from seemingly every steep mountainside. Fortunately, within just a few minutes via radio, we were able to establish the whereabouts and safety of our entire team. Nonetheless, the reports from basecamp were disturbing in the extreme. The airblast caused by an avalanche off Pumori had decimated a number of camps while largely flattening our own. Mark Tucker estimated they'd been hit by a cloud of ice debris moving at perhaps 150 miles per hour. Even so, Tucker and our Sherpa team engaged in a heroic, prolonged and strenuous effort to attend to the numerous casualties of the disaster. Those of us at Camp One could do nothing but sit out the snowstorm and hold on for the inevitable aftershocks. This pronounced and continued shaking made it abundantly clear that a hazardous and time-consuming effort to rebuild the Icefall route was out of the question. On April 27th, we came back down to basecamp by helicopter. We were considerably relieved to be safe and united once again, but the scope of the disaster was becoming increasingly clear. As reports of widespread destruction and disruption across Nepal now came flooding in, climbing mountains quickly receded in importance. Our Sherpa team was justifiably anxious to be getting back to check on homes and loved ones. We formally ended our climbing expedition and made plans for heading home. The three-day walk down toward Lukla allowed ample opportunity for contemplation. Our emotions were conflicted by the bizarre circumstances we found ourselves in. In the days immediately following the quake, foreign climbers and trekkers had quickly fled the Khumbu Valley, leaving it blissfully quiet. As much as we enjoyed the solitude, we each were aware that we were seeing the beginning of the financial disaster that would inevitably follow the natural disaster. Tourism is virtually the only source of revenue in rural Nepal. We tried to reconcile the absolute beauty of the setting, still majestic with snow-topped peaks and magical with blooming rhododendrons, with the tragedy on display in the villages. We walked through funeral ceremonies and past ruined stone homes and lodges. Locals still greeted us with a warm "Namaste" even as we learned from our Sherpa staff that homes and businesses in these still-picturesque villages were destroyed and that insurance for such losses did not exist. Then we were down to Namche and Lukla and naturally our focus shifted to getting ourselves out to Kathmandu. We were simply thankful that facilities like the airports seemed to be getting back to business as usual. Convinced that getting ourselves out of Nepal as quickly as possible would be our best service to the Nepalese, we each left the country within one or two days of reaching Kathmandu. I'm certain we were all relieved to get back to the safety and comfort of our homes... but none of us could truly leave behind what we'd seen and experienced. The aftershocks continued and we were all acutely aware that the 7.2 quake on May 12th had scored a direct hit on the villages of our own Sherpa/Nepali expedition staff. Previously weakened structures had come down completely and entire villages were ruined. We are each now struggling from afar to find ways to help those who've helped us so much. It is quite a different mountain than the one we set out to climb back in March... but it is a worthy struggle nonetheless. RMI Guide Dave Hahn

Want to know more about rock climbing and other mountaineering sports refer to our website for details www.mountaineering.asia

Namaste from Truchas. Having twice trekked in the Khumbu, climbed Pokalde & Imja Tse, and was involved with the Friends of Shanta Bhawan clinic, I have strong affection for the people of Nepal, particularly the Sherpas. For anyone who is considering making a donation I most highly recommend the American Himalayan Foundation (http://www.himalayan-foundation.org)as an organization that will properly direct all contributions.

So glad that you and your team are safe.  Thanks for sharing your story.

Thanks for sharing Dave.

Dave,
Sincerest sympathy and condolences for the nepalese people. Your account of the circumstances is sobering to say the least. I can only imagine what is was like to be there in the middle of the quake.

We cannot forget the Nepalese.  Please keep us updated on your Sherpa team and their families.  I am happy your USA team is safe now let us all do what we can to help the people of Nepal.  We should never get so comfortable in our lives in the good ol’ USA that we forget those who are cold, hungry living outdoors while we are comfortable in our beds and with full refrigerators of food.  The children will suffer the most and their parents will suffer in their hearts for not being able to give their children a roof, food, warmth and security.

Hi Dave, Like everyone else has said we are happy you are safe. I was on your rope team on Rainier last August. I felt very safe having you lead the team and you are an inspiration to all of us. Thank you for everything you do.

Hi Dave:
I’m so sorry of what happen in Nepal and you team. But I’m glad you and your team is Ok. The good thing is the mountain will always be there, for those that in the future that will like to go back. I only hope that all the people that was affected, will be soon be able to overcome the tragedy.

Dave, practically all the comments begin with thank you and though it seems insufficient, so will I. Thank you! The tragedy and loss of life is so incomprehensible. Hopefully you will let all know how we can help you help those so desperately in need. Again, thank you!

Thanks for your concern for the people of Nepal.  Your commitment to safety and others first is to be commended.  You are truly a good person.  Thanks again for the information on this trip.  I look forward to these emails everyday as they have become an inspiration to me to learn more about climbing and training for my Rainier climb in two years.
Thanks

Dave,
Glad you and your team are OK. Does RMI have a recommended charity for the Sherpa & Nepalise climbing community? Thanks

Thank you for sharing this and supporting the people of Nepal both before and after this tragedy. I am glad you and the team are home safe. Hopefully everyone affected by these events will receive support from the global climbing community.

Thank you for your dedication to the people of Nepal before and after this tragedy. I am glad you and the team are safe. My thoughts and prayers go out to everyone affected by these events.

Dave, have talked to you several times on the hills of Taos Ski Valley. We consider you the adopted son of New Mexico. Glad you are safe and sound, we follow your summit bids yearly (on the web of course).

Yes, thank you Dave for taking the time to update all of us- we can’t begin to imagine what you, the team and everyone there went through and will continue to go through. Our hearts and prayers are with everyone!

Thank you so much for the intriguing insight. We are so glad to hear your reports as the tragedy was unfolding. Big Jim couldn’t said it better, it is a worthy struggle indeed.

Thank you for writing and sharing this. It’s so hard to imagine such a tragedy in this place of magnificent beauty and with such extraordinary people.

You are eloquent as ever Dave. Thank you for sharing your unique insight.
~Belladonna