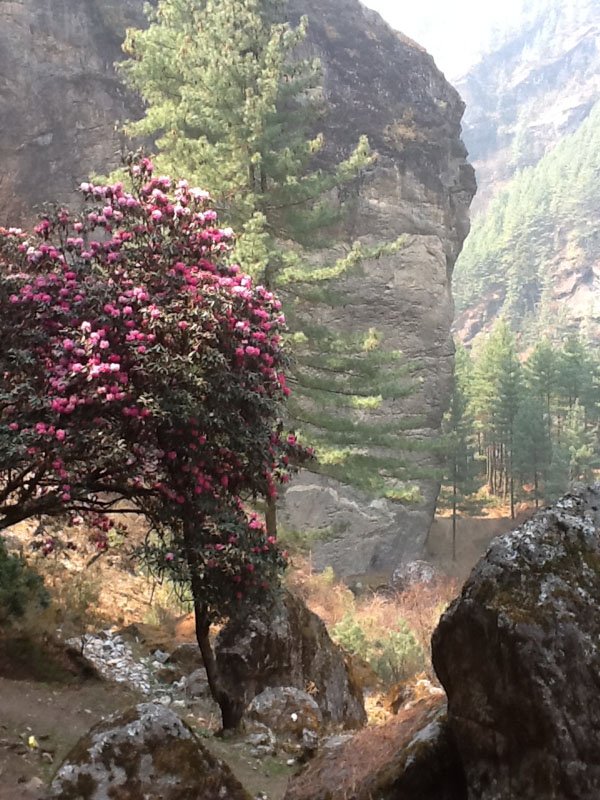 The morning started with a 4:30 am departure to a chaotic airport where the security guards found a pocket knife in a pocket and just shrugged. When we got on the plattus porter plane the pilot used his sleeve to wipe the condensation from the windshield so he could see right before takeoff. We also learned halfway through the flight that there was one seat belt not connected to anything. But despite our laughter around the security, pilot, and plane, we had the smoothest flight and landing ever. The team cannot stop smiling as we walk through gardens of bok choy, carrots,and onions. We pass large carve rocks called mani walls that read "o mani padme om" meaning the jewel in the lotus flower. We make way for donkeys and zopkeos (a yak and cow breed). We cross the Dhud Kosi river meaning "milk river" because it flows from the glaciers on Everest making it white. The sunshine and a glimpse of high snow capped peaks around us, kind of the perfect day on the trail. RMI Guide Christina Dale

Sign Up For Everest BC Trek and Lobuche 2019 Emails

Sign Up For Everest BC Trek and Lobuche 2019 Emails

Hi Team - Phew! Glad to hear the flight went smoothly! I was a little nervous when Bruce and Michael told me about the airport, and my curious self started down the deep and dark hole of the internet. Looking forward to tomorrow’s update!