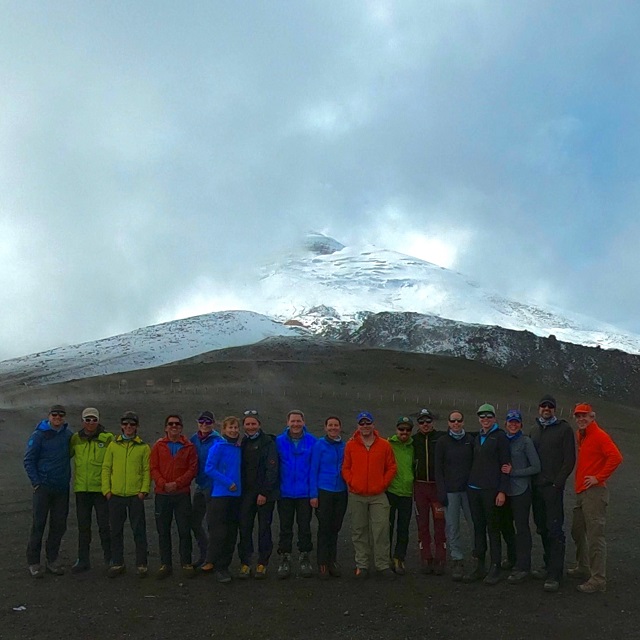 In the midst of a great trip with a wonderful group, one of the hardest parts of a guides job is to make the decision to turn a group around and head back to the hut, knowing some  climbers will continue up and likely summit.

Last night we woke to a thin cloud and light snow at 15,874’. The group got ready and was optimistic due to the warm air and fresh snow that would make walking the first 1.5 hours on rocky trail easier. However, we had a similar experience on Cayambe that resulted in an electrical storm.

With over 70 people setting out from the hut to climb we got out mid pack and made our way to the toe of the glacier to put crampons on. During this first stretch the moon was bright, reflecting moonlight off the white snow so headlamps didn’t have to be turned on.

As we ascended the glacier, the new snow accumulation had increased from 3” at the hut to 1 foot + at 17,800’. As we pulled into our second break the guides had begun chatting about snow stability and while at the break dug 2 snow pits to better assess what we were traveling on top of. The results were a foot of new snow overnight on top of a 2 inch consolidated snow layer that moved with enough energy early on in the test to reconsider climbing higher. There had been a meter of new snow in the last week without much sun or heat to help consolidate the snowpack.

The terrain above us consisted of larger crevasses and steeper slopes, when combined with new snow avalanche conditions this made for hazards that we could not safely manage. We showed the group a second test and explained our concerns. The guides and climbers are naturally disappointed to have missed another summit and safety has to take precedent. In talking with the Ecuadorean guides, this month has been wetter with more unstable weather patterns then historically seen in December.

We are currently heading back to Quito for showers, packing and flights later tonight. We’ll wrap up a fun trip in that new friends were made, we saw lots of beautiful scenery and spent time in the mountains. We’ll also look forward to the unfinished summits of Cayambe and Cotopaxi on another trip. Thanks for following along.