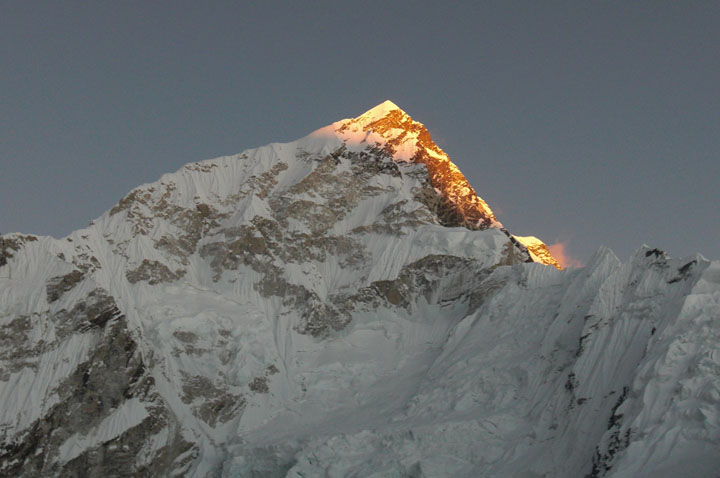 Bravo Dave, Max and I enjoyed following your climb. Very exciting and very beautiful. See you back in Taos. Safe travels. M&M

Wow Bravo you guys ! If anyone would climb a Big Mt. Yes it it would be with the best Dave, and Melissa! Your conscientiousness was amazing! So glad you all are safe…Judy 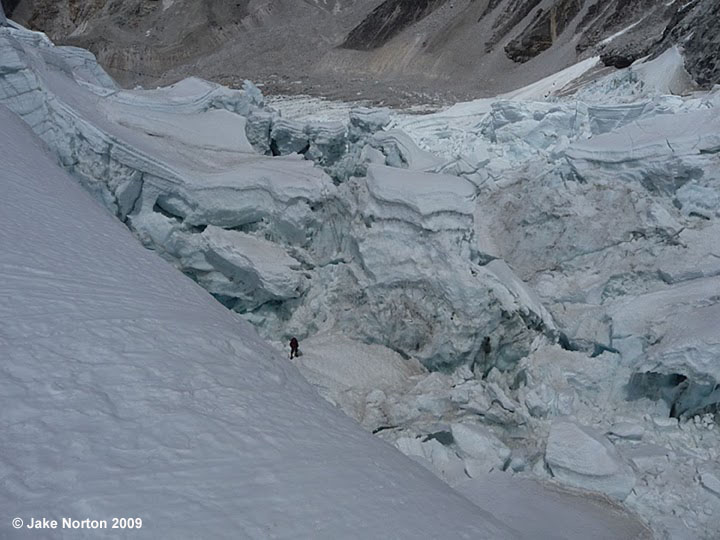 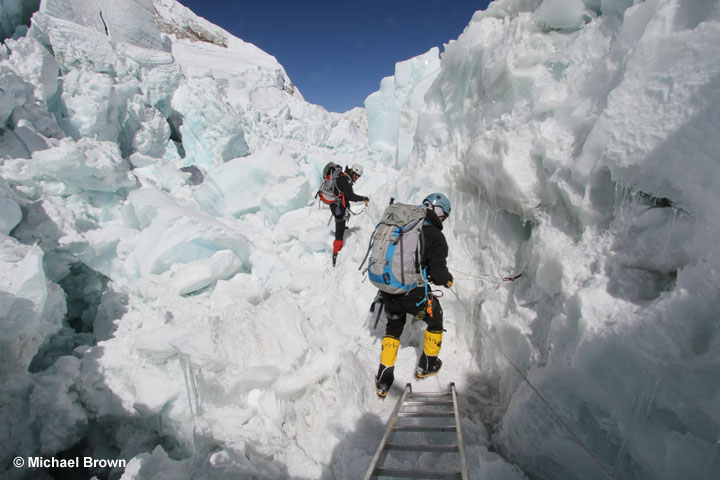 Update 2:45 pm Nepali time: Dave Hahn, Melissa Arnot and team are 20 minutes from camp, so they are safely through the Khumbu Icefall! I will still keep track of the Sherpa team that is still higher up on the mountain. They need to go back up to Camp 1 either tomorrow or the next day for final loads off the mountain. Until everyone is clear of the upper mountain, I will be here in communication with the Sherpa team. What a Climb! RMI Guide and Everest Basecamp Manager Mark Tucker
Leave a Comment For the Team (2)

Thanks so much for all the updates and a hearty congrats to you, Dave, Melissa, and your team! You may not remember, Mark, but my wife and I met you on Everest 2010 and most recently coming down the Mweka Route on all of our last day on Kili last August. We enjoyed chatting with you.

Great news! Thanks for the update.

Mt. Everest Expedition: The Team is Resting at Camp 2 on Their Descent 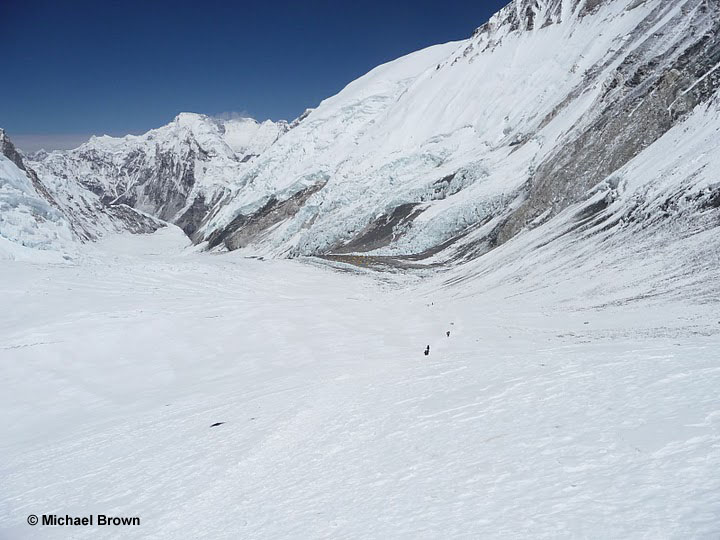 After making great progress on their descent, RMI Guides Dave Hahn & Melissa Arnot and team are safely at Camp 2! It was a long day but sleep will be so nice with the thick air of 21,000'. I will continue to send updates as the team makes their way back to Everest Basecamp. RMI Guide and Everest Basecamp Manager Mark Tucker

Hooray!! # 14!!!  We’re so glad for you Dave and look forward to that celebratory MARGUERITA upon return.  Its hot , dry, and beautiful in Taos; but we’ve followed you once again on the RMI Blogs and cannot quite believe the number of climbers you have to contend with!!  But then you usually wait it out until almost the end of your permit, and are thus successful—we’re so proud of you!!!

Congratulations Dave, Melissa and Team.  Dave, please do not ever act your age.  You are an inspiration to all of us. 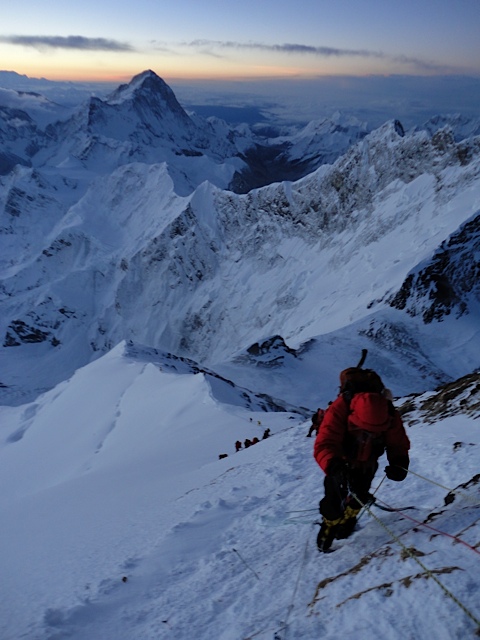 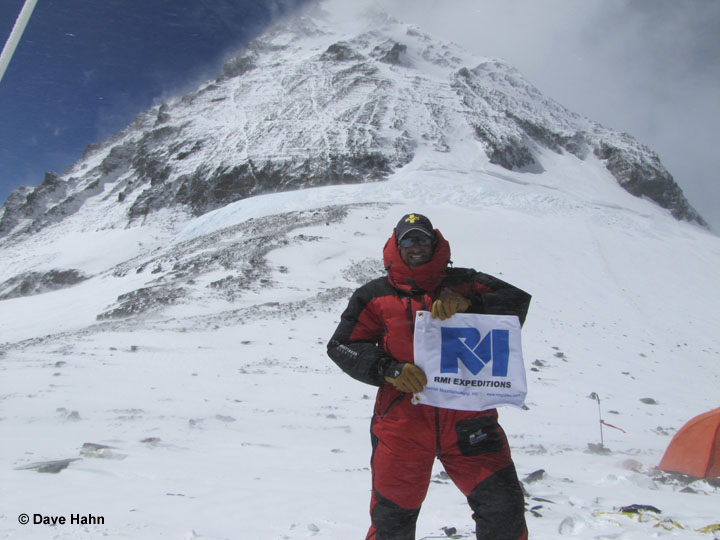 Mt. Everest: Team is at the South Summit! 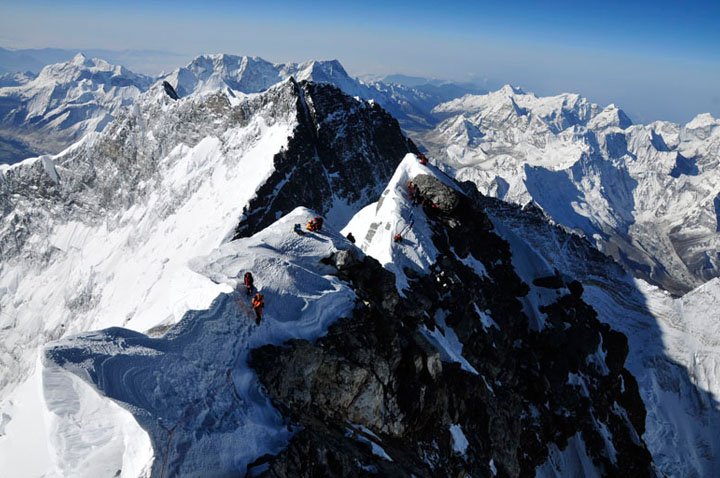 RMI Guide Dave Hahn contacted Everest Base Camp from the South Summit. The team is doing well and the weather is great. They are enjoying watching the sunrise and have gotten some great photos. The team is taking a break at the South Summit which will allow climbers descending from the summit to get past. The weather is great, the team is strong, they have plenty of oxygen and a good pace so far. RMI Guide and Everest Base Camp Manager Mark Tucker
Leave a Comment For the Team (1)

Be safe, climb strong and get r dun!!  Drinks are on me next time you’re in Seatle!!

Mt. Everest Expedition: The Team is at the Balcony! 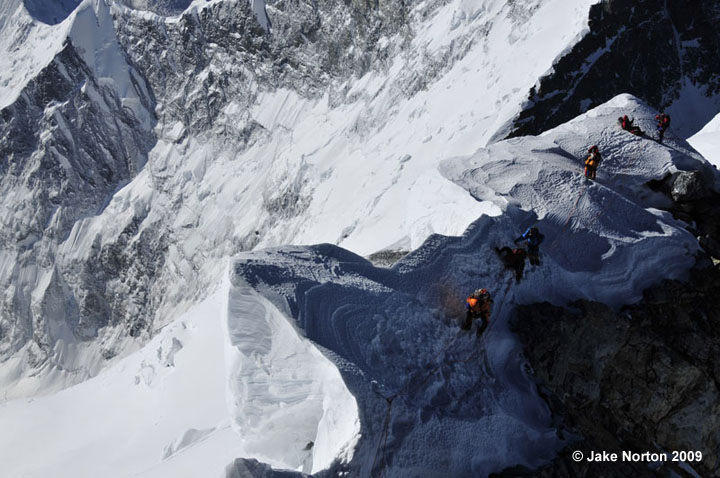 May 26th, 4:30 a.m. Nepali time: Our Sirdar Sherpa, Lam Babu, is at the South Col and relaying messages during the climb. Dave Hahn, Melissa Arnot and the team are at the Balcony! The climbing team is changing oxygen bottles, having a snack and a drink. Next stop the South Summit! Here at Everest Basecamp, the top of Pumori is just starting to catch some light. No wind. It's a beautiful morning! RMI Guide and Everest Basecamp Manager Mark Tucker
Leave a Comment For the Team (1)

Dave you are an inspiration to us all…. Go Big..  Hope to see you on Rainier on August 27th when I go for my 5th summit

It is 4:30 in the afternoon on the 25th of May, at South Col, Everest High Camp. We didn’t go for it last night, there a few too many people, I don’t know how many exactly, but on the order of 90 – 100 and there was a wind last night, so we didn’t pull the trigger last night. We are going to go for it tonight. We’ve got the forecast in our favor, the winds are supposed to drop down. There are other people going for it tonight but manageable numbers and we feel pretty good about it. It’s a sunny day up here at 26,000’ and we are hanging out, making plans taking care of our selves, getting ready because tonight we want to start up for the roof of the world. I’ll try to give you a call when we get up and are brewing up in the dark tonight and the cold. But all is well, we are going ahead with things. RMI Guide Dave Hahn

Godspeed to you and your team Dave! See you soon back in Taos.

Hit the top and then get back down safely! Have a great climb.

RMI Guide Dave Hahn and the Mt. Everest team have decided to remain at Camp 4 and postpone their summit attempt until tomorrow night Nepali time. The winds remained strong and they are hoping for better weather tomorrow. We’ll keep you posted. Best of luck to the Everest Climbers!
Leave a Comment For the Team 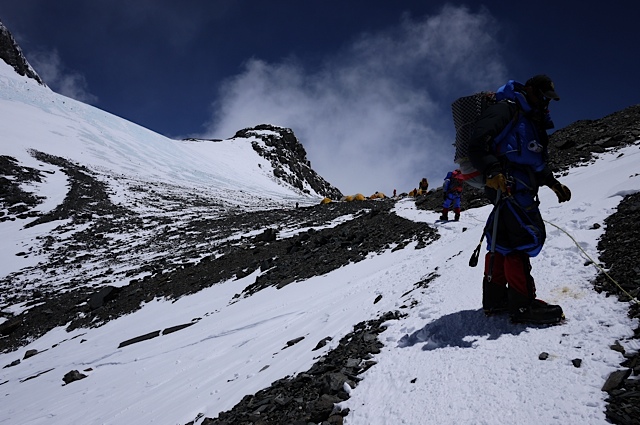 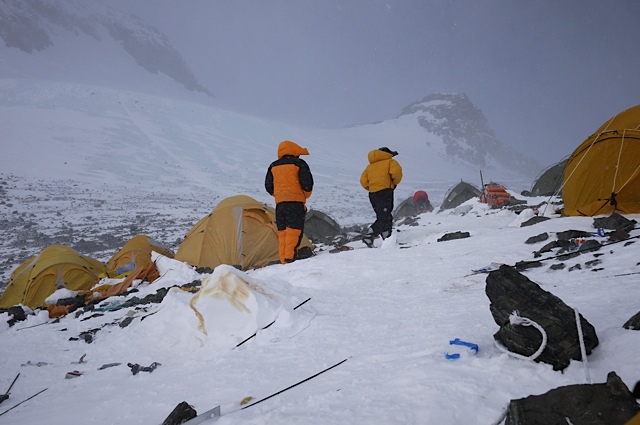 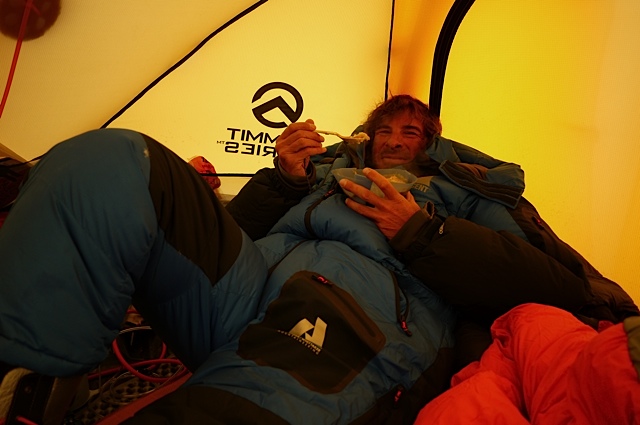 Hey, this is Dave Hahn calling down from High Camp (Camp 4) on Mt. Everest. We are just about at 8,000 meters. I hope you can hear me the winds are beating the stuffing out of our tent fabric right now. We got up here late morning today, we moved up pretty well from Camp 3, in about 4 ½ hours. Very crowded conditions on the Lhotse Face but the team was doing well and we cruised on up here. It was a beautiful day but as soon as we got into the South Col the wind was blowing. Our forecast has changed a little bit, it’s not looking like quite the great window of opportunity that we thought it would be. There are a number of teams going for the summit tonight. In fact, many of them are starting and it’s not even 8 pm yet. We may not be starting if the wind is still blowing. We are thinking we can wait it out and maybe get some better weather tomorrow. But we are ready to go if this wind drops and the crowded conditions aren’t too bad. Four team members, four Sherpa up here on the South Col and it’s exciting as always. We don’t know what’s going to happen but we are going to play our cards right. RMI Guide Dave Hahn

Be Safe, as if you need to be told.  Best of Luck for a bright sunny Summit.

Best of luck to you a Dave! 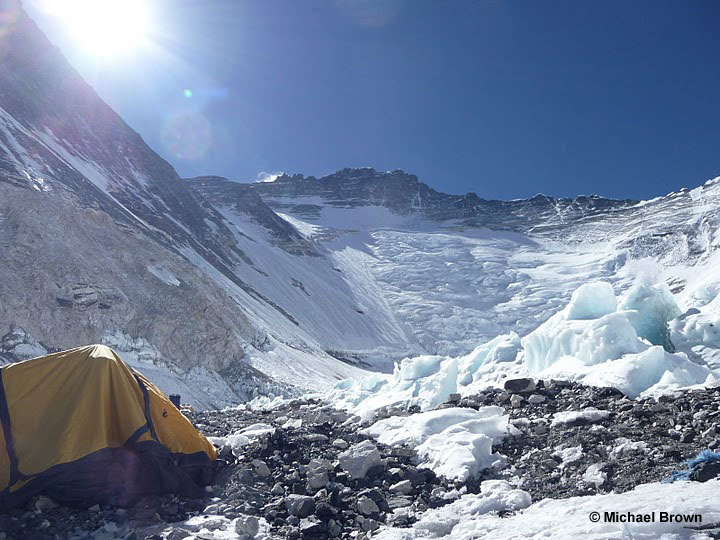 Hello from Everest Base Camp, I spoke with Dave and Melissa at Camp 3 and WOW did they sound great! The climbing team left Camp 2 early this morning under perfect conditions. As they periodically checked in it sounded like they were truly enjoying the climb and taking pictures when possible. As you can imagine, under harsh weather there isn't time to enjoy the mountain and the views. Our super Sherpa team started a bit earlier and set up tents at Camp 3 then returned back to Camp 2 to spend the night. The equipment that had been brought up there weeks ago was all intact and the team was able to pull into a well provisioned home for the night. Last I heard Melissa was kicking Dave's you know what in the stove boil off competition for dinner, Go Melissa Go! As this climb is quickly coming to it's conclusion, and a day like today that can be so pivotal in the future success I get so excited with this good luck. Not that these tough individuals wouldn't meet the challenge of wind, cold and snow. I just like the way it is shaping up. The weather forecast is still looking good with winds decreasing over the next few days. You have to love that! The Sherpa team will get out of Camp 2 early tomorrow morning and the climbing team will try and have a seamless hand off of some gear to them from Camp 3, check out time should be around 6:00 am. Then the whole team should climb together up to high camp the South Col, getting there midday, that should allow enough time for rest and preparation for early departure toward the summit that night. RMI Guide & Everest Base Camp Manager Mark Tucker

Wishing everyone a safe a successful summit! Go RMI!

PLEASE keep posting, we are eagerly waiting for news from the summit.

More Entries
Filter By:
check the Summit Registry try our Adventure Finder
Back to Top