As young boys growing up in Seattle, twins Jim and Lou Whittaker spent their childhood scrambling amongst the peaks of the Cascades in the shadow of Mt. Rainier. At sixteen years old, they first climbed Rainier, returning from the mountain to find Seattle in the midst of celebration: World War II was over. By 1948 both Lou and Jim were guiding on Rainier while also venturing to mountains throughout the Northwest and Alaska. The brothers built a record of impressive climbs throughout the region and a reputation as skilled climbers and experienced guides. In 1963 Jim and Lou were invited to take part in the American Expedition to Everest. Lou declined to go, but Jim Whittaker became the first American to reach the summit of Mt. Everest on that expedition.

Read more about Lou's climbing and other ventures at LouWhittaker.com

With over two decades spent pursuing personal climbing and business endeavors, while also working as a guide on Mt. Rainier, Lou gained a deep appreciation for the beauty and challenge of Mt. Rainier. In 1969 Lou partnered with Jerry Lynch to form Rainier Mountaineering, Inc. (RMI). Lou's vision from the beginning was to establish a guide service that was dedicated to teaching as well as leading climbers. This far exceeded the standard guiding model of the day in which clients followed guides but rarely participated as a valued member of a team. In crafting structured courses within its trips, RMI ushered in a new era of mountain guiding where guides helped build skills and encouraged the involvement of their clients.

As Lou discovered through his own climbing, Mt. Rainier is a gateway into the world of mountaineering; its sheer size and challenge gives climbers the experience akin to many of the world's highest ranges. RMI has since introduced generations of climbers to mountaineering and opened up many new guided routes on Mt. Rainier and around the globe. Many of our climbers go on to have long and successful climbing careers all over the world. Dick Bass, the first person to complete the Seven Summits, started his quest climbing with RMI Guide Marty Hoey on Rainier before going on to climb with many of RMI's guides on his subsequent expeditions.

The 1970s and 1980s ushered in the era of international expeditions at RMI, one that continues today. Climbing along with the likes of Jim Wickwire (the first American to summit K2) and John Roskelley (who established numerous and impressive first ascents throughout the Himalayas), RMI guides could be found on expeditions to Pakistan's K2, on Nanda Devi in India, and Everest. In 1982 Lou led an expedition to attempt Mt. Everest's unclimbed North Wall, climbing with a team of RMI guides including Eric Simonson, Marty Hoey, Phil Ershler, George Dunn, Joe Horiskey, and Larry Nielson (who became the first American to summit Everest without oxygen the following year). Returning in 1984 with his son Peter on the expedition, Lou led the First American Ascent of the North Col of Everest when Phil Ershler successfully summited in a heroic solo summit push. A few years later, Lou and a team of RMI guides climbed Kangchenjunga, making the First American Ascent of Kangchenjunga as well. It was on this expedition that Ed Viesturs, the first American to summit all 14 8,000-meter peaks without supplemental oxygen, was introduced to the Himalayas and reached the first summit of his 8,000-meter quest. RMI Guides Ed Viesturs and Larry Nielson were the only Americans to summit Mt. Everest without oxygen for many years.

In 1975 RMI led its first guided expedition to Denali, led by now Owner Joe Horiskey. Since that trip, we have led more than 300 expeditions to Denali and are the most experienced guide service on the mountain. It was also in 1975 that Peter Whittaker, Lou's son, started guiding on Mt. Rainier. Since then, Peter has become a major partner in RMI, taking over the leadership of RMI in the late 1990s.

RMI's independent culture and guiding philosophy, along with our history of notable international expeditions, established us as the workplace for many of America's greatest mountaineers; many of them have passed through our ranks over the years. As RMI's roster grew with talented guides, Lou encouraged many of them to start their own guide services. As a result, dozens of guide services across the country have since been established by guides who learned the ropes at RMI. 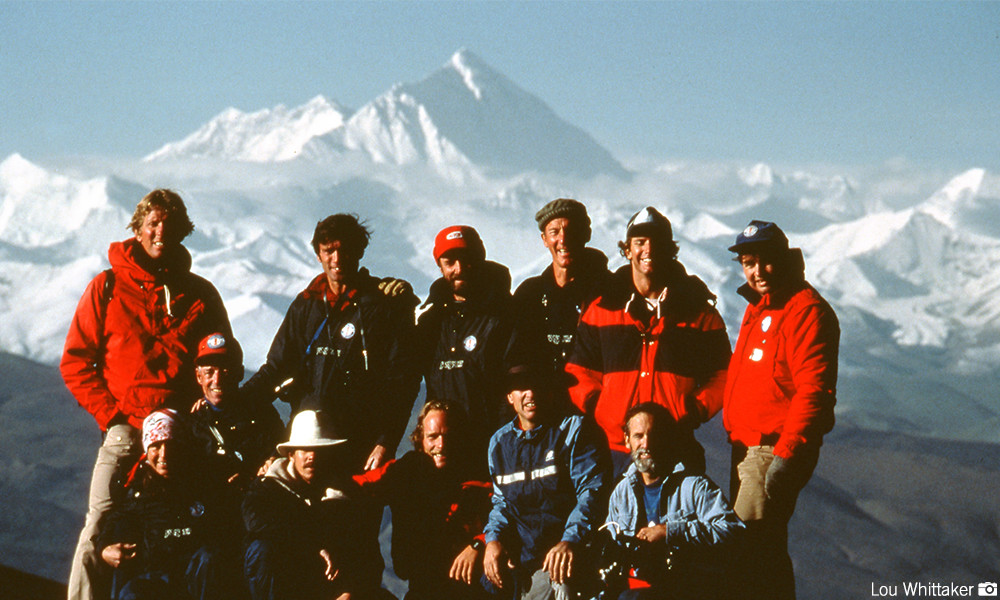 The most famous RMI guide that ever lived was also a profoundly humble man in an arena not known for fostering humility. Nawang Gombu Sherpa was a man of many such contrasts.

My memories of working with Gombu aren't unique or privileged. I wasn't seeing some side of him that others weren't privy to. But because of his unassuming nature, casual acquaintances might have mistaken his stature in the world. Certainly not, if they'd studied mountaineering and 20th-century world history. Gombu was the first man to summit Mt. Everest twice. He was the longtime director of the Himalayan Mountaineering Institute, and he was nephew to Tenzing Norgay. He was the youngest Sherpa on the successful 1953 British Mt. Everest Expedition and was one of the last surviving climbing Sherpas of that heroic era.

Nawang Gombu had met the Queen of England on several occasions. You can find a picture of him in a 1963 National Geographic magazine placing a silk scarf of friendship around John F. Kennedy's neck in the Rose Garden. But if you worked and lived with Gombu around Mt. Rainier in the 1970s, 1980s, or 1990s… you probably don't remember him doing a whole lot of explaining as to why he was so special. More likely, you remember him working very hard. And as he got a bit older and less capable on the mountain, some may remember that he also worked hard down around the guide shop, pushing a broom or helping with rental gear. 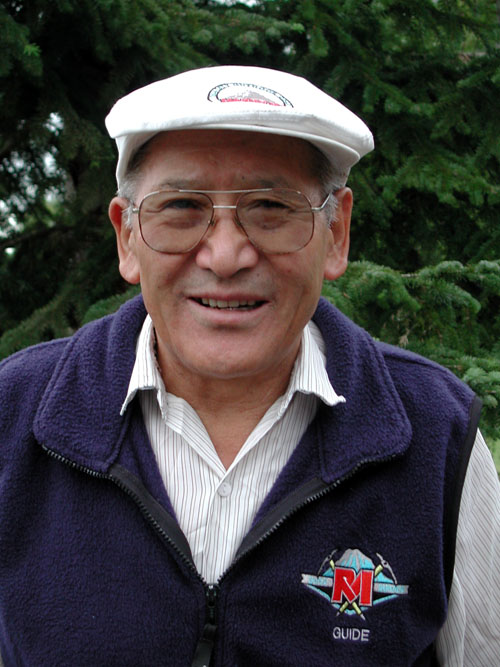 Despite his unfailingly open and friendly personality, it wasn't the easiest thing for a young guide to get to know Gombu. He was from a different generation and a vastly different culture and so he talked and acted a little differently… and often times he was a bit needy since he was somewhat isolated in Ashford without a car. So, while everybody called him a friend… that was pretty easy with Gombu, it took a little extra effort for someone to actually be his friend and include him in activities and routines. But for that Gombu was always profoundly grateful. I'm embarrassed now to remember how many times he cooked me dinner and then didn't allow me to wash dishes afterward. There wasn't even any question on that… he'd just push you out of the way (and he never lost that particular strength). We did have some fun together… but not enough to justify all of that dishwashing on his part. I'd take him into the suburbs for haircuts and shopping trips to the malls. We'd go into downtown Seattle so I could obsess over shiny climbing gear in the stores. We went rock climbing out at Leavenworth (Gombu was better than I was, not surprisingly) and we even went to the soldout Kingdome to watch Ken Griffey Jr. hit a home run (his ninth in nine games… it was a big deal). I recall how amused the people in the stands around us were to hear me trying to explain baseball to a Cricket fan… if only they'd known who he was. But I thought that a lot back then, since, as I say, Gombu didn't go out of his way to let people know he was famous.

Which brings me back to the guide shop and a typical start to a day on Mt. Rainier in which I'd meet a bunch of new climbing enthusiasts. They'd introduce themselves and detail their previous successes and immediately I'd find out about the banks and corporations they headed, and I'd hear about their ambitions for high places and their admiration for those that had already been to those places. And amidst all the introductory chest-thumping (not just theirs… my chest got worked as well) I'd look over to see Gombu sweeping dust off the rental counter and I'd pause to consider that those captains of industry –and I- might not ever meet a greater mountain climber than the small, friendly, quiet legend who'd just fitted them for boots.

Our history and involvement in mountaineering has given RMI the opportunity to take part in other aspects of the outdoor mountain community. RMI was a founding member of what is now the Outdoor Industry Association; we have hosted conferences on establishing environmental protocols for alpine mountain environments, and we support numerous climbs and causes here in our community in the Northwest as well as around the world. RMI has worked with the American Lung Association since 1988, leading over 1,100 climbers and raising over $4.4 million on the annual Climb for Clean Air. In 1995 Peter Whittaker organized and led Expedition Inspiration, climbing Cerro Aconcagua in Argentina with a team of breast cancer survivors, raising over $2 million for breast cancer research and awareness, and setting an example of the triumphs cancer survivors can achieve. A climb of Rainier with Peter Whittaker and Eddie Bauer CEO Neil Fiske led to the launch of the Eddie Bauer/First Ascent line of gear and outdoor apparel. Developed by Peter and a team of RMI guides, they set out to design mountaineering clothing and gear to meet the standards of guides who spend their lives working and playing in the high mountains. The clothing line officially launched with the 2009 RMI / First Ascent Everest Expedition.

Read more about RMI's commitment to environmental and social stewardship of mountainous regions. 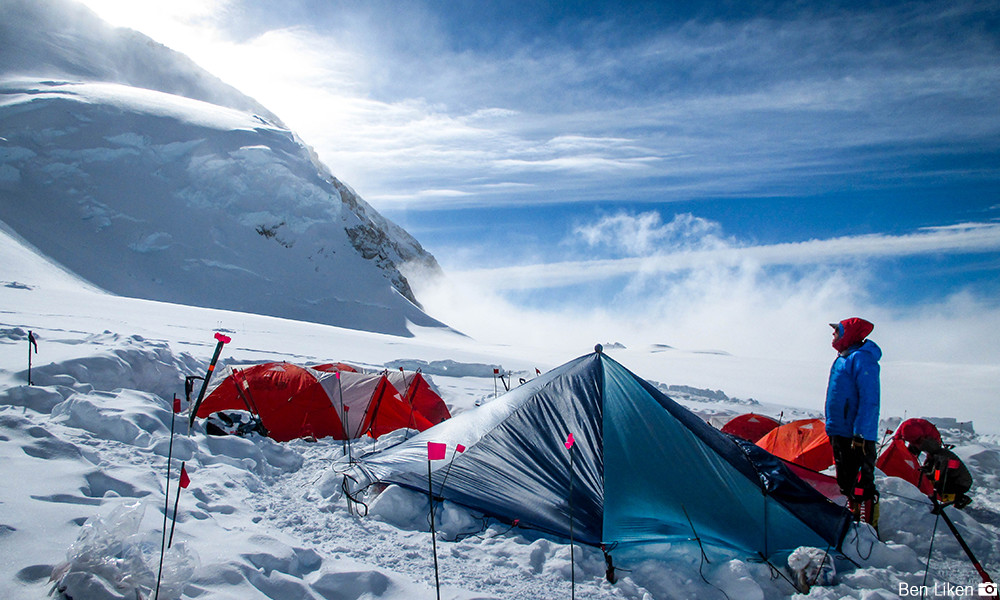 With over 50 years of history in guiding mountaineering expeditions, RMI is one of the premier guide services in the world. Lou's vision that attracted the best guides persists today. With progressive training and mentoring programs, accreditation and support of the AMGA, and numerous certified guides as part of our staff, RMI continues to push the standards of the profession forward. Our guides climb in all corners of the world, from the Himalayas to the Andes, from the Alaska Range to the Antarctic. Recent expeditions include Antarctica's Ellsworth Mountains, where several first ascents and ski descents were established, first ski descents in the Georgian Caucasus, and numerous Himalayan climbs. RMI guides can be found in World Cup Ice Climbing competitions, in the pages of outdoor magazines, and in the mountains every day. RMI's guides are the best in the industry, bringing years of experience climbing around the world to our climbs.

Come climb with us and take part in America's mountaineering legacy.