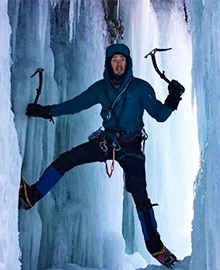 Jack grew up enjoying the rugged wilderness of eastern Iowa with the Boy Scouts, learning to climb and backpack. It was in college where he became a trip leader for the University’s Outdoor Recreation program that he really began to expand his outdoor pursuits and guiding skills. It was a fellow trip leader at the program that convinced Jack to start spending his summers between semesters professionally guiding in Alaska. Soon after graduating with a degree in Physics, he transitioned to Alaska year round to pursue his passion for the outdoors and enjoy Alaska's long glorious winters.

Jack currently resides in Anchorage, Alaska during the off season where he climbs crumbly rock, cold ice, snowy mountains and backcountry skis as many days as possible while also managing a consignment outdoor gear store and performing improv comedy.

Read Posts from Jack on the RMI Blog