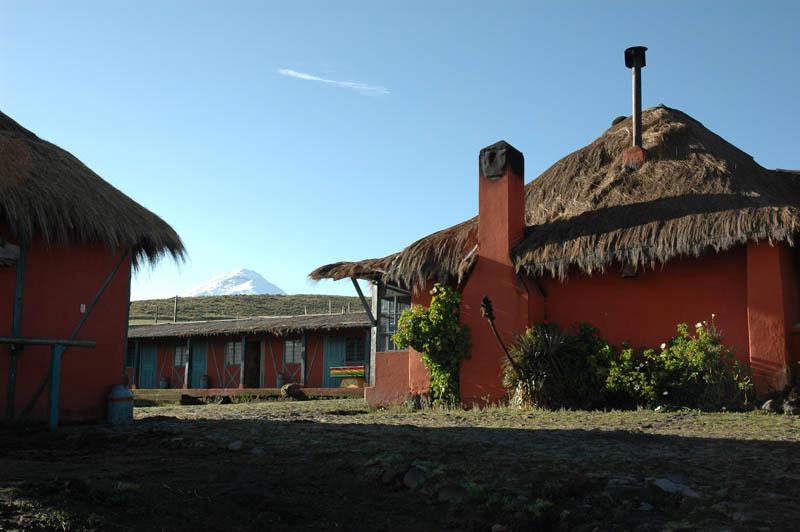 Hello to those following our Ecuador climbing adventure. I will begin by saying we did not summit Cayambe yesterday because of difficult route conditions. The morning started as most climb mornings do. An eleven pm wake up call, a bathroom visit the body doesn't ask for, hot liquid, cold bread and and the ever present feeling of "why the heck am I doing this?" The weather outside was clear and the temps warm. As we ascended the clouds rolled in giving us light snow and a wet mist. As we got higher the temps dropped and the snow became more difficult to walk in. The wind was blowing 10 mph and a light snow was falling. With only 400 feet to climb before gaining the summit ridge we turned around because of deep post holing and deteriorating weather. The team was disappointed but understood the reason. After the climb we regrouped, packed up and loaded the trucks ready to bounce our way back to civilization. The road to and from the Cayambe Refugio is the roughest I've ever been on. Usually a great way to start and end the adventure of climbing the highest point on the Equator. Once the adventure ended we met our bus at a gas station where we loaded up on post climb necessities such as Pringles, coke and ice cream. This held us over until dinner. Five hours after leaving the mountain we arrived at our hacienda called, Chilcabamba, tucked quietly away in the beautiful countryside under the shadow of Cotopaxi. After a well deserved shower, beer and honest night's sleep, we awoke to appreciate this lodge's full beauty. Although we couldn't see the mountain, the surroundings offered enough to observe. Hummingbirds floated outside the windows and flowered trees waived in the wind. The rest of today will be spent resting, drying gear and preparing for the climb to come. There is nothing better than a full day's rest after an exhausting day in the mountains. Stay tuned for more mountain climbing. RMI Guide Adam Knoff saying Buenas noches from Chilcabamba.

This post is misleading — factually accurate but not the full story. It was not just “difficult route conditions” that prevented the team from summitting. A three-person rope team (one guide, two clients) fell into a crevasse near the summit of Cayambe as the result of an avalanche after the team was trail breaking on a steep slope. Thanks to the skill and professionalism of RMI and local guides, the injured climber safely made it to the hut for further evaluation.

Either post the full story or suspend posting after accidents. RMI otherwise runs outstanding expeditions and the guides are fantastic, but fluffy posts hurt the blog’s credibility and disrespect those involved.

Praying the weather gods give you a second summit as beautiful as you had before!