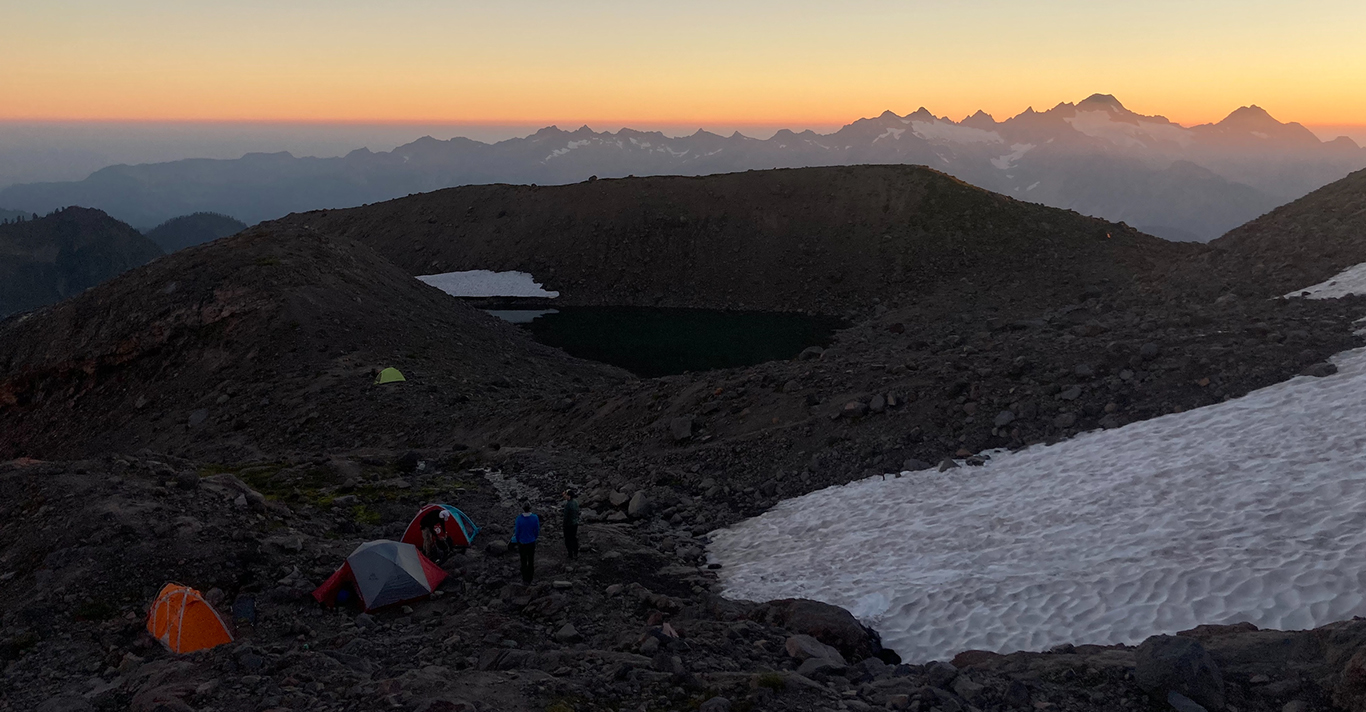 RMI Guides Josh Geiser and Evan Sather joined many guide services last weekend in the first annual Sandy Camp clean-up project. Josh had the following to say about their weekend on Mt. Baker:

"We had a great time representing RMI for the first annual Sandy Camp cleanup on Mount Baker. After a summer of heavy use, it was great to put our Leave No Trace (LNT) principles into practice helping to clean up an area that we all share. It was also nice to see guides from so many other companies coming out to help and make new connections across guide services. In total, we cleaned up 74 used blue bags as well as a bunch of other trash scattered throughout the camp.”

Sandy Camp is an alpine camp used along the Easton glacier route of Mt. Baker, one of the most popular standard routes on Mt. Baker. All recreational activities including climbers are expected to pack out what they pack in and dispose of their waste properly (LNT Principle #3). Leave No Trace (LNT) principles are an important part of recreating, especially in the Mt. Baker National Recreation Area, operated by the USDA Forest Service. This includes all kinds of waste, especially human waste. The Sandy Camp clean-up event spent a lot of the focus on improperly disposed of human waste and toilet paper.

Proper disposal of human waste helps to avoid negative impacts on water sources, minimize the possibility of spreading disease, and maximize the rate of decomposition. As the fragile alpine settings of Mt. Baker and the surrounding trails are becoming more popular, it becomes increasingly important to practice Leave No Trace principles to ensure the long-term sustainability of these beautiful places.

RMI Guides Mike Walter & Abby Westling led the Four Day Climb August 26 - 29 to the summit of Mt. Rainier this morning with all climbers in both groups.  Mike reported a beautiful day on the mountain as the teams were approaching the crater rim around 7:10 am.  Climbers will spend time in the summit crater before starting their descent, dropping 4,500' back to Camp Muir.  After a quick stop they will continue the remaining 4,500' to Paradise.  Once back at Rainier BaseCamp later this afternoon the program will conclude with a small celebration for the teams.

RMI Guide Tatum Whatford radioed at 7 am that the first rope teams of the Four Day Climb August 22 - 25 were reaching the crater rim.  The remaining teams were 10 minutes out. Tatum reported a beautiful morning on the mountain with no wind and a very good route. Once they spend a bit of time on the summit, Tatum along with RMI Guide Alex Halliday will lead their climbers back to Camp Muir where they will have a quick break to re-organize and pack for their remaining descent to Paradise.  The teams will conclude their program this afternoon with a celebration at Rainier BaseCamp. 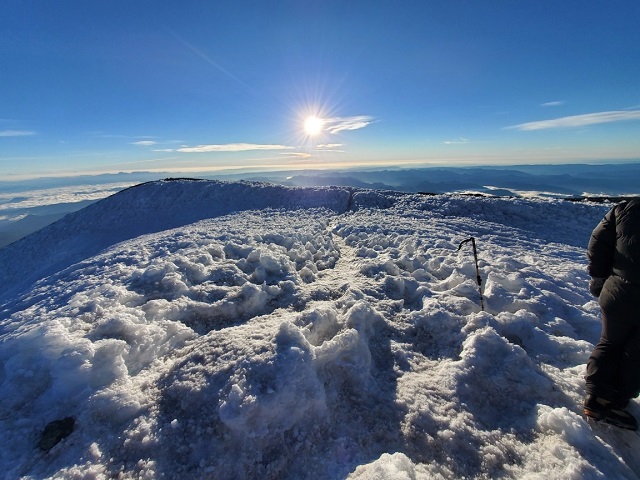 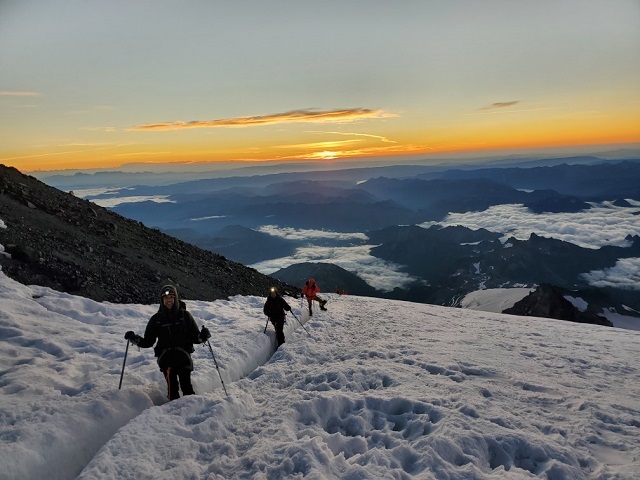 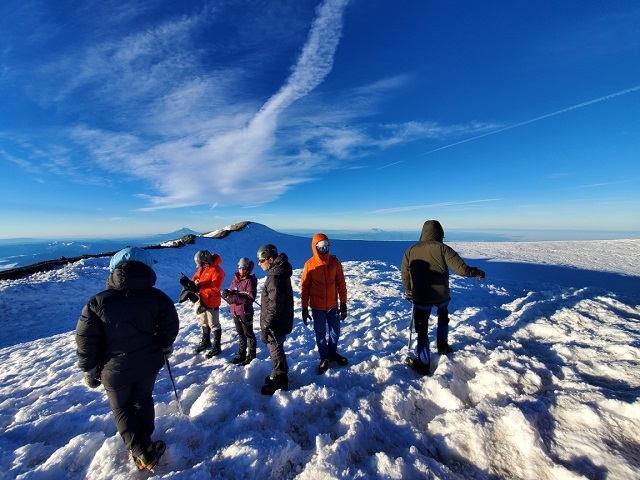 The Four Day Climb August 18 - 21 reached the summit of Mt. Rainier this morning at 6:05 am.  The teams enjoyed clear skies and a light breeze during their climb.  They began their descent from the crater rim at 7:20 am to return to Camp Muir.  At Camp Muir they will repack and take a short break before continuing the final 4,500' descent to Paradise. 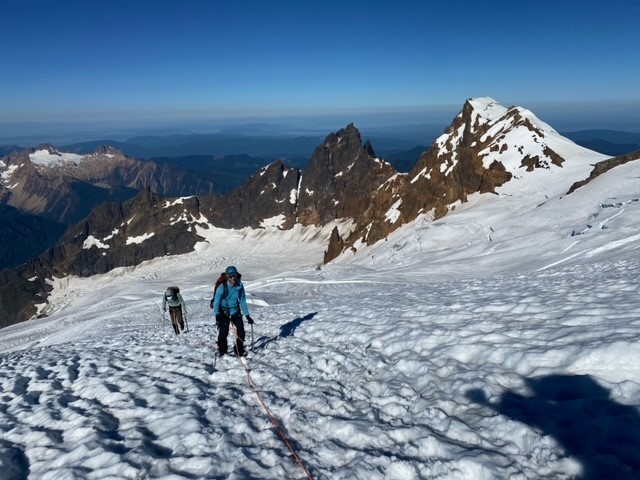 The Mt. Baker Easton Glacier Team was on the summit of Mt. Baker at 11:24 am today. RMI Guide James Bealer reported a "Blue Bird" day of climbing, with clear skies, and warm temperatures. The team climbed in their t-shirts and only passed one team on the way to the top, perfect conditions. They are on their way back to camp where they will spend one more night before descending to the trailhead. The Four Day Climb led by RMI Guides James Bealer and Josh McDowell reached the summit of Mt. Rainier early this morning. The team had a little bit of weather, so they did not stay on top for long. The team is back at Camp Muir and will be arriving at Paradise in the early afternoon

The Four-Day teams reached the summit this morning at 5 am! RMI Guides Brent Okita and Christina Dale reported great route conditions and no winds on the summit. They are currently finishing their descent to Camp Muir for a quick break before packing up camp and starting their descent to Paradise in the summer sunshine.

Congratulations to everyone!  Special thank you to Lead Guide Christina, and to Trevor for all his help with me on the descent.  So very proud my son Christian Rainier Culbert summited a 2nd year in a row with RMI.  On an even more beautiful day this time when they got to see the sunrise from the summit.  I’ll always remember (rue?) the unique challenge of Disappointment Cleaver. Pre-dawn on the Ingraham Flats with Gibraltar Rock looming behind us in that early light, a canopy of stars just beginning to fade above us…a moment I will treasure.  Appreciated everything so much; RMI you are a credit to your stewardship of our beloved Mt. Rainier.

RMI Guides Seth Burns, Josh Geiser and Michael Murray reached the summit of Mt. Baker today with 100% of their team.  Seth reported a nice sunrise climb this morning via the Easton Glacier.  The team will return to camp for their final night on the mountain.  Tomorrow they will walk out to the trailhead and conclude their program.

Congratulations to the team!

The Four Day Climb Led by RMI Guide Bryan Mazaika reached the summit of Mt. Rainier early this morning. The team had clear skies above Camp Muir and a good climbing route. The team is on the descent and will be celebrating at Rainier Basecamp this afternoon.