The Four Day Climb June 8 - 11 led by RMI Guides Walter Hailes and Dominic Cifelli were unable to make their summit attempt this morning.  Strong winds and blowing snow made for unsafe climbing conditions and kept the team hunkered down at Camp Muir over night.  The telemetry from Camp Muir shows wind averages ranging from mid 20 to mid 60 mph over night with gusts up to 79 mph.  When the group radioed the office this morning they were experiencing estimated 50 mph winds. The team will be descending from Camp Muir today and return to Rainier BaseCamp.  Unfortunately, today was not their day to reach the summit of Mt. Rainier. The Four Day Climb May 27 - 30 led by RMI Guides Andy Bond and Alan Davis reported pockets of wind slabs on the steeper portions of the route which forced the teams to turn around at 12,800’.  They enjoyed a spectacular sunrise with great views as they descended to Camp Muir. 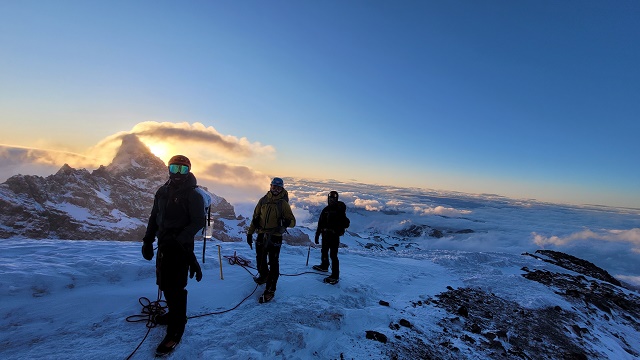 The Expedition Skills Seminar - Muir May 16 - 21, 2021 met on Sunday for their first day of training led by RMI Guides Hannah Smith and Nikki Champion.  On Monday, May 17th they loaded their packs and ascended to Camp Muir.  They have spent the last four days and nights at Camp Muir, training and practicing skills needed to climb big mountains.  Today they put that training to test and made their summit attempt on Mt. Rainier.  Unfortunately wind and new snow thwarted their effort.  The team is safely back at Camp Muir and will do some additional training this morning before packing their gear and descending from 10,000'.  We hope they learned a lot and enjoyed their experience even with the uncooperative weather.

RMI Guides Adam Knoff and Ben Ammon led their Four Day Climb teams to the summit of Mt. Rainier today.  The weather is clear and cold and the climb took approximately 6 hours from Camp Muir to the crater rim.  After enjoying some time in the crater and getting all the photos, the team will return to Camp Muir to pack up and then continue their descent to Paradise later today.  They will end their adventure with a celebration at Rainier BaseCamp.