The Four Day Climb led by RMI Guides Robby Young and Alex Halliday reached Ingraham Flats today but high winds forced the team to turn. They are currently at Camp Muir with winds blowing steadily at 40 mph. They will plan an early departure, and will be back at Rainier Basecamp in the early afternoon. Congratulations team!
Leave a Comment For the Team (1)

Disappointing to not quite get there but thanks to very experienced leadership making right calls! Great effort all!

The Four Day Climb September 6 - 9 reached the summit of Mt. Rainier today with new snow and windy conditions led by RMI Guides Robby Young and Josh McDowell. The teams did not spend much time in the crater, just taking a short break to hydrate and snack before starting their descent to Camp Muir. The program will conclude this afternoon at Rainier BaseCamp with a celebration of today's accomplishments. Congratulations to today's climbers!
Leave a Comment For the Team (1)

Great job Katelyn and Fred! So happy to hear y’all got to make it to the top this time around. I hope you enjoyed the climb and aren’t too sore afterwards! Love y’all.
Be safe coming down and getting home!

RMI Guides Eric Frank & Robby Young and their teams of Four Day Climbers reached the summit of Mt. Rainier this morning. They enjoyed some time in the crater on a beautiful morning and began their descent from the crater rim a little after 8 AM. The teams will return to Camp Muir and then continue down to Paradise. From there an RMI Shuttle will deliver them to Rainier BaseCamp. Their program will conclude with a celebration and cheers to their accomplishments over the last few days. Congratulations to today's climbers!
Leave a Comment For the Team

The Four Day Climb led by RMI Guides Robby Young and Leon Davis were standing on the summit of Mt. Rainier at 7 AM PT today. Robby reported a beautiful warm day of climbing with a light breeze. The team will spend some time on the Summit before starting their descent. Congratulations to today's teams!
Leave a Comment For the Team (2)

Awesome job guys! Love you both so much! Andy and Peter rock! The Four Day Climb led by RMI Guide Robby Young reached the summit of Mt. Rainier early this morning. Robby reported a beautiful chilly day of climbing. The current route taking his team 6 hours to ascend. Congratulations to today's team.
Leave a Comment For the Team (1)

Summit! The Four Day Team enjoyed beautiful weather and some time in the crater this morning. They began their descent from the crater rim a little before 8 AM. The guides reported very little wind and a beautiful day on the mountain. Once back at Camp Muir the teams will take a short break before continuing down to Paradise and eventually to Rainier BaseCamp. Congratulations to today's climbers!
Leave a Comment For the Team (1)

The Four Day Climb August 6 -9 reached the summit of Mt. Rainier this morning led by RMI Guides Robby Young and Alan Davis. Robby reported a beautiful day with no winds and a great route. The team enjoyed some time on the summit before descending from the crater rim en route to Camp Muir. The teams will continue their descent to Paradise and return to Rainier BaseCamp this afternoon. Congratulations to today's climbers!
Leave a Comment For the Team (2)

Thanks again for for the experience! Not all the way to the top for me, but still an unbelievable view and great challenge. You guys are professional, empathetic, and caring of your clients, and one couldn’t ask for anything more. I’ll be back for the challenge, and we’ll get it done.
Thanks,
Tony.

Have you guys made it back to Paradise? It’s almost 9pm. 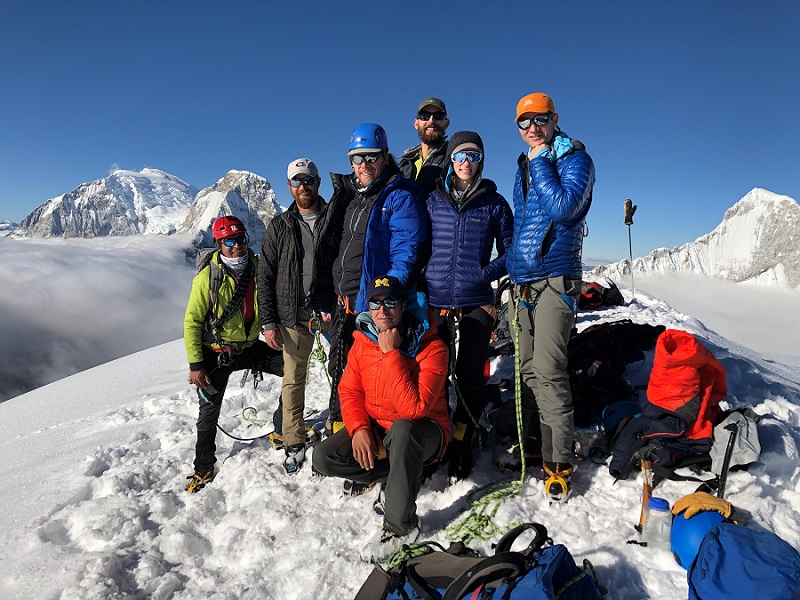 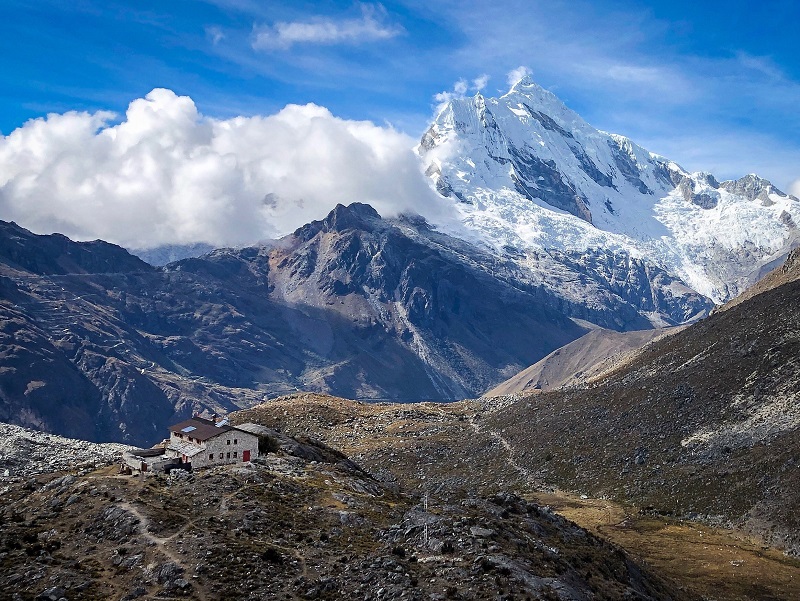 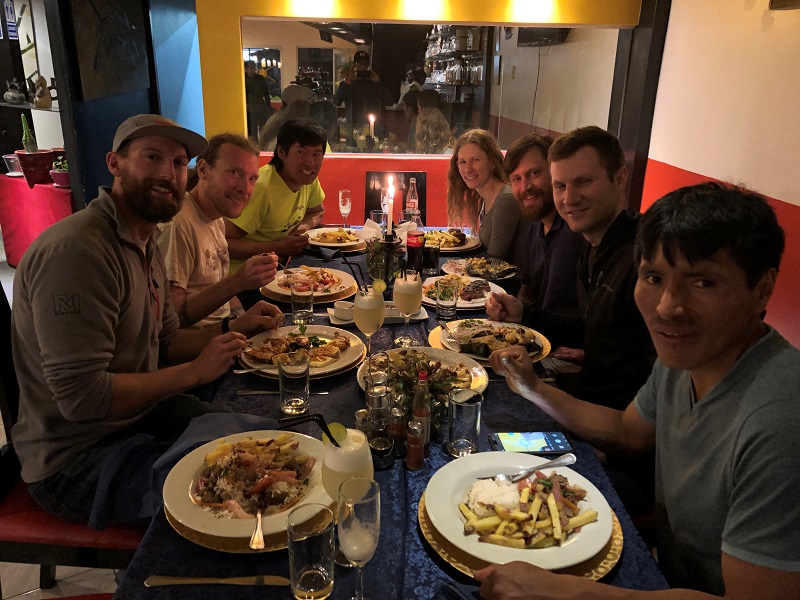 Greetings all, It’s been a whirlwind of a few days following our summit of Pisco on Friday. From the summit of Pisco onwards, we’ve been on the move, starting with a descent to Huaraz, a quick turn-around of packing, followed by a great celebratory dinner at our favorite Peruvian restaurant, Encuentro. Check out the photo of the feast that ensued, with props to Trey for going for the customary Peruvian dish, Guineau Pig (Cuy). He even ate it like a Peruvian, but we’ll omit a few details for our sensitive readers. A long bus ride back to Lima on Peru’s Independence Day put us in position for our long overnight flights back stateside. I just landed in Los Angeles, and other members of the team are doing the same in other cities across the US this morning. It’s amazing how quick it feels between the time we’re standing on the summit of our final climb, and the time when we’re heading through customs in a blurry travel haze. Our time in Peru, while it’s physically concluded, it’s a place that will certainly have a permanent impact on all members of our team. The mountains are very much unique on this planet of ours. The climbing is exquisite, the sunrises are the best in the world, the food rich, and most of all, the people are unbelievably welcoming and kind to us visitors. A big THANK YOU goes out to our guides and local staff down in Peru, including Alvorado Adventures guides William and Alfie, long time co-guides of RMI down in Peru. As well as our exceptional chef Emilio and his assistant Roger, who’s 5-star cooking was such a huge part of our experience and our success. That’s all until next season. Thanks for following along blog fans. Enjoy a couple pictures from our final summit! RMI Guide Robby Young and your favorite ESS-Peru Team

Robby ... thank you so much for all of the updates. You have some excellent writing skills! And thanks for getting everyone thru unscathed. Enjoy some downtime!!!

Hello world, We woke up to crystal clear skies last night, which hasn’t been the norm this season here in the Cordillera Blanca. But this beautiful night so happened to coincide with our climb of Pisco...just our luck! It was a really long day to say the least. It’s a tricky walk for the first several hours just to reach the glacier; up and over the moraine, across a boulder covered rock glacier, and up steep trail and slabs, all done in the dark. The stars were out which made for some wonderful views at breaks. A few more hours of dark while ascending snow and ice and the we finally saw some sun...which proved to be one of those classic Cordillera Blanca sunrises that are hard to describe. Just spectacular! A few more hours and we found ourselves just under 19,000’, on the summit of Pisco. We were above a thick cloud deck and the highest peaks of the Range were penetrating the clouds all around us. It was a special moment for this team who put in a lot of hard work and dedication into their climbing adventure in Peru. We stayed on top and soaked it all in for almost an hour before we walked down into the clouds for a long retreat back to Base Camp. All in all, 12.5 hours, Base Camp to Summit to Base Camp. We took the afternoon to get super tranquilo, as tomorrow, our journey back to civilization begins. RMI Guide Robby Young, Alfie, William and Team ‘Fuerte’

Congratulations to the whole team for an amazing climb!  And thanks to Robby, William and Alfie for getting the team out and back successfully and safely! 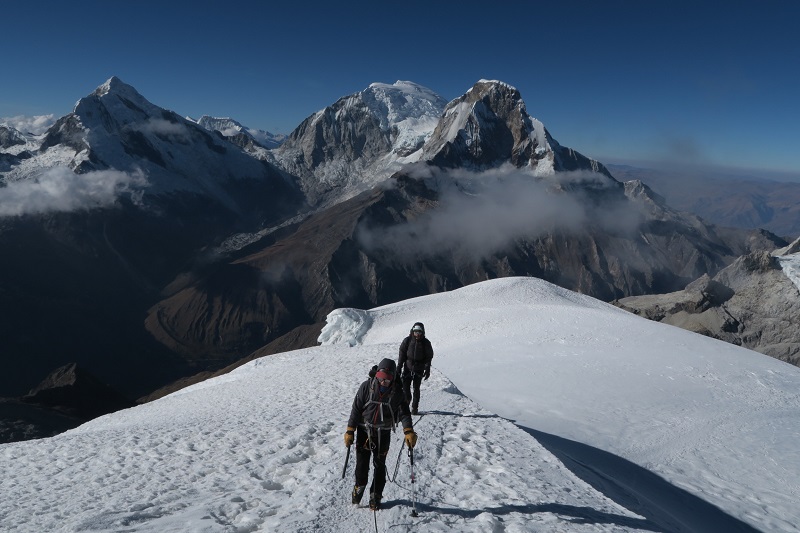 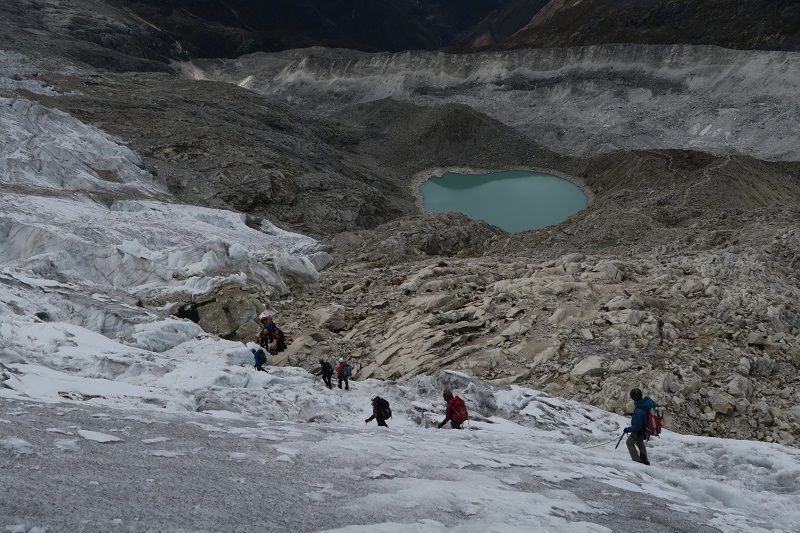 RMI Guide Robby Young checked in with us after their Pisco Oeste summit bid. They were able to summit and had a good day on the mountain. They are back at their camp for the night and will continue on to Huaraz tomorrow.

Congratulations and well done to all!!!

Wonderful pics!  Looks like an incredibly arduous accomplishment.  Congratulations to all the team; proud of you and looking forward to hearing the stories!

Next Page
Filter By:
check the Summit Registry try our Adventure Finder alerts for 2022 RAINIER DATES
Back to Top