The Four Day Climb August 17 - 20 led by RMI Guides Mike Walter and Nikki Champion reached the summit of Mt. Rainier this morning.  Mike reported moderate winds and a busy route.  Camp Muir sandwiched between two layers of clouds, dense clouds above Camp Muir and a light marine layer above Paradise currently.  The climbers will take a short break at Camp Muir to repack and re-hydrate before starting down to Paradise.  Once at Paradise the shuttle will return the climbers to Rainier BaseCamp where they will conclude their program with a short ceremony.

Yay! Well done Team! So happy for you all!

Mt. Rainier: Teams Turn due to Wind and Precipitation The Four-Day climb led by Pete Van Deventer and Alex Halliday turned around at 12,300’ this morning. The teams were facing 45 mph gusts as a wet cloud cap descended on them. They reported that the weather at Camp Muir was far more favorable with a light breeze to welcome them.

The teams are on their descent back to Basecamp, with warm showers and good food in their sights.

Been following the blog all summer, making my own attempt on 8/29.  Curious if that picture is from
Today and where is it on the route?

Bummer about the wind but congrats on getting that high!

Mt. Baker: Bealer and Team get 100% to the top via the Easton 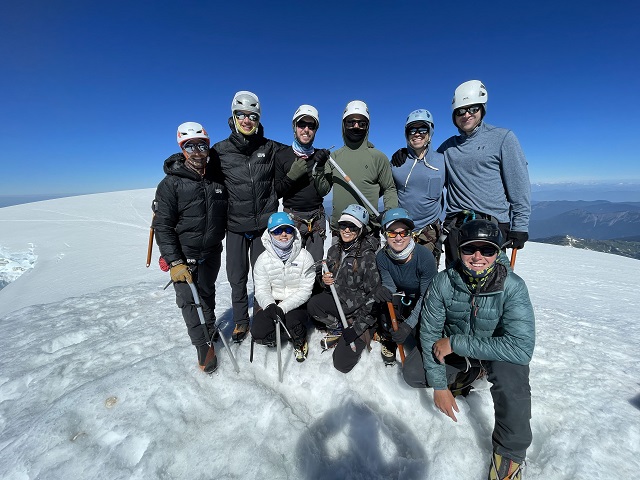 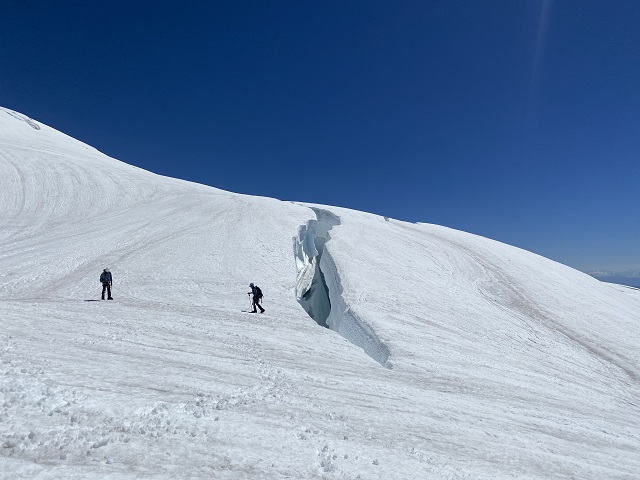 RMI Guide James Bealer checked in from the summit of Mt. Baker this morning.

After a warm walk into camp, the team enjoyed their breakfast before starting their ascent in the mid-morning. They stood atop Mt. Baker (Komo Kulshan) at around 11 am this morning. 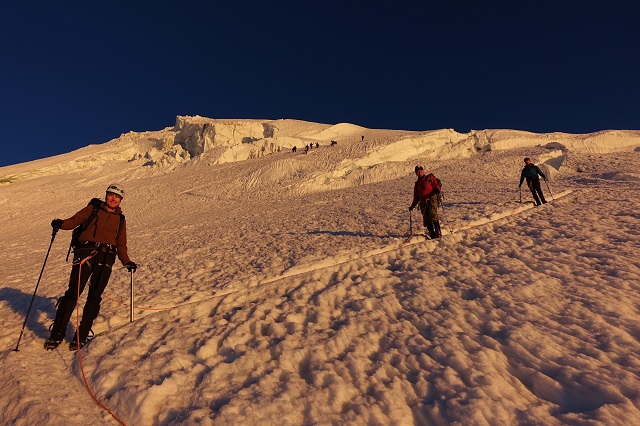 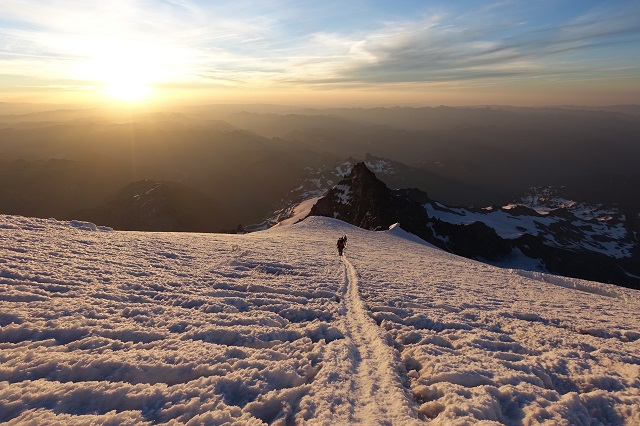 The Five Day Climb July 21 - 25 reached the summit of Mt. Rainier this morning led by RMI Guides Nikki Champion & Joe Hoch. The teams reached the summit early this morning and were well on their descent around 7 am. RMI Guide Trevor Katz provided the photos from the teams descent from the crater rim.  Once back at Camp Muir everyone will repack and continue another 4.5 miles to Paradise.  They will then transfer to Rainier BaseCamp for a celebration and conclusion of their program.

Mt. Baker - Easton Glacier: Burns and Team 100% to the Summit

We are happy to report that the entire team stood on top of Mt. Baker this morning. We had clear skies and spectacular views of Washington’s volcanoes to the south. The team climbed strong. We're on the descent and headed back to the trailhead.

That was Kristian Whittaker’s 25th Birthday - climb.  How cool he summited with his sister, Gabriella and her boyfriend Leif.  I, Erika, was so fortunate to meet up with the kids at Camp Muir and walk back to Paradise with them and with Brent Okita and my good friend, Anne M.  So grateful for this day back on Mt. Rainier with both my kids. :).  Sorry I didn’t get to see any of the RMI office staff when I was at Basecamp.  Maybe next time. The Climb for Clean Air Team along with their RMI Guides Mike King and Abby Westling reached the summit of Mt. Rainier Early this morning. Mike King reported a good route, clear skies, but strong winds on the summit. The team spent a short time on top celebrating before starting their descent.

The funds raised by these climbers will support the American Lung Association’s mission of saving lives by improving lung health and preventing lung disease.

Congratulations team for your success on and off the mountain!

Congratulations! You all did fantastic and you put in the work! So proud of your fundraising and climbing efforts.

YESSSSSS!!!!! Now, unlike myself, come down gracefully…;) 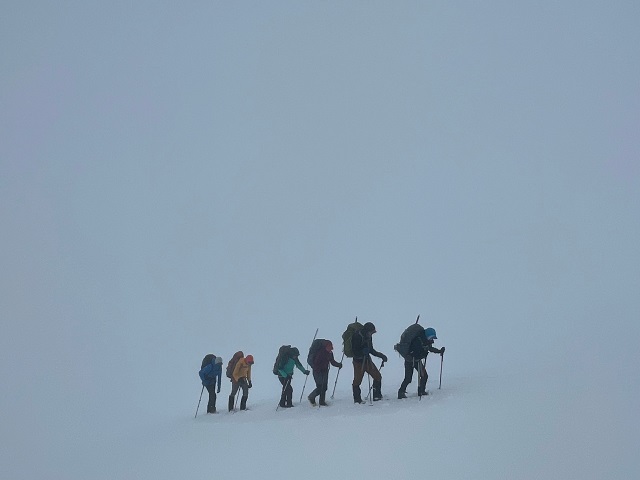 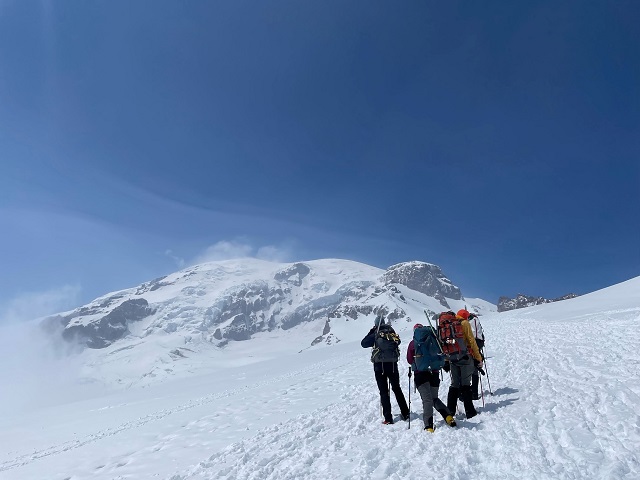 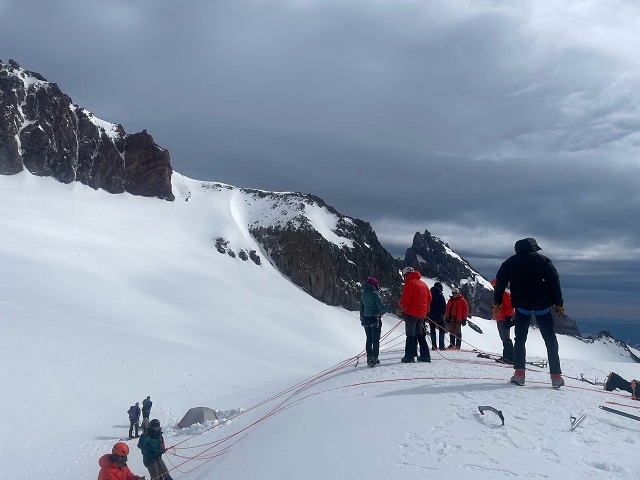 The Five Day Climb June 11 - 15 led by RMI Guides Brent Okita and Dominic Cifelli was unable to make their summit attempt due to avalanche danger.  The teams enjoyed two nights at Camp Muir with some good weather which allowed for training opportunities.

The Four Day Climb June 6 - 9 spent a windy night at Camp Muir last night.  High winds and deteriorating weather kept the group at Camp Muir and unable to make a summit attempt.  RMI Guides Seth Burns and Grayson Swingle reported consistant winds 30-40 mph with gusts up to 50 mph.  The teams started their descent from Camp Muir around 8 am and will be returning to Rainier Basecamp later this morning.

Leave a Comment For the Team
Filter By:
check the Summit Registry try our Adventure Finder
Back to Top