The Four Day Climb led by RMI Guides James Bealer and Josh McDowell reached the summit of Mt. Rainier early this morning. The team had a little bit of weather, so they did not stay on top for long. The team is back at Camp Muir and will be arriving at Paradise in the early afternoon 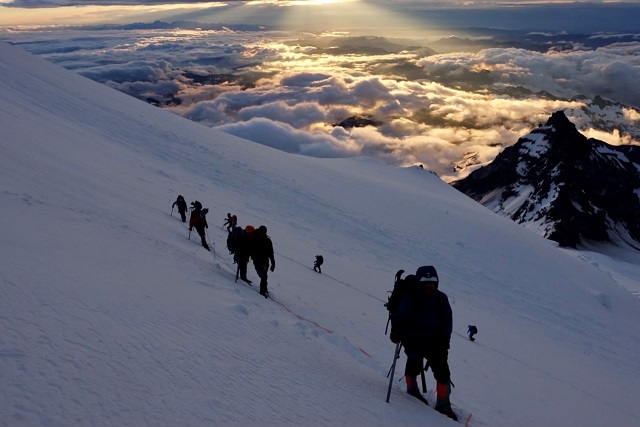 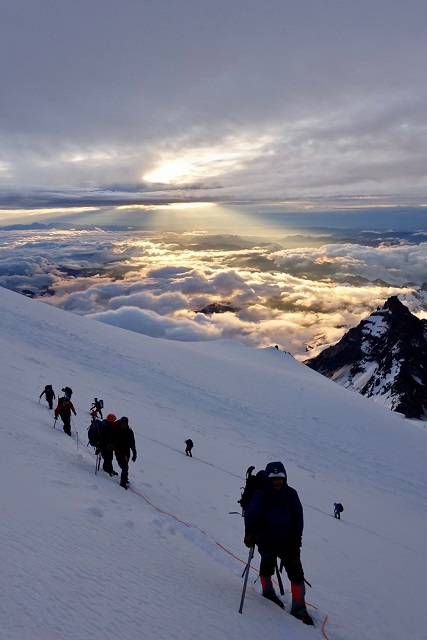 The Four Day Climb July 4 - 7 led by RMI Guides Dustin Wittmier and Josh McDowell led their teams to the summit of Mt. Rainier today.  The guides reported windy conditions on the mountain but an overall clear and sunny day.  They are currently at Camp Muir and will pack and ready for the remainder of their descent to Paradise.

Wow!! So proud of the whole team and especially the Larson sibs! Thanks to the guides for keeping them all safe. What an adventure!!

The Four Day Climb led by RMI Guides Pete Van Deventer and Josh McDowell reached the summit of Mt. Rainier at 6:45 am.  Pete reported clear skies, calm winds of about 5 mph, and a good route with easy walking. It took the team 5 hours and 45 minutes to get from Camp Muir to the Summit. The Mt. Rainier Summit Climb team, led by RMI Guides Mike King and Josh McDowell, called in from Camp Muir. There are six inches of new snow and winds that drifted the snow to knee deep at Camp Muir. The team is doing fine and will ascend up to Ingraham Flats before they begin their descent back to Paradise.
Leave a Comment For the Team (1)

Thanks for posting.  Thinking of y’all. Summit! Mt. Rainier received some new snow over the last week filling in the route but today's climb was able to persevere and make tracks to the top. We have had some teams as well as route workers chip away at it when weather and conditions warranted, which helped tremendously. Thank you to all of them and congratulations to today's summit climbers! RMI Guides Brent Okita & Josh McDowell
Leave a Comment For the Team (1)

Thankful to have been a part of this Team and can’t thank the amazing RMI guides like Brent and Josh enough!!  The entire RMI Team is top notch!!

The Four Day Climb September 6 - 9 reached the summit of Mt. Rainier today with new snow and windy conditions led by RMI Guides Robby Young and Josh McDowell. The teams did not spend much time in the crater, just taking a short break to hydrate and snack before starting their descent to Camp Muir. The program will conclude this afternoon at Rainier BaseCamp with a celebration of today's accomplishments. Congratulations to today's climbers!
Leave a Comment For the Team (1)

Great job Katelyn and Fred! So happy to hear y’all got to make it to the top this time around. I hope you enjoyed the climb and aren’t too sore afterwards! Love y’all.
Be safe coming down and getting home!

The Five Day Climb August 25 - 29 reached the summit of Mt. Rainier on Wednesday evening. RMI Guides Pete Van Deventer and Josh McDowell reported a light breeze and clear skies. The weather at Camp Muir this morning is cloudy with a soaking rain. The team is hoping the rain dissipates for their departure and walk down the Muir Snowfield to Paradise. The team will celebrate their adventure in Ashford later today and conclude their program. Congratulations to the Five Day Climber!
Leave a Comment For the Team (2)

Way to go, dad! What an amazing accomplishment. . . You never cease to amaze us! We love you and are so proud of you!

Safe journey to the mainland.

It's another beautiful day and the Four Day Climb teams are enjoying clear skies and light winds as well as a full moon last night. The teams reached the summit of Mt. Rainier around 5:30 AM. With the nice weather they enjoyed some time in the summit crater before starting their descent. The team will continue down to Paradise later this day and conclude their program with a celebration at Rainier BaseCamp. Congratulations to all the climbers!
Leave a Comment For the Team (2)

Congratulations to Caleb and the entire crew!

Great job!  We can’t even see the mountain today so glad you got up it!  I am excited to see the pictures!