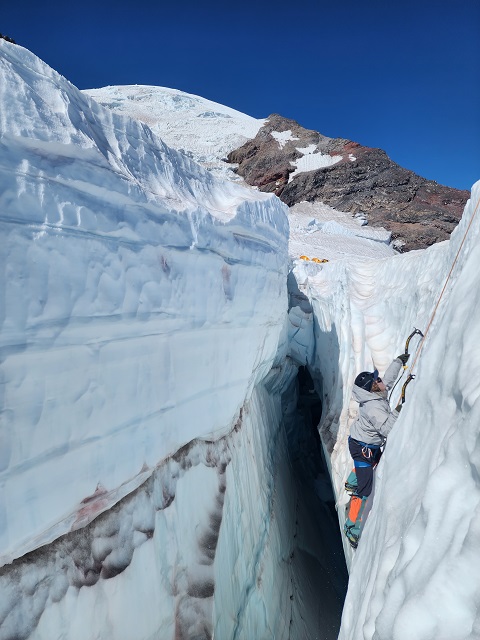 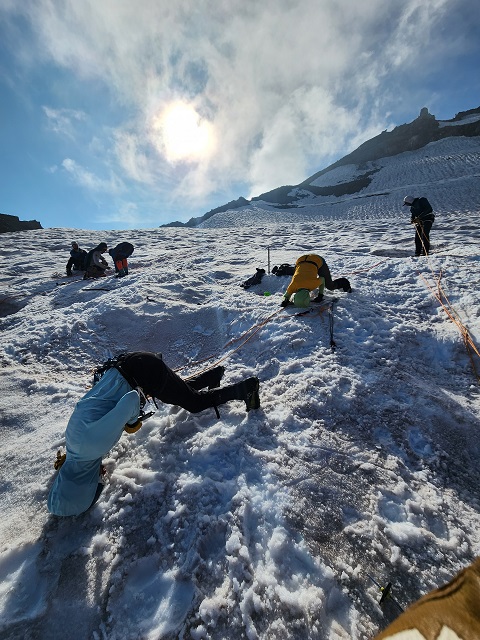 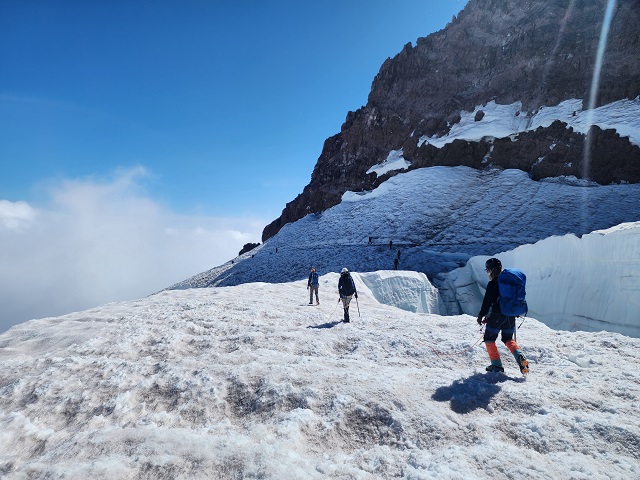 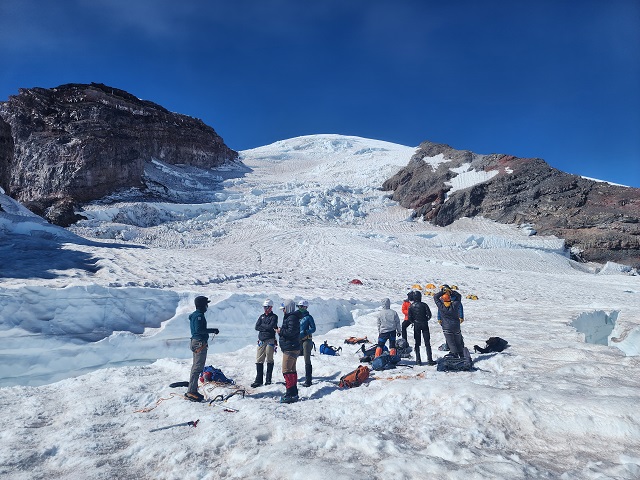 RMI Guides Hannah Smith and Steve Gately and the Expedition Skills Seminar - Muir Team spent a fun week on Mt. Rainier learning new mountaineering skills such as snow & ice anchors, crevasse rescue, ice climbing, fixed line travel, belaying and other technical skills needed to tackle the world's greatest peaks. The team spend their time training on the Cowlitz and Ingraham glaciers that surround Camp Muir and made it to Ingraham Flats at 11,200' to enjoy the incredible views of other peaks in the Cascade Range.

The Four Day Climb August 28 - 31 led by RMI Guides Avery Parrinello and Jack Delaney were unable to summit today.  Climbers reached 12,300, the top of Disappointment Cleaver, before deciding to turn back due to unfavorable route conditions and warm temperatures.  The teams were back to Camp Muir just after 7 am.  They took some time to repack before beginning their descent from Camp Muir back to Paradise. We expect the groups to be at Rainier BaseCamp in the early afternoon.

The Four Day Climb August 25 - 28 was approaching the crater rim of Mt. Rainier at 6:40 am led by RMI Guides Alan Davis and Seth Burns.  Alan reported climbing time from Camp Muir to the summit was 6 1/2 hours for the teams this morning. It's a beautiful day to be in the mountains with clear skies and light winds. The teams will enjoy some time at the summit today before retracing their steps and returning to Camp Muir. After a short time at Camp Muir, they will continue the final 4,500' to Paradise and conclude their program at Rainier BaseCamp later this afternoon.

RMI Guide Tatum Whatford radioed at 7 am that the first rope teams of the Four Day Climb August 22 - 25 were reaching the crater rim.  The remaining teams were 10 minutes out. Tatum reported a beautiful morning on the mountain with no wind and a very good route. Once they spend a bit of time on the summit, Tatum along with RMI Guide Alex Halliday will lead their climbers back to Camp Muir where they will have a quick break to re-organize and pack for their remaining descent to Paradise.  The teams will conclude their program this afternoon with a celebration at Rainier BaseCamp.

The Four Day Climb August 19 - 22 led by RMI Guides Casey Grom and Dustin Wittmier reached the summit of Mt. Rainier this morning.  As of 7 am the teams were enjoying time in the summit crater.  There are currently a few broken clouds but otherwise a clear and sunny day.  Teams will be returning back to Camp Muir and then descending the remaining 4.5 miles to Paradise.  There program will conclude with a celebration at Rainier BaseCamp later this afternoon.

My son Lucas was roped up with each of the guides at some point during the climb and had nothing but praise for all of them.  My wife and I want to thank Mira, George, Casey, and Dustin for leading a safe, informative, and successful climb!  Cheers to all of you!

RMI Guides Matias Franics and Seth Burns led their Four Day Climb August 16 - 19 teams to the summit of Mt. Rainier this morning. The teams reported good conditions with a bit of increased wind and some light precipitation on their descent.  Once back at Camp Muir they will have a short break before continuing the final 4,500' down to Paradise to complete their climb.  They will conclude their program at Rainier BaseCamp this afternoon with a celebration ceremony.

The Four Day Teams August 10 - 13 led by RMI Guides Steve Gately and Avery Parrinello reached the summit of Mt. Rainier this morning.  Clear skies and warm temps were enjoyed by the climbers.  Around 7:30 am the teams started their descent from the crater rim.  All teams will return to Camp Muir for a quick break before continuing the remaining 4.5 miles and 4,500' to Paradise.  They will conclude thier program with a celebration at Rainier BaseCamp later this afternoon.

Way to go!  Great achievement on a beautiful day!

The Four Day Climb July 26 - 29, 2022 reached the summit of Mt. Rainier early this morning.  RMI Guides Alan Davis & Dustin Wittmier led today's climbers to the crater at 14,410'.  Warm temperatures and clear skies continue, allowing great views in all directions. The team began their descent from the crater rim around 6:20 am and are making their way back to Camp Muir.  After a quick stop at Muir, the teams will continue the final 4,500' descent to Paradise and transfer to Rainier Basecamp.  The team will conclude thier program this afternoon with a celebration. 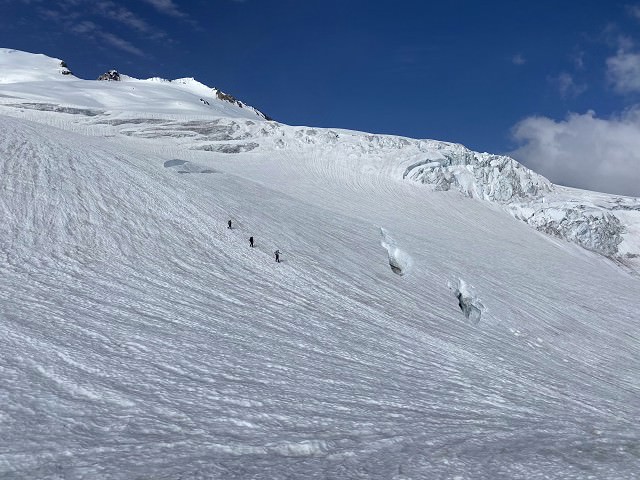 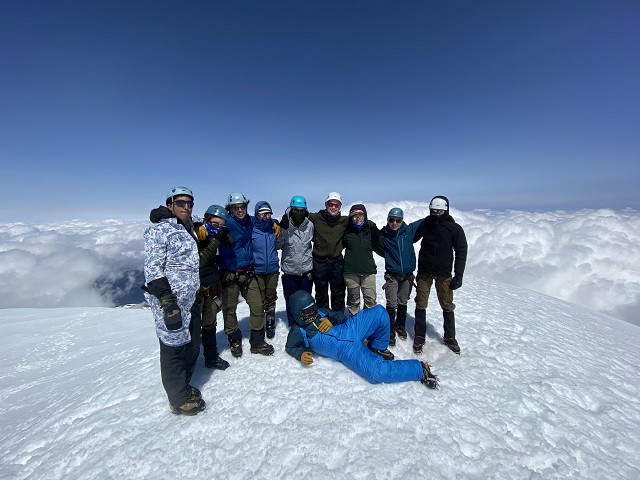 RMI Guides Abby Westling, James Bealer, and teams stood atop Mt. Baker yesterday. After waiting out the rain all night, they departed camp in the morning and enjoyed the daylight during their ascent. The teams made it back to camp yesterday evening to enjoy dinner and some well-deserved rest. They will walk out of camp today.

RMI Guides Dustin Wittmier & Joe Hoch led their Four Day Climb June 26 - 20 teams to the summit of Mt. Rainier this morning. Dustin reported windy conditions with a lenticular cloud above them for most of the climb.  However, the cloud had dissipated as they reached the crater rim and they were enjoying the sunshine as they crossing the crater to Columbia Crest. After celebrating on the summit, they will descend to Camp Muir, repack and continue down to Paradise.  We look forward to meeting the teams at Rainier BaseCamp later today.