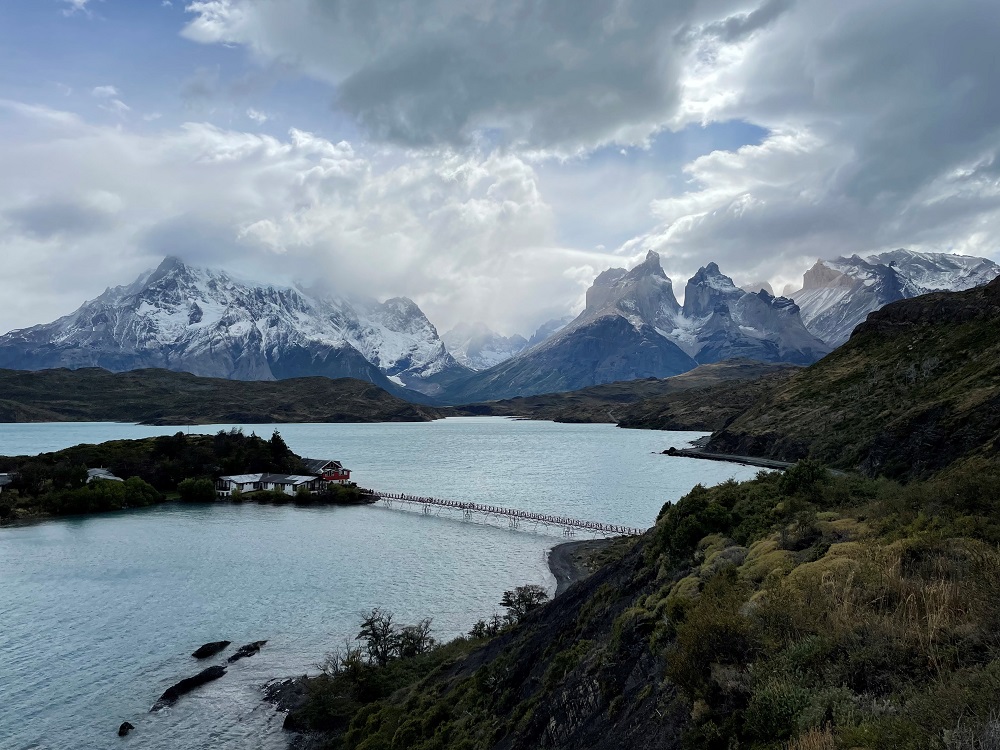 We had a nice short day today. The sun was out and made for the quick 4 1/2 hour hike. We are back in Puerto Natales and looking forward to a nice dinner and some story telling from the eight days in Patagonia. Thanks for following along. 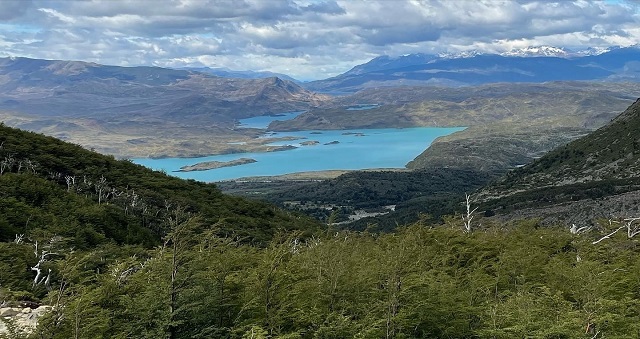 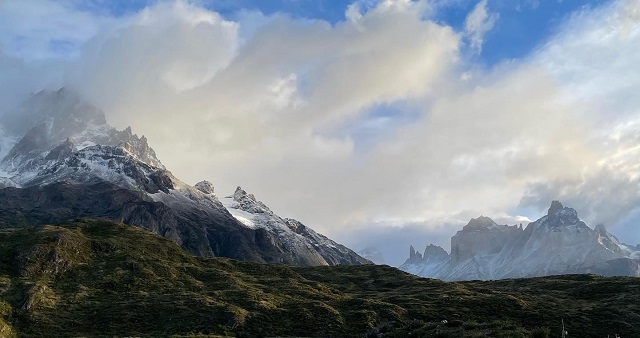 The traditional patagonia weather finally arrived today. Wind, sun, rain and clouds arrived in different combinations as we hiked into the French Valley. Once up the steep and narrow trail we got some views of the Cuernos (Horns), Paine Grande and a few of the granite spires. After a windy and cold break some snow began to fall at our lunch spot. Big swing from swimming five days ago. We walked to Cuernos Refugio and got to enjoy the views of Lago Nordenskjöld with all its changing turquoise hues. Tomorrow is our last day in the park and we’ll have finished our eight day and ninty-ish mile trek through Torres de Paine.

Thanks for checking in. 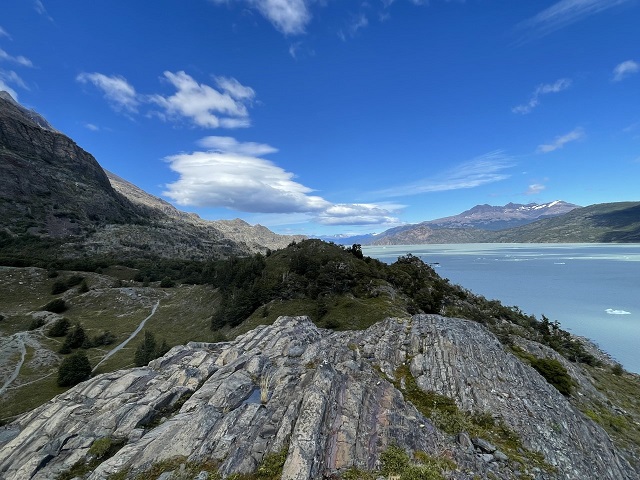 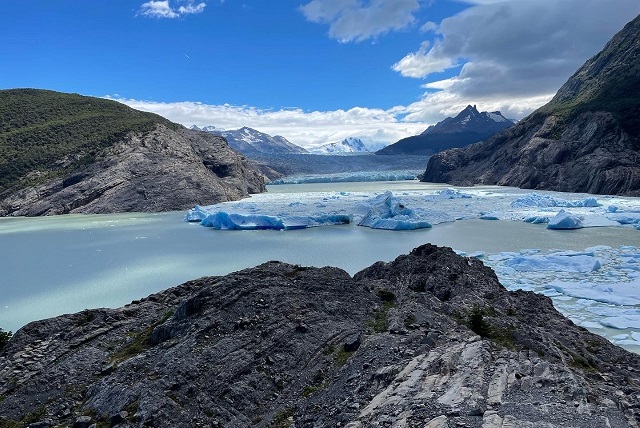 We got a casual start today. The day’s hike was approximately 8 miles to Paine Grande Refugio. We walked through the rolling and rocky hillside along Lago Grey. The landscape is mostly barren due to the 2011 fire that swept through the frontside of the “W”. The paste green colors of Lago Grey and the floating icebergs from glacier Grey took up most of our views. As we descended towards the Refugio we got a nice view of Lago Peohe (pay-way). Short day has us enjoying views of the Horns and Paine Grande, while some rain hits the windows of the bar, finally some traditional Patagonia weather.

Everyone is doing well and tomorrow we’ll see what the weather does regarding hiking into the French valley. Thanks for following along. 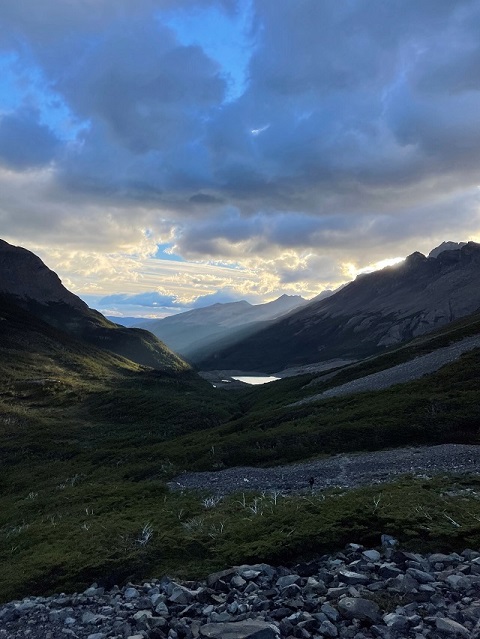 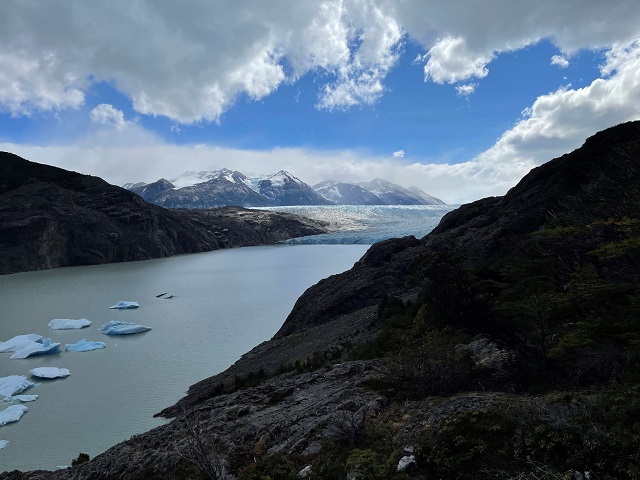 With the threat of rain, we got up and started hiking at 7 am. The rain didn’t materialize, and the day was much cooler than the last few. Blue skies and scattered clouds along with a persistent wind made for a scenic day ascending into John Gardner pass at 4000’. We got our first views of the Grey Glacier and its surrounding peaks. The Grey and Tyndall glaciers combine to form much of the southern Patagonia ice sheet. The contrast from the forested valley we had just walked through to one filled with ice that’s around 10,000 years old is quite the site.

We made the arduous descent down towards Refugio Grey. The 5400’ descent is tough on the knees and feet but this group of “Florida Men” stayed together, and we arrived a little under 9 hours. Boots off, refreshments in hand and looking forward to a good night’s sleep.

We’ll hike to Paine Grande tomorrow after a casual breakfast.

Thanks for checking in,

Our hike today was a gradual 1,200’ of vertical spread out over eight miles. We got some great views of the Dickson glacier and John Gardner pass. Most of the day was spent under a dense canopy of trees. The heat continues but with a breeze all day we weren’t inclined to go swimming in Lago Perros with it’s floating glacial ice bergs. This camp is well protected from the wind but we are anticipating some rain to begin tonight and might continue through tomorrow. We’ll get an early start in the morning due to the long day ascending and mostly descending from the pass. Wet/muddy trail will make it a more challenging day then it already is. Fingers crossed for clear skies tomorrow.

Thanks for checking in.

We got a little breeze today at times but that is about it. Clear blue skies and great views dominated the day. Our trail was rolling “Patagonia flat” which is some ups and downs. There was some good canopy to get out of the sun. As we got closer to Lago Dickson we got views of the glaciers that make up the eastern part of the Southern ice fields. Lago Dickson is a very scenic camp and today it was exceptional. Once at camp we got some refreshments and headed down for a swim to cool off. With the glaciers a few miles away, the water was colder but the diminishing ozone over this area makes for intense sunlight and radiation, i.e., warm sand after a cold swim. Showers & laundry having been achieved with a swim the team is finished with dinner.

Tomorrow we head to Los Perros. Wildlife update: we have seen small Patagonian parrots & large Andean condors. Fingers crossed we get some cooler weather tomorrow cause the glacier is much closer for tomorrow’s swim should it come to that.

Thanks for following along, 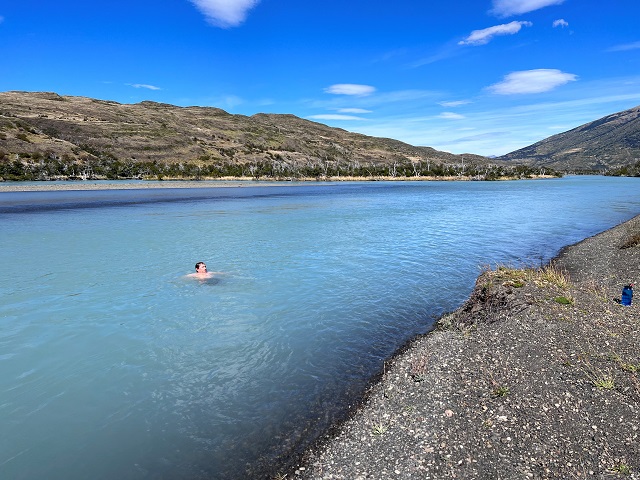 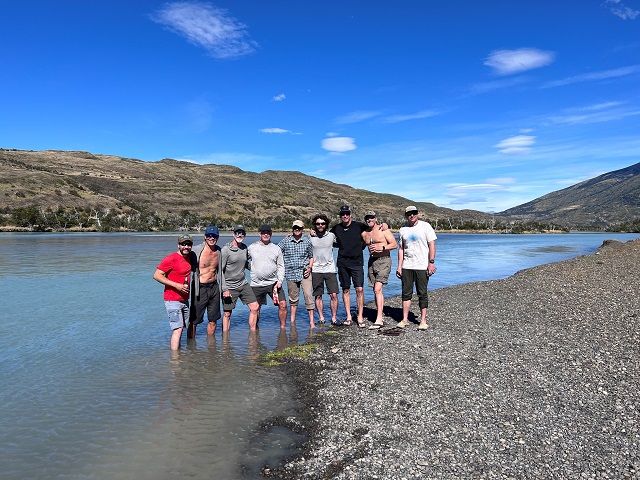 We had a restful night at Torres Central. No discotheque last night. Our hike took us on the first part of the “O” circuit through former estancia fields used to graze sheep & cattle. The trail then wound through a nice forest with a canopy that provided some relief from the sun and intense heat, abnormal for this area. Eight miles puts us in Seron camp at a former ranch cabin. The team got out of the sun and since we are experiencing a heat wave we took refreshments down to the Paine river, “Paine” meaning blue in the language of the original inhabitants of this area. The river is a pastel green from the glacial till and a little cold for this Florida based crew. I got a few of them in the shallow river for a quick swim by setting the example, leading from the front and all. The remainder waded in to soak sore feet & knees. With the swim counting as a shower and laundry we are sitting down for some Chilean wine and cheese before dinner, quite civilized. Tomorrow we hike to Lago Dickson, hoping for some respite from the heat but if not we have a lake to plunge into.

Thanks for following along. 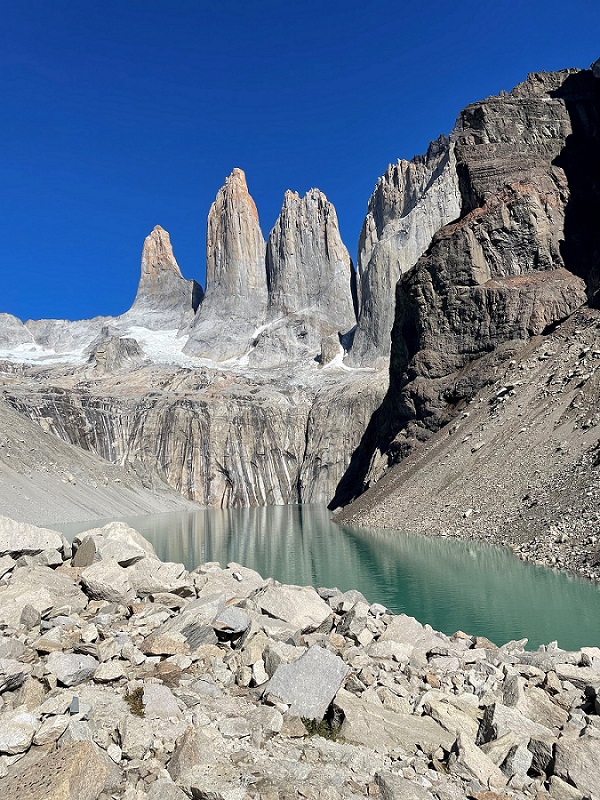 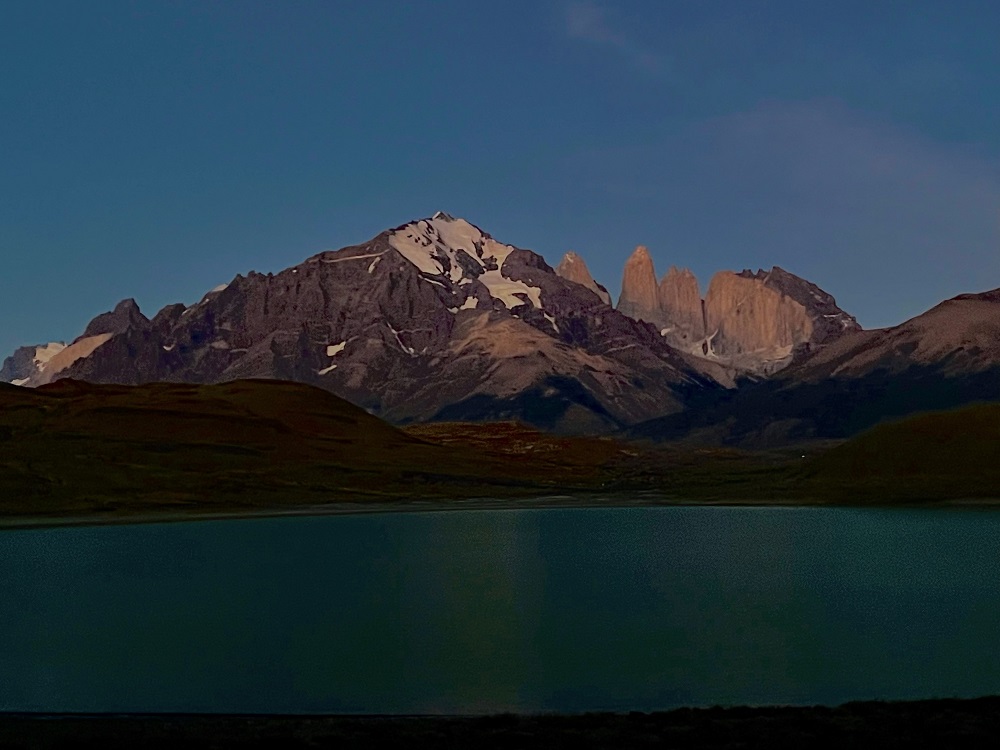 Your read that right, round 2 for RMI Torres del Paine Trek. Our team flew into Puerto Natales on the 19th. We spent the 20th getting gear ready and getting adjusted to the time zone change. Today our shuttle picked us up at 5 am and by 7:30 we were walking up hill. Our first day is up to see the Torres (towers) that the park takes it’s name from. Three granite spires that rise out of a alpine cirque that has a receding glacier and provide great views. It’s a tough day to begin our eight-day trek: 13 miles with 3,500’ up and back down to Torres Central. There was hardly a cloud in sight, no wind at Windy Pass and the heat was not what we’d have expected in Patagonia. Thankful for the shade we got from the forested trail while it lasted we enjoyed a good day and are now back at the Refugio. Tomorrow we’ll hope for some cooler weather but regardless head for Seron Camp over a short four-hour day. Thanks for following along. 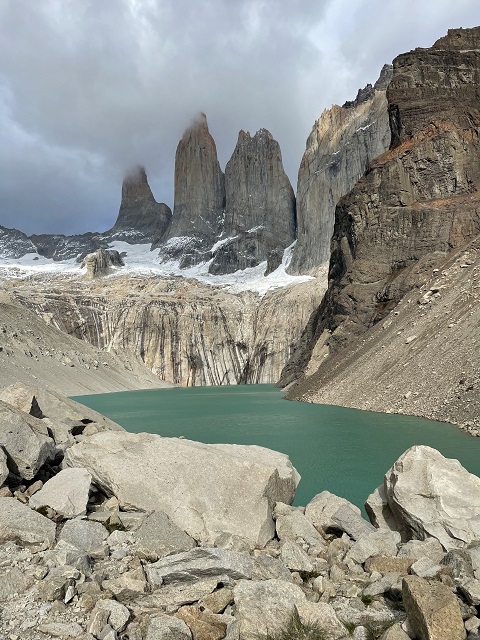 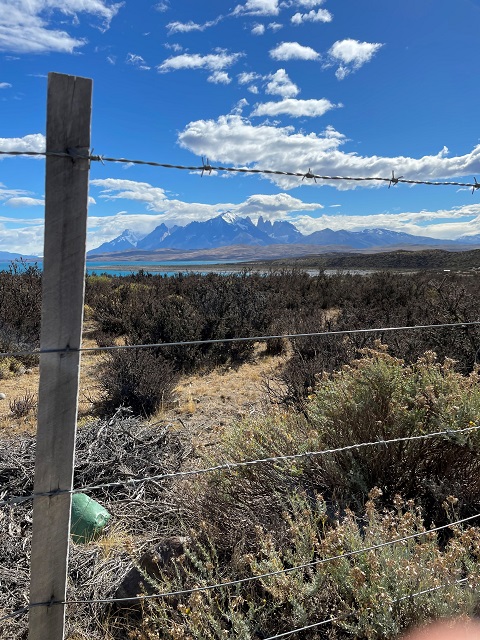 The estimated mileage today was 13.1. It was totally worth it. We left around 6 am and had the trail mostly to ourselves. The hike was mostly “matt approved” but it did require some climbing and large steps that after nine days made several of us glad that we were nearing the end of our trek. Last night in Refugio Torres Central there was a disco that kept some awake and those in tents dealt with a cantankerous set of crepuscular song birds that wouldn’t be silenced, but I digress. The Towers were out upon our arrival in the large granite cirque and the wind was moderate. We watched wannabe influencers take photos and more than a couple almost wreck themselves doing the “jumping” 80’s photo thing that won’t die. The contentious total was 93.4 miles and 16,000' elevation gain over the last nine days.

The entire group is showered and ready to dive into some pizza and continue to quench that irresistible thirst that has stalked us since Lago Dickson. When we distill the trip down, Patagonia is beautiful, sore feet were experienced by all, fun and laughter abounded and now two grown adults dressed in penguin onesies are delivering drinks to say “salud” to a great group and trip together.

F U N to folo Mike - Congratulation. Been a few years 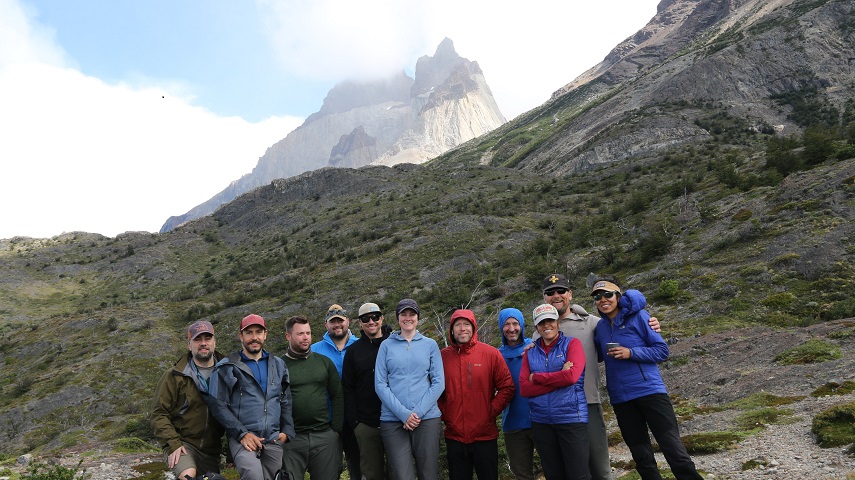 *retraction* for Doug’s dad, yesterday was 15.5 miles per Doug’s phone. Some people had 14 miles…. it’s was a contentious dinner conversation.

Today we left Francis Domes after a windy night. The dome fabric was blowing in the wind, tired hikers snored, and the geodesic dome frames shook at times. We had some uphill, downhill, “matt approved” terrain and some dry riverbed for trail. Most of the hike was along Lago Nordenskjöd which was windy enough to have white caps and spray. 5-6 condors soared above and one below us which is rare for these large birds with a 6’/2m wing span….mas o menos. We enjoyed some great views of the Horns and got our first glimpse of the Torres as we rolled into our refugio.

The insatiable thirst returned, and we are looking forward to our last day up to the Torres tomorrow morning. It has been a great trip regardless of the heavily debated terrain and mileage discussions. This group has been one for the record books…in a good way!

Thanks for following along.