The Four Day Climb August 29 - 1 September was unable to reach the summit today due to route conditions.  RMI Guides Pete Van Deventer and Dominic Cifelli lead their teams to Ingraham Flats at 11, 200', they enjoyed the views as the sun came up.  The team is now back at Camp Muir and will begin their descent to Paradise later this morning.

Mt. Rainier summit!  The teams led by RMI Guides Dave Hahn and Jack Delaney reached the top at 7:13 a.m.  They reported clear skies, a light breeze, and smoke to the East.  After spending some time at the crater rim marveling in the sights from the highest point in Washington, the team began their descent. Today's Mt. Rainier Summit Climb teams, led by RMI Guides Pete Van Deventer and Walter Hailes, turned due to hazardous route conditions.  The teams ascended to Ingraham Flats to watch the sunrise before descending back to Camp Muir where they had breakfast.  They left Camp Muir around 9:45 a.m. and are working their way back to Paradise. Due to overhead hazards, the Mt. Rainier Summit Climb, led by RMI Guides Mike King and Taylor Bickford, turned at Ingraham Flats.  They reported smoky skies and a busy route.  After packing up at Camp Muir, the team began their descent to Paradise at 9:00 a.m.

The Four Day Climb August 7 - 10 led by RMI Guides Dustin Wittmier and Avery Parrinello reached the summit of Mt. Rainier this morning around 6:30 am PT.  The team enjoyed a light breeze and good visibility under an overcast sky. They spent time crossing the crater to reach Columbia Crest, the highest point on Mt. Rainier and in Washington.  After taking all the photos and enjoying the views, the team left the crater rim just after 8 am PT.  They will travel 4.5 miles and 4,500' retracing their steps from early this morning to return to Camp Muir.  Once they have removed their glacier travel gear and repacked their backpacks, they will continue another 4.5 miles and 4,500' back to Paradise.

Way to go team!  My son Nick was part of this group and everyone is glad they reached the summit safely.
Great work guides! 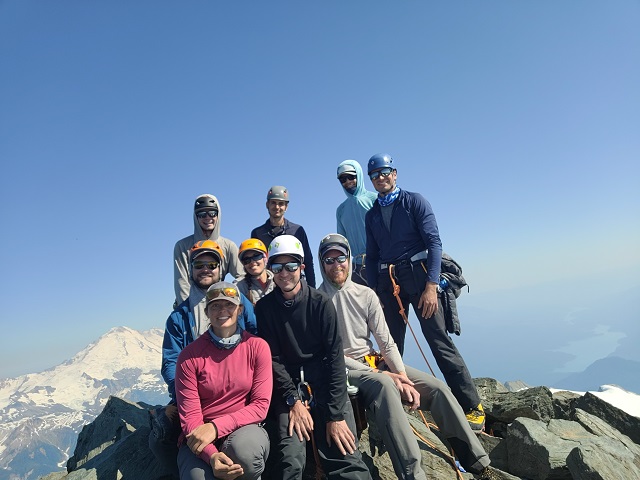 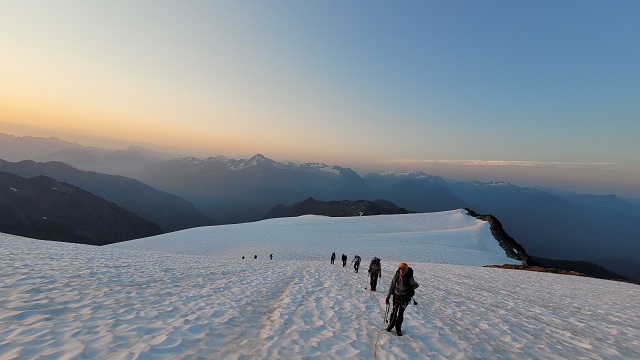 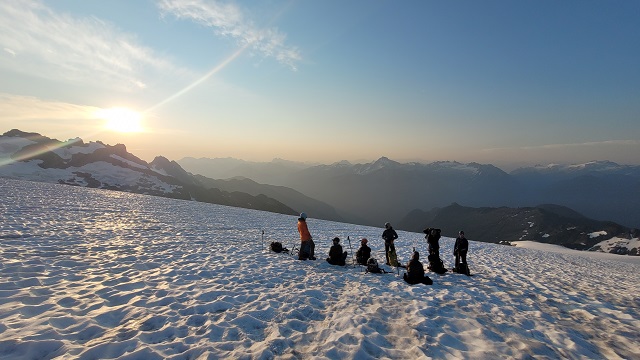 Hannah reported that the team was having a great day on the mountain with very few climbers on the route and fairly clear skies.  The team will return to camp for their final night on the mountain and walk out to the trailhead tomorrow to conclude their programs.

Paradise Seminar: Team Wrapping Up Their Week with a Successful Summit 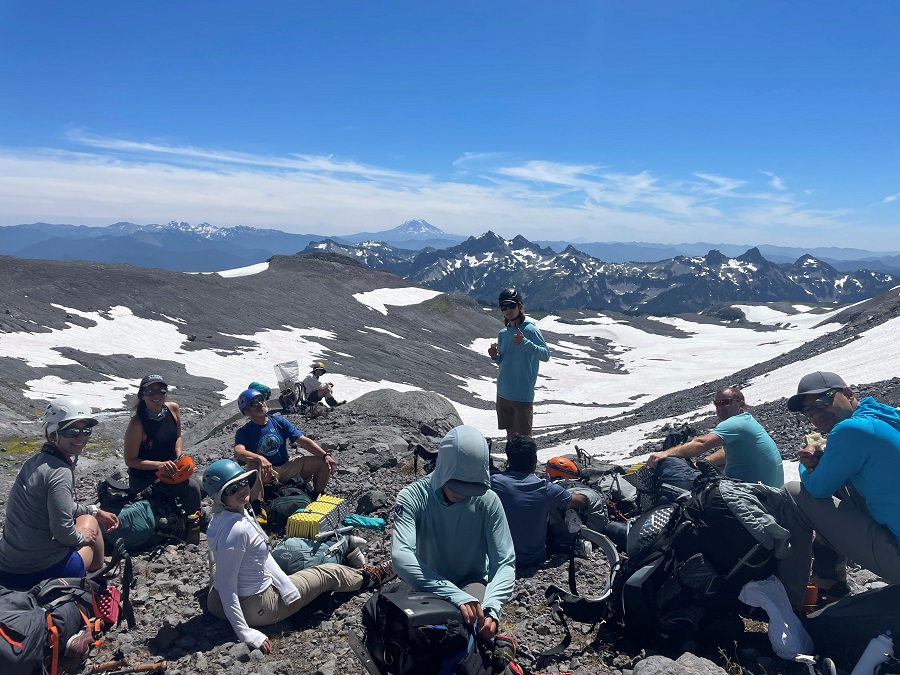 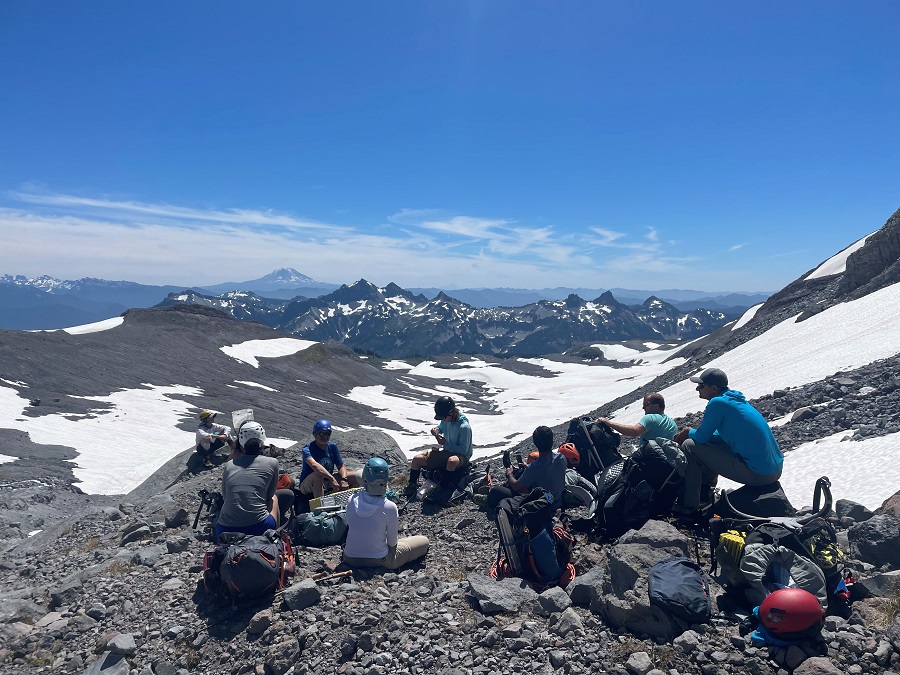 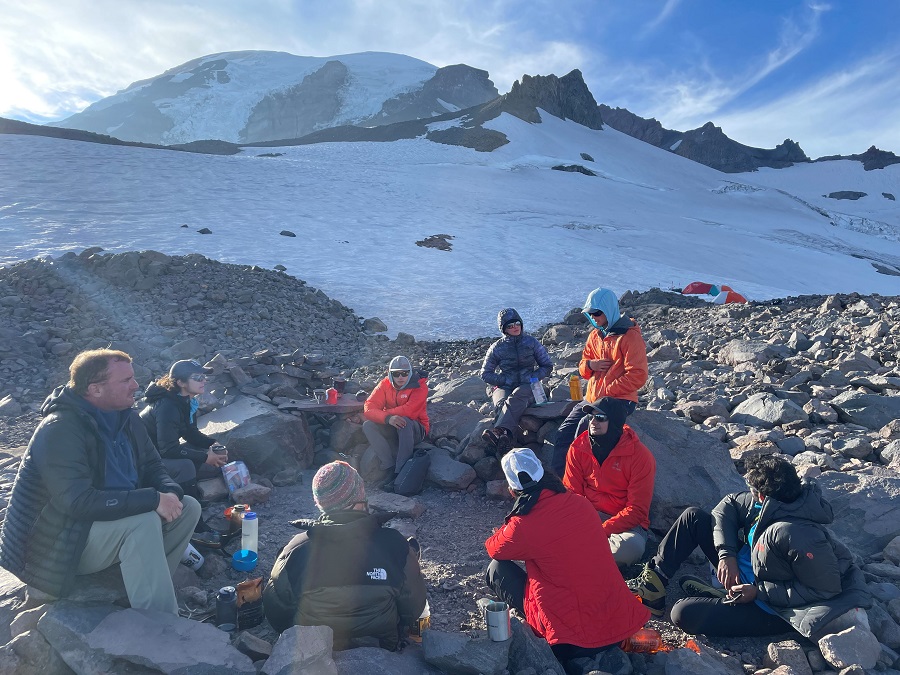 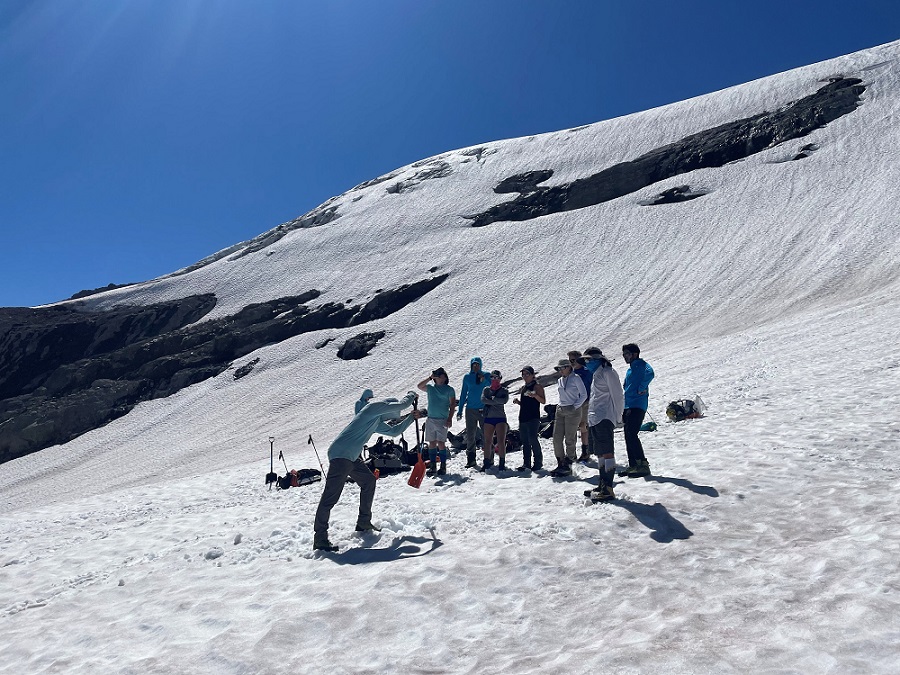 RMI Guide Dominic Cifelli led the Paradise Seminar team through training and to the top of Mt. Rainier this week!  Various mountaineering skills were taught in order to arm these mountaineers with bigger mountains goals as well as feeling more comfortable in their climbing abilities.

The team is currently on their descent from the Mt. Rainier summit and will finish their program with a celebration back in Ashford.

The Four Day Climb July 20 - 23 reached the 14,410' summit of Mt. Rainier led by RMI Guides Christina Dale and Nikki Champion.  Blue skies but chilly temps and winds around 20 mph accompanied them on their climb.  After enjoying the views from the summit of Mt. Adams, Mt. St. Helens and the Cascade range, the teams began their descent from the crater rim around 6:45 am.  Once they reach Camp Muir they will repack and continue their descent to Paradise (5,400').

Fantastic climb and amazing guides! So happy to be a part of this journey.

Clear skies and a bit of wind accompanied the Four Day Climb July 15 - 18 teams to the summit of Mt. Rainier this morning.  RMI Guides James Bealer, Joe Hoch and their climbing teams enjoyed a bit of time on top this morning before starting their descent from the crater rim around 7:20 am.  The teams have returned to Camp Muir and will take a short break to repack and refuel before continuing the remaing 4.5 miles and 4.500' descent to Paradise this afternoon.

Thank you to the entire RMI team for making this trip successful, safe and a huge amount of fun! 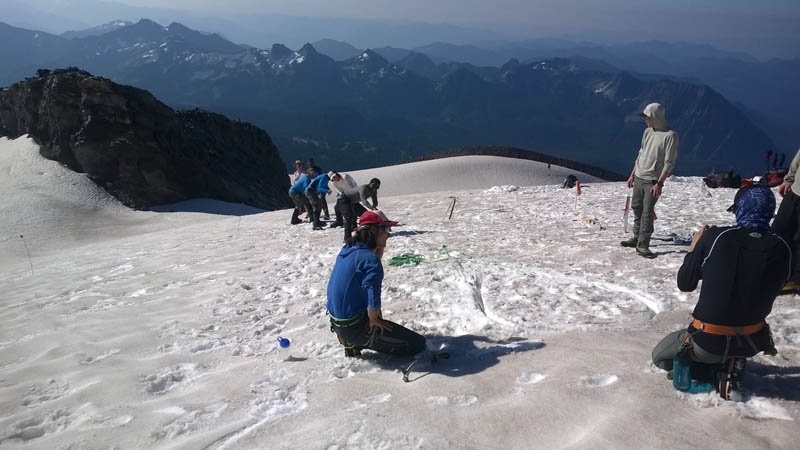 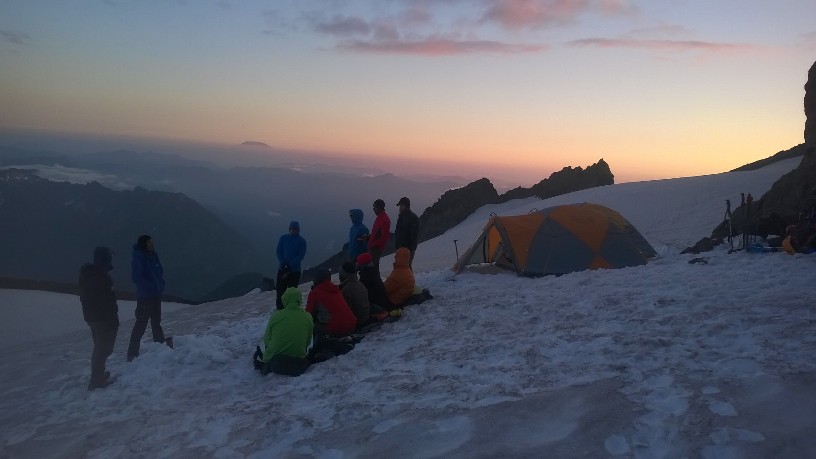 The Expedition Skills Seminar on the Kautz Glacier has been training on the mountain all week in warm temperatures.  This morning was their summit attempt.  Due to a significant amount of icefall on the route, the team had to abort their summit bid.  The team is safely working their way back to camp and are descending from the mountain today.

Did the Wilson still go, or did you have to go up the fan?

Good effort to the team! Any comment on where the icefall was and where they decided to turnaround?