RMI Guide Alex Van Steen recently presented at Sustainable Summits: The International Mountain Conference on Environmental Practices, hosted by the American Alpine Club in Golden, CO. Alex was invited to discuss RMI’s partner-building efforts on our Carstensz Pyramid Expedition. Carstensz Pyramid, a steep limestone peak located on the island of New Guinea and one of the world’s Seven Summits, is one of the least accessible peaks of the Seven Summits and presents a mix of environmental, cultural, and outfitting challenges. On major expeditions the success and overall experience of the adventure depends largely on the close ties of the team, including with local partners. RMI is very active in creating close-knit relationships with our local partners. To that end, Carstensz also best exemplifies RMI’s efforts in creating long-term and sustainable partnerships in leading our adventures and in our dedication to Responsible Climbing. At the Sustainable Summits Conference, Alex introduced the concept of “Giving Relationship” in developing partnerships to the gathering of land managers, climbers, planners and scientists representing the world’s mountainous regions. “The model that we propose is the model that RMI uses all over the world. The difference here is that Papua is so challenging on so many fronts and the culture is so significantly different than anything we’ve experienced anywhere else in the world. Our model is a social ethic, a little bit like “Leave no trace,” the environmental ethic, or “Do no harm,” the medical ethic, but focused in a positive manner: “Giving Relationship” is our social ethic,” explained Alex. To best explain the concept of “Giving Relationship,” Alex shared several stories from his time in Papua: “The essential question when I was speaking with [local Papuans] was, “If you want a partnership, what does partnership look like for you? What do you want?” “Moses Sondagau works with the local regency government. He and I walked together from one village, Sugapa, to another, Hitadipa, which was about four hours, and we had a significant time to chat. What I learned was that Moses had worked with tour operators for the past decade or so as a porter, and the abuses that he saw toward the porters spurred him to work for the government on behalf of his people. 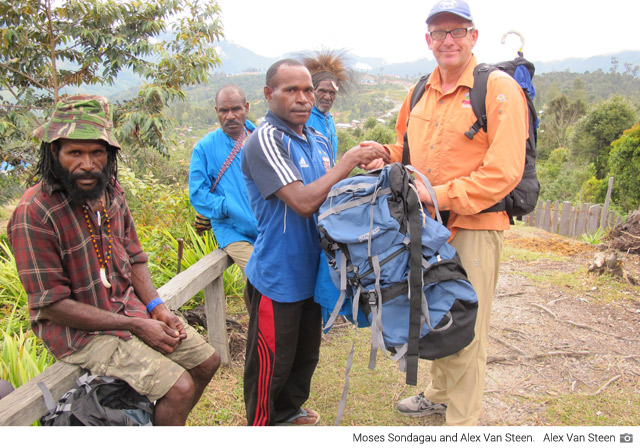 “Moses now ensures that commercial operators treat their porters well and pay their porters as promised. What he told me was only 75% of the porters had been paid as promised. His task is not an easy one because he is effectively policing both foreign operators as well as the Indonesian operators. That said, he was shocked because I spent so much time chit-chatting with him on the way to Hitadipa. I asked him about his family, I showed him pictures of my own family, and I engaged in what I consider just standard kindnesses that you would show to anybody who you were walking a few hours with, but he told me that no foreigner had ever expressed so much interest in him as a person as I did that day. This really rather shocked me. I told him, “Moses, you are an ‘usua me,’ you are a good man, you’re working on behalf of your people and you’re doing a hard job.” He sincerely appreciated that. “In this arena of going into schools and sports clinics and churches, I was invited and took the opportunity to speak at two church services, I assisted with an inter-faith Muslim/Christian soccer camp, and I spoke in two high school classrooms at an international school. One of my most intense experiences came in this arena. “We’d been hiking through the jungle all day and the rain was just incessantly pouring on us. We were coming into a village called Gamagae and all of a sudden I hear all these men yelling. As I am walking into town I see all these people running toward me and one of them was highly agitated, really waving his arms and yelling loudly. This is how I was introduced to Atan Topani. 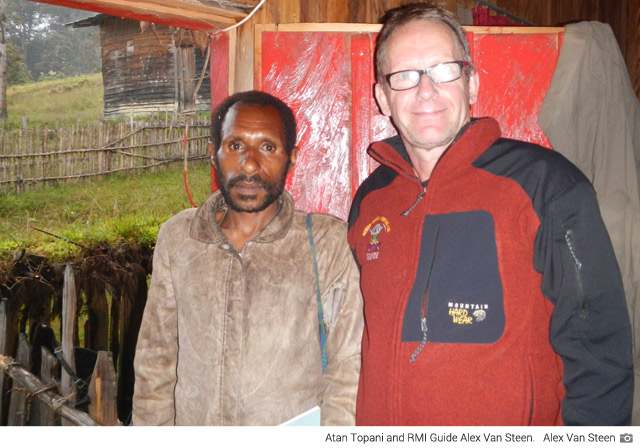 “I know a bit about Moni culture - I know that they speak loudly; I know that their language is clipped; I know that they don’t smile the same way that we smile, at least not right off the bat – so I was aware of that – but I also didn’t see any or didn’t hear any of the standard language that let me know that they were welcoming me. They were yelling but I wasn’t hearing ‘amakanea,’ ‘amakanenga,’ some of the welcoming phrases that I normally hear. “Atan was really upset because the last tourist group to come through had come into his church and made a mess. They cooked in his church and left garbage in his church and then left the village. Understandably, he was upset. He wants tourists. He really wants tourists. But he needs tourists to behave considerately. Atan and I spent about two hours doing what’s called “muna muna” - “men’s talk.” Together we developed the “Sugapa Route Visitor Protocols” for travelers: what to do or what not to do when you visit these villages. “Here again, the essential question was, ‘Atan, if you want a partnership, what does a partnership look like?’ And Atan says, ‘I want visitors, and they are welcome to use our church as shelter, but I want them to be considerate of my community.’ When I came home, I translated this document into Bahasa Indonesian, Dutch, German, Spanish, Japanese and Russian, and now they are ready to be posted in different villages along the Sugapa route.” Part of a “Giving Relationship” entails sitting down on equal terms and discussing the desires and needs of both parties. A simple concept, yet not always followed in many outfitting practices. “In my most recent trip, I spent just under a month and visited about ten communities, going village-to-village and connecting with random individuals. 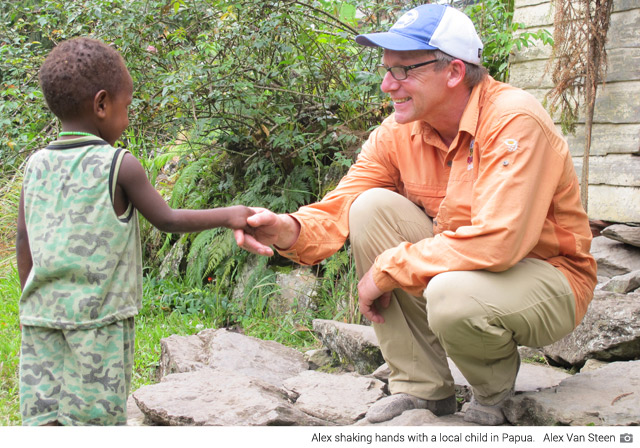 “One of the other cultural differences that really was striking to me was that even if you enjoy conversation or you consider yourself a patient person, you have nothing on the Moni. The Moni absolutely love to converse and converse. I found that I had to sit for hours and hours and converse, which was really challenging for me. When I would converse with the people, when I would sit in their huts and at their tables and tell them that I was traveling through the land - rather than helicoptering - to meet the people whose lands I wanted to travel with my customers, they were all incredibly receptive. As a matter of fact, one gentleman – said, ‘This is good talk. This is good talk.’ I won’t ever forget that because it means so much for the Moni to say that.” A "Giving Relationship" goes beyond being empathetic and actively listening. It also means contributing the skills and experiences we have to our partners in order to prepare them for future collaborations. During his recent visit to Papua, Alex led a training seminar for local porters to teach the practices and progressions of a climbing expedition. “I had arranged with our Moni partner for various Moni villages to come together – or the men in those villages to come together – in one place and participate in a seminar where we could teach them how to work with tourists. The training seminar was a raging success. We discussed what was working well in other areas where we operate, like our Peru and our Nepal treks, what wasn’t working well, such as porters being mistreated, which we hear a lot about, and what we might need to change, for example, there is no plan at all for human waste in Papua. We discussed how to keep the porters healthy and safe along the trek and in the mountains, we practiced setting up tents, and we concluded by awarding certificates of accomplishment to the porters who participated in the training so that they could show evidence of learning to whatever tour operator might want to hire them; not just our guides, not just us. “It is difficult to know if this is accurate or not, to be quite honest, but I was told that this was the very first time that a foreigner ever hosted a seminar for indigenous Papuan people; this is the very first time that an indigenous Papuan man was the tour operator rather than an Indonesian or a foreigner. Thirty-five men from varying villages, some were Moni, some were of the Dani tribe, received certificates.” 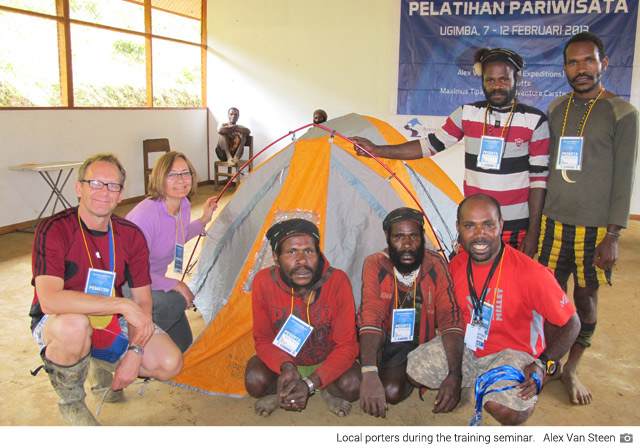 “Giving Relationship” is far more than a simple catch phrase, it’s a long and complicated process but one that we feel is the only legitimate way to pursue a sustainable partnership. “As a biased-toward-action American, I wanted to do more. We all do; we want to do it all. But the truth is that relationship building is an incredibly slow and incredibly lengthy process…I don’t immediately even expect others to replicate the couple of years and all the trips of relationship building that I’ve done there, especially not if you’re only going there for a one or two week adventure and maybe once in your life. But in visiting anywhere even once, we can know so much more about this place than simply, ‘I need rubber boots because there’s a lot of mud!’ We can know a lot more than that. “We believe that this social ethic of “Giving Relationship” does equal access in Papua, not just for the sake of access, but also for the sake of the people and the land there,” explains Alex. In simple terms, this type of relationship building and long term approach to our partnerships and our climbing objectives is the right thing to do. See the full presentation here… _____ Alex Van Steen is a Supervisor at RMI with over 240 ascents of Mt. Rainier by way of more than 20 routes. Since 2012, Alex has led RMI’s effort to create a sustainable tourism industry and developed RMI’s position as the only western commercial guide service to partner with an indigenous Papuan outfitter. He has taken his training and education to Papua and spent time with local community leaders building relationships as well as training and educating porters to work with expeditions. Additionally, Alex has spent more than a decade involving himself in community outreach and education. Locally, he works extensively with at-risk youth as a mentor, pastor, and guardian.