One of the unique aspects of a Denali climb is that it is one of the few big mountain climbs in the world where you can’t hire someone to carry some of your gear. There are no porters, donkeys, yaks, or other pack animals. This means that once the plane drops us off at Kahiltna Base Camp at 7,600’, we have to find a way to move three weeks worth of expedition provisions and our gear up the glacier, and this necessitates each climber pulling a sled.

The use of sleds is unique to Denali and Vinson Massif, and is a component of the expedition that we often overlook when we are preparing. On Denali, we typically use sleds to 11,000’, or for the first 3-4 days. While this is a small component of the expedition, those first few days can leave climbers feeling exhausted and depleted, with the bulk of the climb still to come. Spending some time training with a sled in the lead up to an expedition could help ease this.

On the mountain, we use plastic expedition sleds, not unlike a kid’s sled that you might find at a hardware store, but with a bit more length for added volume and stability. A typical climber has between 40 and 50 pounds in their sled at the outset, and we rig the front of the sled with a trace that clips to a single loop of webbing tied around the climbers backpack, preferably threading through the slot that houses the hip belt, so that the load pulls from low on the pack, about even with the hip belt. This transmits the climber’s pull most efficiently, and keeps the climber in a more efficient alignment, pulling from the center of mass.

To prepare for sleds, try pulling a mock sled during a handful of your endurance workouts (over an hour or so) in the few months leading up to the expedition. Climbing with the sled behind you not only recruits different muscles and requires strength in different areas than climbing without, but requires that we alter some of our movement patterns a bit to remain efficient. The biggest pattern to change is the bread and butter of the mountaineer: the rest step. Efficient movement with a sled involves keeping the sled moving forward steadily. Each time it stops, we have to overcome inertia to get it moving forward again. Therefore, we want to keep our hips moving forward steadily (which is a change from the rest step). We can still get some rest in our legs with each step, by locking out the back leg as we step forward, moving that leg under our hips. Using the resistance of the sled for balance, we can allow our hips to slowly travel over our back leg toward the front, while still maintaining the moment of rest on the back leg. As the hips arrive over the front leg, step up and repeat.

Climbers have found a number of sled type devices to train with; the two most common are a car tire and a plastic sled loaded with some sort of weight (even the kids!). Plastic sleds slide on grass pretty well, while the car tire doesn’t slide as well and tends to add more resistance. Using the mock sled during some of your endurance workouts is most similar to what we’ll experience while climbing, but pulling a sled during an interval workout is also a creative way to add resistance and effort. Happy hauling!

Questions? Comments? Share your thoughts here on the RMI blog! 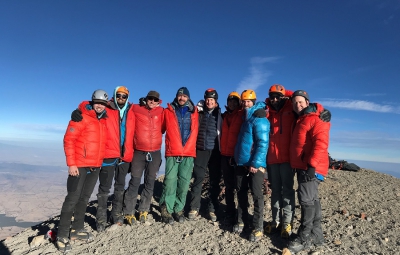 Mexico’s Volcanoes: King & Team Are Safely Down from Orizaba 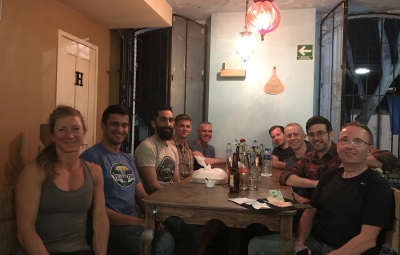