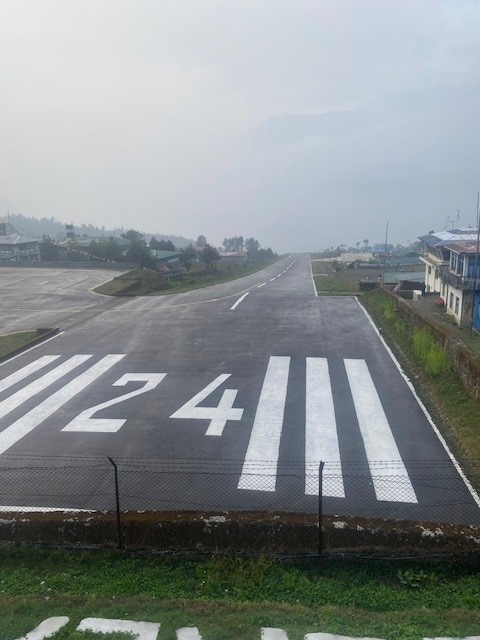 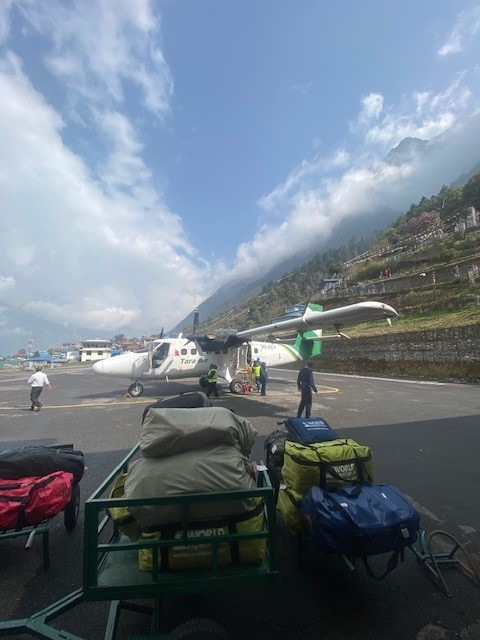 Waking into Namche this round through was much different than the first time.  Despite our sizable group, we were by no means the largest on the trail.

This place is now in full swing with Everest climbers, international trekking teams and yak trains going up the valley towards Everest Base Camp.

Even though the traffic resembled more of a US interstate than a single-track trail, we were pleased to land back at camp de base where we were welcomed with hot showers, Nepal Ice “extra strong beer” and the comforts of nice rooms with personal bathrooms. The hike was roughly 8 miles from Pangboche consisting of many ups and downs but nothing the seasoned team couldn’t handle.

After a normal 7:30 breakfast the following morning, we set our sights on Lukla, home of the infamous dead-end runway and gateway to Everest.   Eleven miles and 6 hours after leaving Namche we strolled in with time to spare before dinner so naps all around became the team activity.   The clouds were thick as pea soup by 7 pm so our flight status was a bit unknown.   With fingers crossed we went to bed. When our alarms ripped us awake at 5 am the disheartening presence of this fog was still lingering out the window.

We made our way anyhow, walking to the airport to check in and hope for the best. After waiting for ten hours to fly on the way in, we were not hoping for a repeat.   Two hours in we were beginning to get a bit worried and then the first plane landed.   Ten minutes later we were loaded up and, in our way, back to Kathmandu!

Now we are clean, fed and content, celebrating a fun and successful trip. I can’t thank this team enough for a great few weeks in Nepal.

This wraps up the Everest Base Camp and Lobuche expedition. Thanks for following!

Amazing trip. Would do it all over again. This trip changed the trajectory of my life. Thank you for your expertise guidance and comeraderie

Congratulations! If you are in southwest Idaho, look us up!

It was Awesome following along Hannah and Adam! Great job and congratulations!
Farmer Dave

Congrats on a successful trek and safe travels to Bozeman and other points.