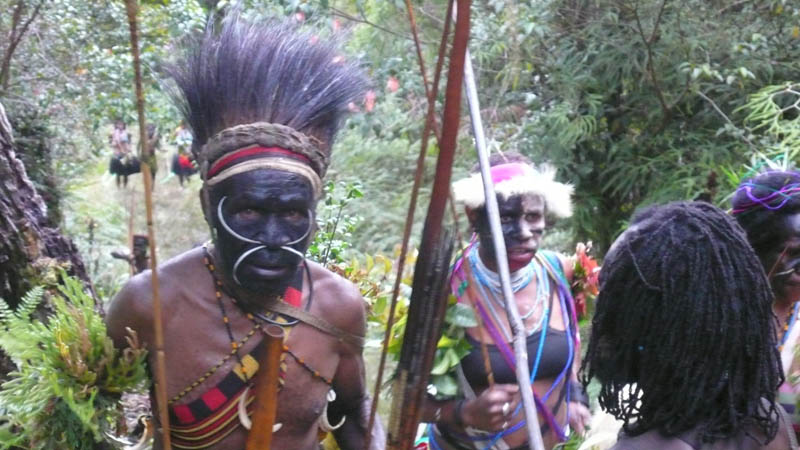 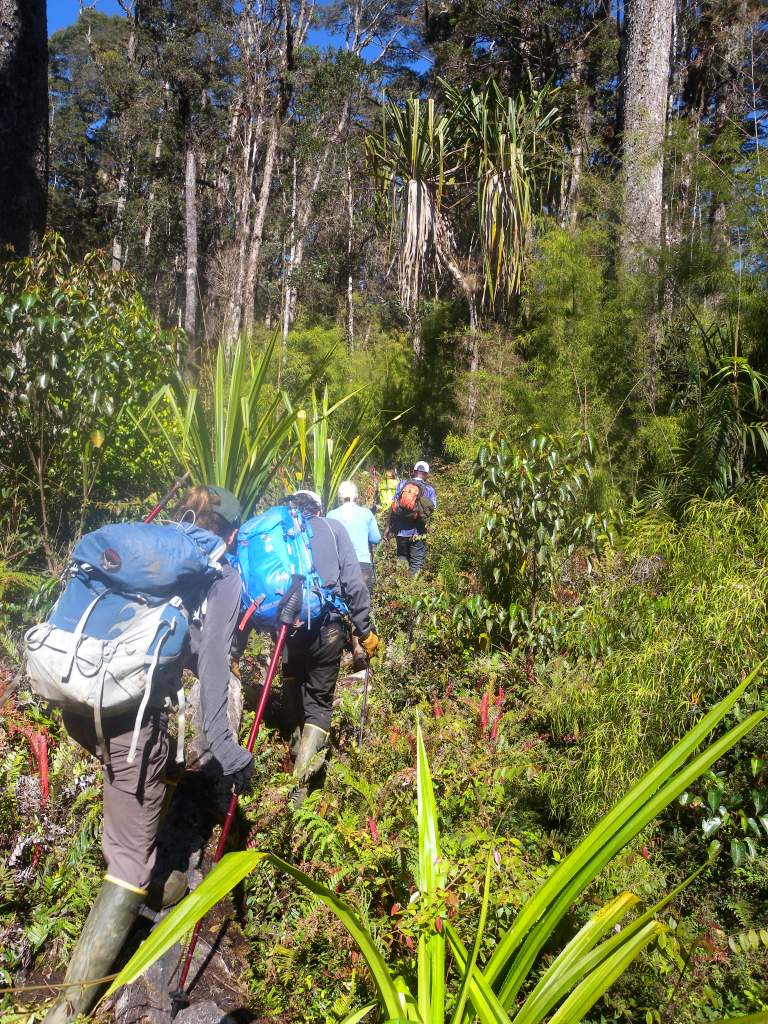 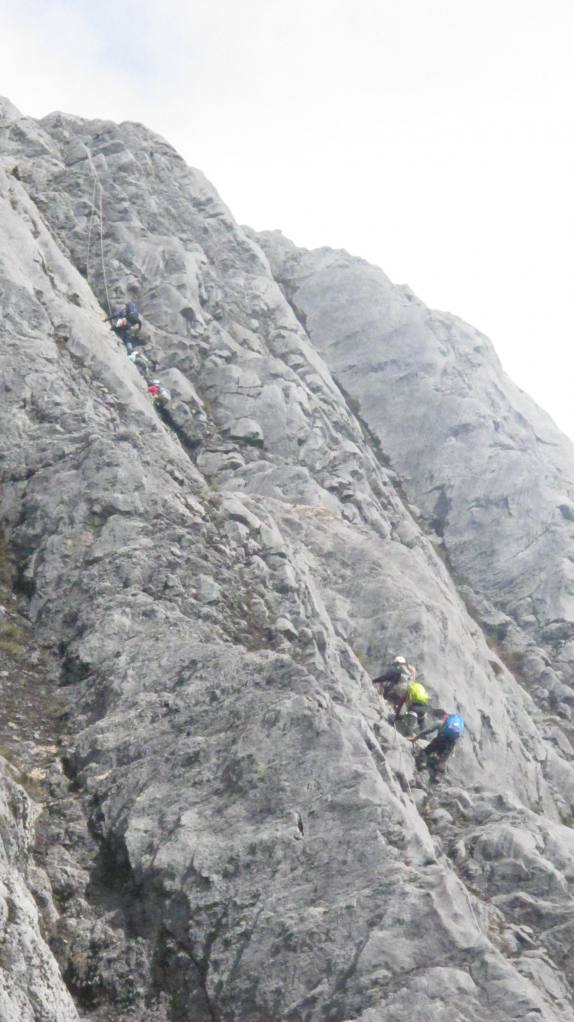 As we descended the path leading to the Moni tribal village Ugimba, two men - wearing only traditional kotekas (penis gourds) and tribal markings and wielding large bow and arrow sets - stepped out of the bush and onto the path, raising their weapons toward us as they did so. Our hearts stopped, but just for a breath. A moment later two pairs of young women also stepped into our path. Equally modestly dressed in grass skirts and colorful jog bras – I guess that’s what I should call their tops – also with a variety of facial paintings and tribal markings, the women began a series of repetitive calls that sounded very much like an old style emergency alert siren. The sound that issued from them rang amazingly loud and clear and others, further toward the village, responded in kind, setting up a sort of path of sonic bread crumbs for us to follow. We were being treated to an entirely genuine and traditional village welcome ceremony, complete with dance and song. The welcome committee, now growing rapidly as additional warriors, women and children joined in, guided us patiently toward Ugimba. Running ahead about fifty feet, then stopping to dance as we caught up, and all the while calling out, the six of us were soon engulfed in a small sea of Moni tribes-peoples. In the distance, even from entirely across the valley and opening meadows, we could see all eyes on us. I asked Sara, one of the two teens on our trip - and a stalwart kid at that! - if she would like to lead. I was afraid that perhaps she was not able to see some of the traditional welcome ceremony as I was walking in front and blocking her view. I wanted for her to experience this as fully as possible since this was by far a most unexpected and exceptional experience. She responded, a bit reservedly, “Oh, I’m experiencing this!” And we were. What a fantastic climax to our day of trekking through the heat, humidity and wetness of the jungle. We knew we had a lot to look forward to on this trip as we were engaged on an excellent adventure via a route that has seen few western travelers, with a two-fold goal: first, safely reach and return from the summit of Carstensz Pyramid and second, build relationships with indigenous people which would respectfully balance our visit with their way of life. This excursion represented our inaugural effort and we were full of hope that we might attain our goals. The village of Ugimba lies in the heart of Moni land in Papua, deep in the jungles of New Guinea. It is the deepest of the tribal villages; only immensely dense jungle and the high marshes and limestone plateau’s of the Sudirman mountain range lie further afield. We would travel this road less traveled en route to Carstensz Pyramid, the jutting high point of the Australasian continental mass (or the high point of Oceania as some call it.) Six days of arduous trekking eventually led us to our Carstensz Base Camp at 13,900 feet alongside a pair of sky blue alpine lakes known as the Peacock Pools. Rising all around and above camp, amazing rock ridges and towers fought for our attention. If this were the U.S. Rockies or Cascades, the place would be inundated with routes. Here, however, only the most significant line of weakness on the highest peak – the original route – remained the solitary choice for climbers. (Sadly, we knew others had travelled here as plenty of garbage had been left strewn about Base Camp. We have since begun an initiative to help clean this beautiful area, and look forward to working cooperatively with locals and visiting climbers in the future.) The climbing of Carstensz Pyramid is rather spectacular, with rock that just won’t let you go, even when it runs with rain water (and it rains every day.) The route initially climbs a series of 4th and low 5th class rock gullies before traversing along the narrow summit ridge and over several small notches, toward the summit. The climbing involves mostly scrambling, with dramatic exposure and a few short sections of mid 5th class climbing. Fixed lines and a Tyrolean traverse bypass many of the difficulties. Even with rain, fog and a bit of snowfall, and the altitude, it remains an imminently do-able adventure. After a long day of effort, two of us - including 17-year old Sara - reached the summit, and all of us returned tired but unscathed. Still some distance from the summit, with the lateness of hour and deteriorating weather on our shoulders, Tuck and I, as guides, made the choice to split the team: Sara and I headed for the summit, with the expectation that we would catch the remainder of the team just before the Tyrolean, and rejoin to complete the descent. Even with more than two hundred high altitude peaks between the two of us, guiding thousands of climbers on hundreds and hundreds of climbs, decisions like this remind us that professional mountain guiding is a most serious profession. Sara’s dad, Bill (who climbed phenomenally well), and I plan to return to Ugimba in the following six months to help the Ugimba Moni explore options for healthy community development. Bill and I were both strongly and positively impacted by the Ugimba people who helped make this adventure a reality for our team. As we continue to support the development of local enterprise and promote the rights of indigenous peoples both to develop tourism and maintain their traditional lifestyles and customs, we invite you to follow us. I will be posting monthly at http://climbcarstensz.wordpress.com. RMI Guide Alex Van Steen

I have seen the above comments that others has given and read the comments that describes about Carstensz Pyramid Expedition. I congrats you for proving the such a wonderful information.