I climbed Mt. Rainier with my father last summer. After a memorable summit, my dad - a man of little words - expressed his confidence in my abilities as a mountain guide, a compliment I did not take lightly. He told me that he trusted my decision-making in the mountains and wanted me to be a part of his dream trip: combining his passion for the water and the mountains with a sailing and skiing trip in the Lofoten Islands of Norway. I immediately approached fellow RMI Guide and good friend Pete Van Deventer to see if he was interested in joining the crew. Without hesitation Pete and his wife committed to the trip. Besides being a great climbing partner, Pete had spent time in Norway in college and was eager to return. Additionally, he suggested that we invite one of his Norwegian friends to accompany us. Magnus had already completed a similar trip and was able to offer great suggestions about boat charters and finding a competent captain for our voyage. The dream trip was starting to take shape. After months of training and preparation, we headed to Norway in April. My dad and I flew to Oslo where we spent two days sightseeing before flying above the Arctic Circle to a fishing village on the west coast to meet our team. A few hours after arriving in Svolvaer, we heard ski bags rolling on pavement. Pete, Katie, Magnus and Maria, Magnus' girlfriend, arrived at the boat and our seven-day adventure began! 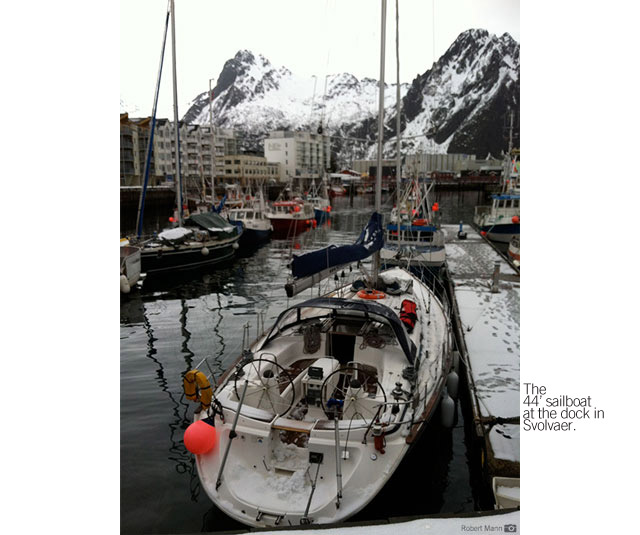 The next morning we woke up to partly cloudy skies and the realization that a 44-foot sailboat is a tight space for ski gear, sailing gear, and eight people. After organizing our gear in waves, we left the boat with skis on our packs and walked toward a favorite local ski touring peak. Successfully navigating the Svolvaer neighborhoods, we finally reached snow. With climbing skins on our skis we began our ascent up the south side of a peak named Blåtind. Partway up the mountain, it began to rain and visibility dwindled. Too excited to turn back on our first day of ski touring, we decided to continue. A few minutes after reaching the saddle on Blåtind the sun came out and we focused our attention on a ski line on east side of the peak. The conditions were spring corn snow. After a close to 2,000’ descent we put our skins back on and toured along the water to the nearest road where we hailed a taxi back to the sailboat. The following morning we set sail to the Trollfjord. The Trollfjord is an area accessible to skiers only by boat. With our sails up and Katie Van Deventer at the helm, we sailed to the entrance of the Trollfjord - a dauntingly narrow waterway surrounded by steep walls. We docked amid howling winds and a mix of rain and snow. Reaching the TrollfjordHyatta, a cabin in the Norweigan Hut System, would have to wait until the next day. We woke to improved weather and loaded our ski gear and a night’s worth of food onto the dock. The boat sailed away promising to return the following afternoon and we spent the morning skinning to the TrollfjordHyatta. The hut turned out to be a small majestic wooden cabin surrounded by peaks in every direction. Inspired by the mountains around us, we headed out to ski Peak 975. We had great views of our climb ahead and discussed our route and ski options. After an hour the terrain became too steep to skin. With skis on our packs, and clouds rolling in, we reached the top of Peak 975. Since the light was flat we used our bootpack to guide us as we skied down the same route we ascended. The visibility improved and we were reminded of the natural beauty of the Trollfjord. Taking advantage of the good weather we added a few laps to finish our day on a smaller peak just above the cabin. From there we could see the dramatic entrance to the Trollfjord and the unlimited ski options for the following day. The night in the hut was filled with wine, laughs, and Ludo, a Norweigan board game. In the morning we were able to get a few runs in on some steep north facing chutes before returning to dock where we met the boat. 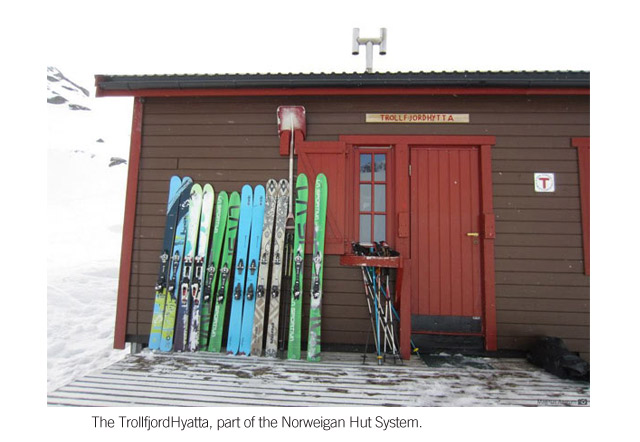 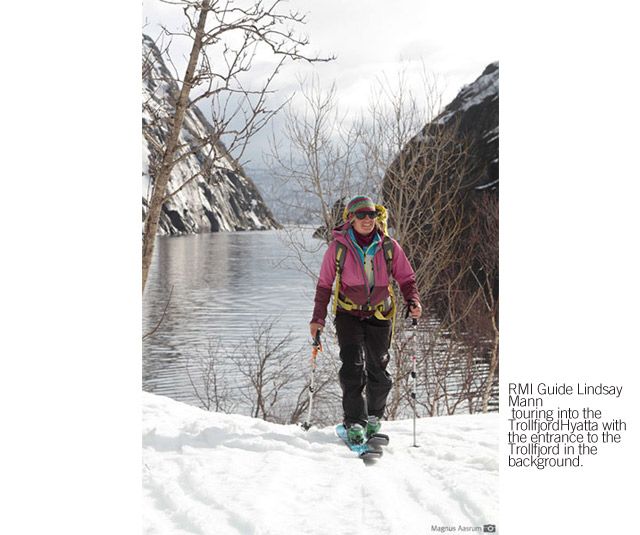 As we sailed away, inspired by the endless quantity of peaks around us, we discussed the multitude of ski options for the day and remainder of the trip. The next few days were unlike any trip I have known. The terrain and sailboat allowed for ultimate flexibility. If the weather was good, we would ski; if the weather was marginal, we would set sail waiting for the conditions to change. Once we decided upon a peak the question then became: how do we get to shore? This was often time and energy consuming. We would either dock the boat or, if that wasn’t an option, we would get ashore via dinghy. If we went by dinghy Frederik, our captain, shuttled us and our gear ashore while Iselin, the assistant captain, handled the sailboat. From the dock or shore we would skin or walk a few miles to a skiable peak, climb and ski it, and make our way back to the boat. This sometimes meant walking, other times we were able to ski within a few hundred meters of the boat. Other times it meant taking a cab to where the boat was docked. Each day was a new adventure with a new set of options. 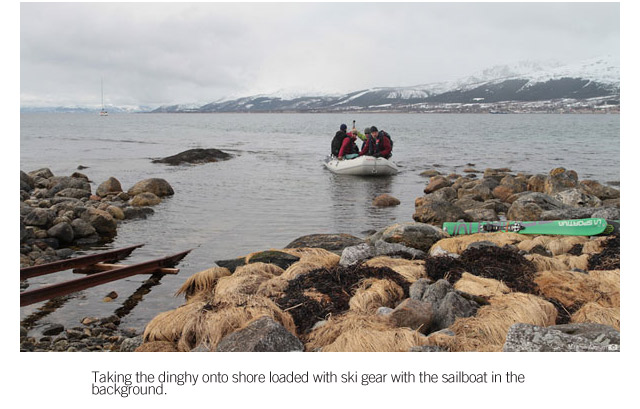 As the days passed, the weather improved and we finally had the perfect Norweigan ski descent on the last day of the trip. For the first time during our adventure we woke up to bluebird skies and decided to ski a peak called Storgalten. Upon reaching the top of the peak could see mountains, water, and our sailboat. Thrilled with the descent, Pete, Katie and Magnus celebrated it with a plunge into the fjord. We then set sail back to Harstad, our final destination, with Storgalten still in view. Weeks later, I’m still amazed by the diversity and accessibility of the terrain found in the Lofoten Islands. I have been lucky enough to ski and climb in mountains all over this world and this trip was truly unique. What made it all the more special to me was being able to share it with my father and a group of close friends that got along seamlessly on a 44-foot sailboat for seven days. 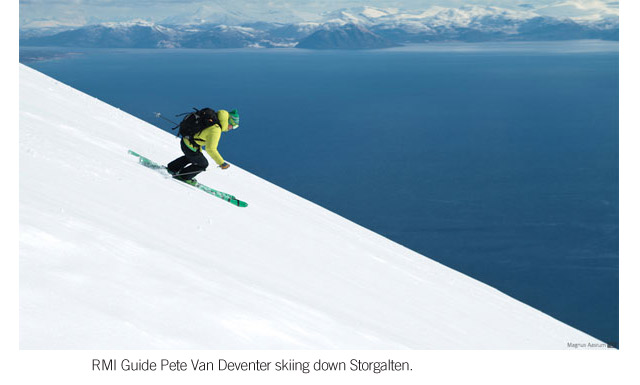 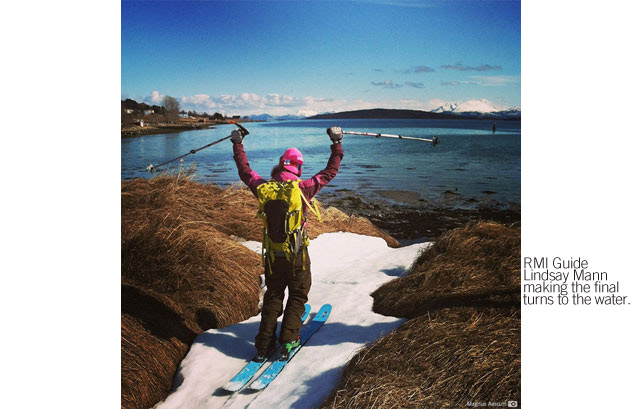 Looks awesome!!  Such I tough life you guys have!!