Every summer, RMI climbing teams consume over 7,000 gallons of drinking water at Camp Muir, the primary camp on Mt. Rainier's Disappointment Cleaver Route. For many years, melting snow in a large barrel heated by propane created drinking water for Camp Muir. We knew that there was a better way to provide drinking water to our teams and it just required a little bit of creativity, brainstorming, and initiative. Over the course of the 2012 and 2013 climbing seasons, a new solar thermal system was installed at Camp Muir. This system, designed to use environmentally benign and free solar energy to efficiently melt snow, provides drinking and cooking water for RMI climbers and guides at an elevation of 10,060'. The system was designed and built by RMI Guide and alternative energy professor Mike Uchal and his colleague Dr. Brian Raichle, who is a professor of solar energy technology at Appalachian State University. RMI Guide Cody Doolan also contributed with the design, installation, and maintenance. RMI's Solar Snow Melt System, part of our commitment to Responsible Climbing, reduces our environmental footprint on Mt. Rainier by minimizing the need to burn liquid propane gas in order to melt snow, cuts our operating costs, and reduces the environmental footprint of the helicopter used to transport propane to Camp Muir. 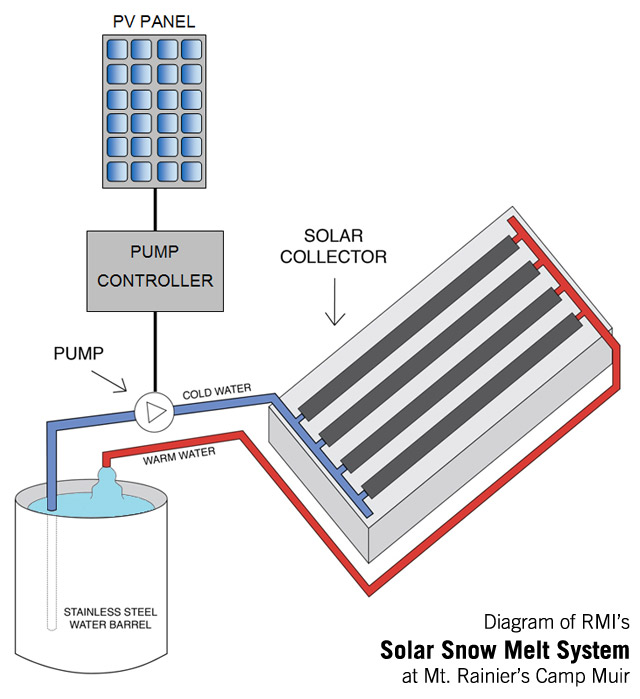 How it works: A small electric pump powered by photovoltaic panels pulls water from the burn barrel, a large barrel used to melt snow, uphill to a solar thermal collector. The collector, a conventional flat plate solar thermal collector is the kind that is typically used in residential and commercial domestic hot water systems. The water is pulled by gravity through the copper pipes in the collector and is heated by solar radiation before returning to the melt barrel. RMI guides keep the barrel fed with clean snow from the snowfields above Camp Muir and this snow mixes with the warm water and melts into liquid form. A controller turns on the pump in the morning and off at the end of the day when the sun goes down. Because the collector is uphill of the barrel, gravity drains water from the collector at night to prevent damage from freezing water. This system design eliminates any problems associated with overheating during late season conditions when solar energy can be plentiful and strong. 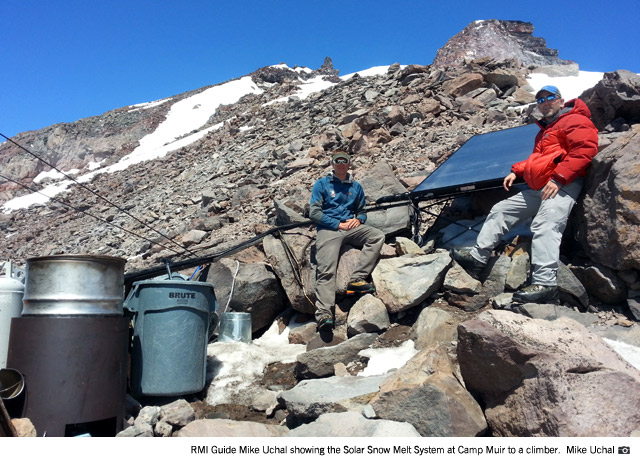 How it performs: On warm, sunny days at Camp Muir, typical in the late summer, the solar snow melting system heated the 30+ gallons of water in the burn barrel to above 100°F. That is nearly spa temperature! On cold, sunny days, often found early in the season, the system heated water to temperatures above 40°F - enough to effectively melt snow. Propane is still used during storms that last several days, when solar radiation isn’t strong enough to heat the collector, but the solar snow melting system dramatically reduced the amount of propane burned during the 2013 summer climbing season. 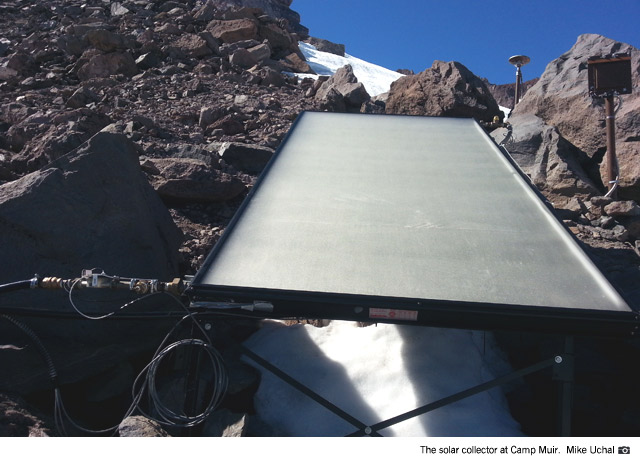 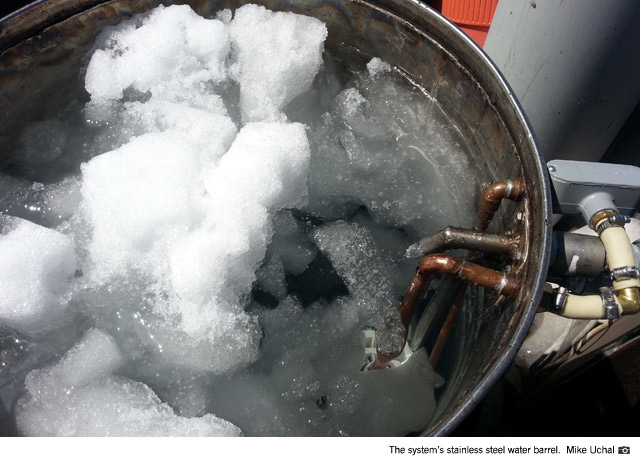 Anecdotally, before the 2013 climbing season the propane burner was running for around 3.5 hours per day to melt enough snow to provide drinking water for the RMI teams. During the 2013 climbing season, guides estimate that the burner was needed on average around 15 minutes per day. During the summer climbing season of 2013, we estimate the solar system saved approximately 250 pounds of propane, the associated cost of transport that propane, and 0.33 metric tons of CO2 emissions. This project is part of RMI’s commitment to the outdoor community and environment as we work to reduce the environmental footprint of our climbs in order to ensure that many future generations are able to enjoy the same mountain environment that we enjoy. The RMI Solar Snow Melt System is a great example of practices that can reduce a business' environmental footprint and provide cost savings at the same time. By the end of its first full year at Camp Muir, the system paid for itself with savings in fuel and helicopter transport costs. The next time you make it to Camp Muir, swing by the guide shack and check it out! The guides would love to show you the system in person. _________ Mike Uchal is a Professor of Alternative Energy at Appalachian State University and guides trips on Mt. Rainier and Mt. McKinley for RMI Expeditions. Mike lives the mountain life, rock climbing, paddling whitewater, mountain biking, trail running, and skiing whenever he has spare time.

Thanks for sharing such an amazing informations.
Very helpful.

Hello folks looking for the skills seminar this week. There was a posting yesterday but not under Rainier. The above link will take you to a great picture!

Hello Father/Uncle!!! Thanks for the Update! Glad to hear they made it and are back at Muir!

So glad to hear that summit was accomplished and the group is back at Camp Muir.  Congratulations!

Hello Georgia, Our son is on the same trip and we just heard (1300PDT) they made the summit and are back at Muir!

Any information on the group that started out Monday and expected to reach the Summit tomorrow on Mt. Rainier? Any information is greatly appreciated! Are they on track? Is everyone okay? Thanks! Family in Georgia 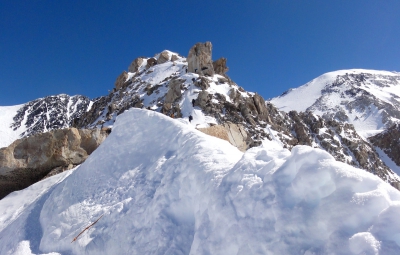 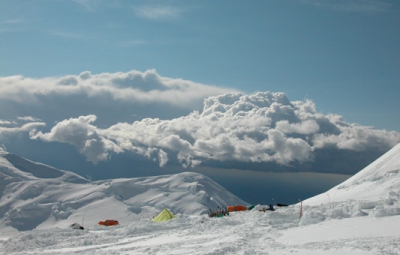