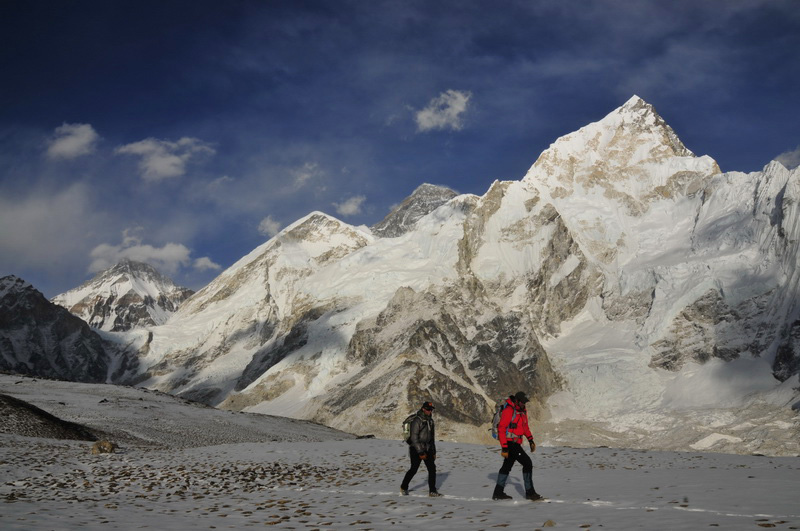 We've come to the inescapable conclusion that Everest summit for 2015 is out of reach for our team. Besides the rather obvious and glaring philosophical difficulties of pursuing a recreational venture in the midst of a national -and local- disaster, there are the on-the-ground mountaineering realities that will not permit us to look upward again. We have no viable route through the Khumbu Icefall and the Earth is still shaking. We couldn't think of asking anyone to put themselves at the risk required for re establishing that route under such circumstances. The effort at this advanced stage of the season would normally be focused on building a route to Camp 4 rather than to Camp 1, nobody will be able to say when the aftershocks will end, but it will -without a doubt- be too late for fixing the upper mountain and stocking camps before the normal advance of the monsoon. We'll put our efforts into an organized and safe retreat from the mountain. Nobody harbors illusions that travel in this stricken and damaged country will be simple, but we'll head for home now in any case. Best Regards, RMI Guide Dave Hahn

Your shining example amid tragedy for the second time in 24 months make me proud to have been associated with RMI…You help all understand how to be w-i-t-h the mtn as well as o-n it, and more importantly to be with others, inhabitants as well as climbers.
Best + God bless JJ and team. Waltero

Safe thoughts for the unsure journey ahead.

Glad to hear that you are all alright.  May God guide you safely home.  Our prayers are with you all.  One of my friends was on a Trek to base camp when the quake hit he was with a team of medical professionals and they are helping out on their way back to Lukla.

My prayers to all of you for s safe return home.  Thanks you for your writing in the middle of all of this.  Any word on Larry Seaton?

Thank you for your ongoing commitment to sharing the teams experiences. Your straight forward commentary has been both exciting- at the start- and reassuring as we sat on pins and needles waiting for any word from Everest. I look forward to reading about the teams journey down the mountian. Safe Home!!

Grateful that everyone on the team is still alive, and praying for the loved ones of those who were less fortunate. Summiting is not the end-all. Proud of this team regardless of summit “success.” I wish you all a safe journey home.

Dave and team: great perspective on things and sending good vibes from Seattle. Hope you all have a safe trip back and will send support to those suffering in Nepal. Hope to cross paths soon.

Dave and team. So glad u r all ok despite disaster. Dave,  please stop by if you ever pass thru Ouray and let me repay your kindness during our Taos/Telluride exchange. We have you all in mind hearts and prayers. Michael, Telluride Ski Patrol

Your decision is obvious and courageous.  I can’t imagine the emotions you all are feeling…shock, disbelief, sorrow, disappointment…we who are not there are feeling all these things for you.  And we are all thankful that you have survived.

we are so glad that you all are doing good, and pray for your safe return to your respective families.

I’m so glad you are all safe. But so sad at the devastation that surrounds you. I feel for all the Sherpa’s whose lively hood depend on the ascents. I hope the people can be helped.

My favorite from the quotes of the day:  “Be safe to climb another day”.  See you soon. xoxo

Praying for all of you for a safe and quick return home. Remember there are alot of us here in the States sending good wishes your way.

Was anyone from any team higher than camp two and what is their status?  Had anyone summited or come close this season?

Ai man it is such a pity that a lifetime experience comes to an end this way. I was enjoying your blog and read up on all the stages you went through. All the preparation physically and mentally. The team must be in an emotional roller-coaster.

I pray a safe journey for you back to your loved ones.

Dave, JJ, Peter and team - wishing you safe travels home through a very fragile country. It’s difficult to fathom the destruction.  Not an unexpected decision, but I’m sure that there are mixed emotions to go along with it.  Be safe to climb another day!

Is there going to be a relief fund offered directly through RMI, or through Red Cross?

My thought and prayers are with the whole Rmi group…. Dave & JJ will get you home safe

Dave,  thanks for sharing and grounding us all in the true priorities in life.  I’ve enjoyed following and wish you all safe travels home.  My family will help and contribute to Nepal from a distance.

I wish you all strength in the journey down. I’ve been providing these beautifully written, thoughtful, personal and informative reports on Facebook with my friends and they all share their sadness of the impact of the earthquake on your team, others on Everest, and the Nepalese. Can’t want to see Peter in the USA!

Glad everyone was alright in the face of Tragedy. If I had to be trapped on a mountain at altitude there is absolutely no one I would rather have watching my Back then Mark Tucker. No surprise there.

Thank you for your update.  We cant imagine the trauma that all those involved are going through but can only wish you all safe travels and a healthy recovery to everyone.

See you all soon.

Our thoughts are with our team, the people of Nepal, and all those affected by this tragedy