50 Years of Climbing: Lance and Annette Berg and Mt. Rainier

2010: On the Summit of Pico de Orizaba, Mexico. Lance is holding the RMI flag. ---- In honor of our 50th Anniversary, we are featuring stories of first climbs. Stories from guides and stories from climbers. Today we are excited to share Annette Berg’s story of her late husband, Lance’s first climb of Mt. Rainier. Annette will be climbing Mt. Rainier on a Five Day Climb later this month in honor of her 25th wedding anniversary and in memory of her husband, Lance. Find out more about having your first climb featured on our blog! ---- When we were married in 1994, RMI was 25 years old. This year would have been our 25th wedding anniversary, but unfortunately my husband, Lance, passed away three years ago. So it seems befitting, with RMI’s 50th and my 25th anniversary, to share our story – mostly Lance’s climbing journey, which played a huge part in our life. It all started with a hike up Green Mountain in the Glacier Peak Wilderness of Washington State in August of 2000. Family members wanted us to hike this mountain. Our shoes were all wrong, the packs were terrible, and we did not have enough water. In the days following this monumental first hike, both of us opted to crawl up the stairs in our house. The soreness was ridiculous and lasted for days. Once we recovered from Green Mountain, we decided we actually enjoyed the pain and suffering. So we bought proper hiking gear and started hiking regularly. It got a lot easier with time. 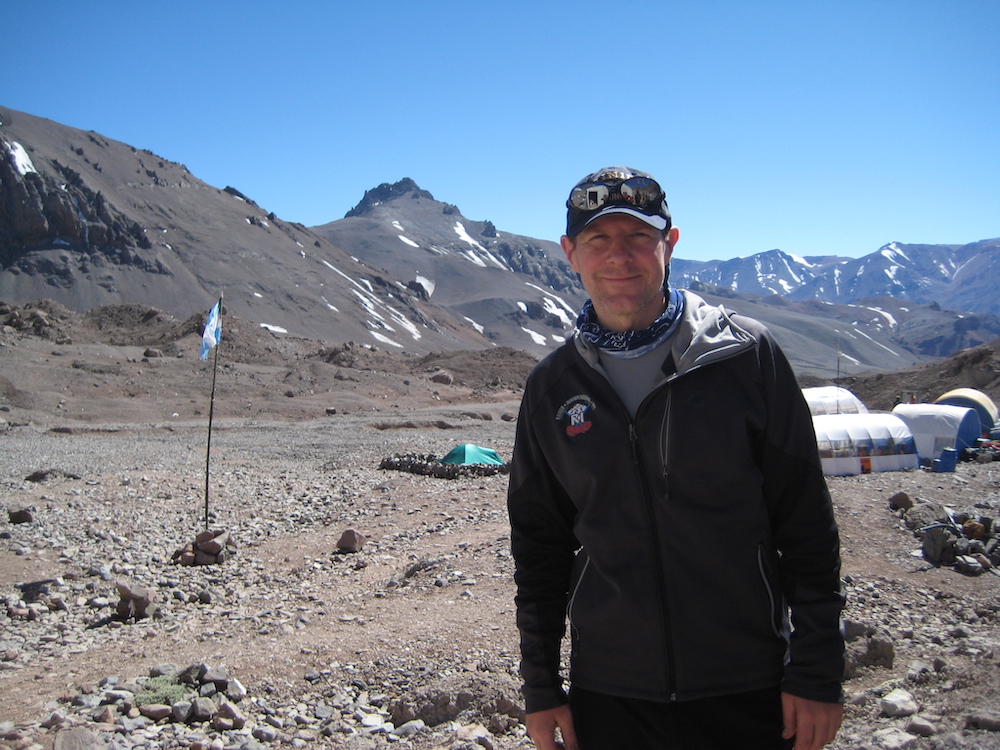 2010: Lance at Plaza Argentina, BaseCamp on Aconcagua. One afternoon in 2001, we found ourselves on the Skyline Trail of Mt. Rainier. On that afternoon everything changed. We ran into groups of descending climbers. This was new! We both knew nothing of the climbing world and we both were instantly fascinated by them. Somehow they were like mythical creatures. They looked cool and had the coolest stuff attached to their big backpacks: ice axes, crampons, helmets, ropes. They had seen places that truly not a lot of people get to see. Earthly folks on the Skyline Trail made way to let them pass. It was impressive. Suddenly hiking took on a whole new dimension. It was still just hiking, but we started to educate ourselves about Mt. Rainier, Mt. Everest, mountaineering equipment, Camp Muir, Ed Viesturs, etc. We figured out that RMI existed in Ashford. We attended the first Rainier Mountain Festival that RMI had (even before there was the Bar and Grill). Ed Viesturs was there and we had our picture taken with him. He was our new idol. 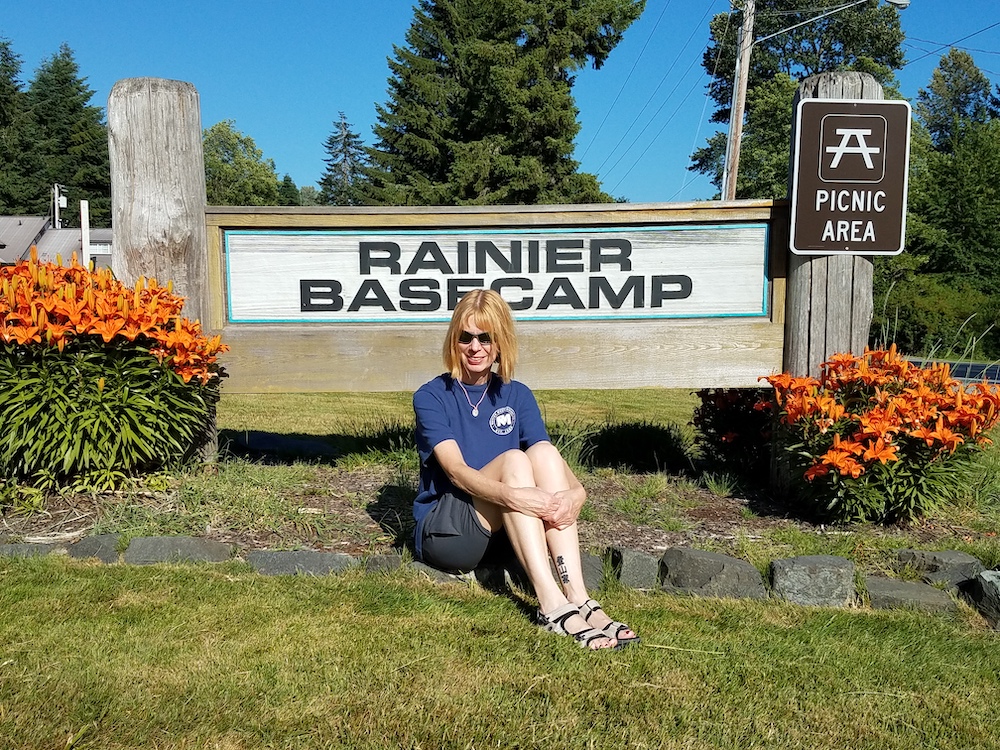 Annette Berg at Rainier BaseCamp in Ashford, WA. All along we heard stories about the Muir Snowfield. We heard about the dangers of it. In our minds, only those mythical creatures could walk up the Snowfield to get to Camp Muir. One day, we hiked up to Pebble Creek and dared to walk onto the Muir Snowfield. We probably went up about a quarter of a mile and then, for no apparent reason, became freaked out by our own boldness and returned promptly to Pebble Creek. We did however, feel quite accomplished with our quarter mile venture. Throughout the years, the hiking continued. The mountaineering knowledge increased. We actually dared to go to Camp Muir many times, sometimes a few times a week. We still admired all the mythical creatures that were at Camp Muir ready to climb the Mountain. Then in 2008, Lance decided he would climb Mt. Rainier and become one of those mythical creatures. He went all in and signed up for a climb with Ed Viesturs and Peter Whittaker in August 2008. I guess I was his base camp manager. I helped him with all the packing, repacking, and food selection. We combed through the agenda and checklists for hours to make sure he had everything. It was exhilarating. 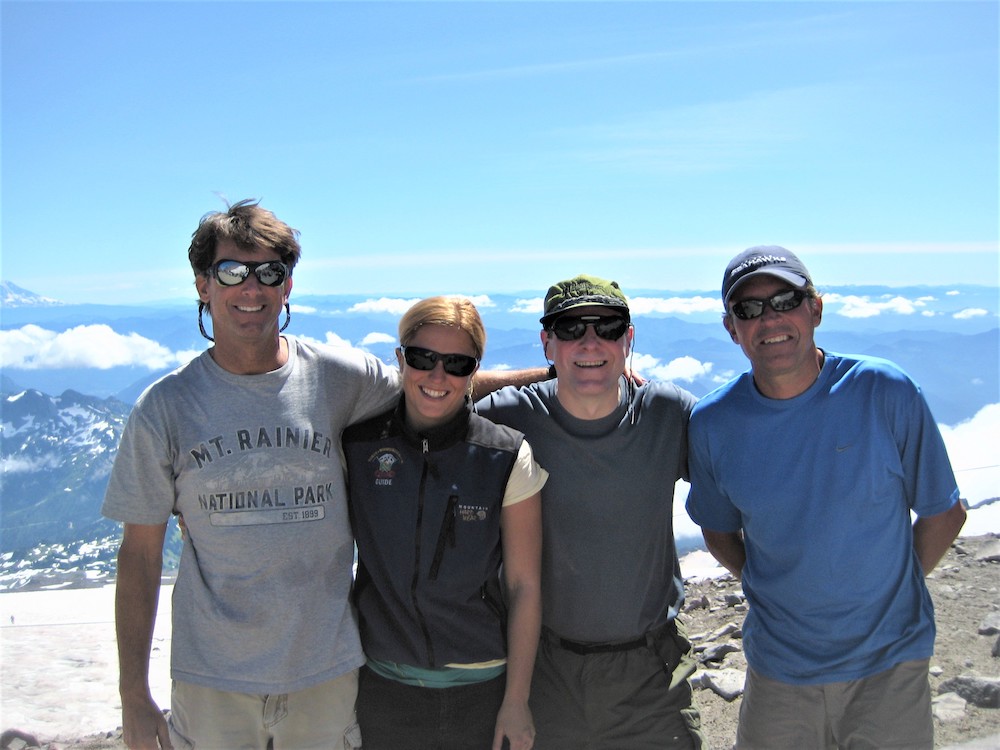 2008: Mt. Rainier. From L to R: Peter Whittaker, Melissa Arnot Reid, Lance Berg, and Ed Viesturs. On a hot and sunny morning, when the Viesturs/Whittaker team went up to Camp Muir, I was at Pebble Creek taking pictures like paparazzi as they passed by. I wished them luck and waived them off. By the time I returned to Paradise, it was noisy and very busy. I had binoculars and from the parking lot I could see the upper end of the Muir Snowfield. I think that was the moment I fell in love with the Mountain. I saw the groups of climbers, like centipedes, silent and graceful, above all the commotion of Paradise. Up there the centipedes seem to be one with nature and worshipping the Mountain. I was convinced that the tourists down below had no clue about what goes on up there. Lance made his first summit. Then mountaineering became a passion. He loved climbing with RMI. He loved the adventure and the social aspect. He preferred to climb with RMI rather than privately because he knew a lot of the guides. If a jacket, shirt, or hat had the RMI logo on it, he had to buy it. If I wanted to be seen in his company, I had to have items with the RMI logo. I was part of all his training and planning. Heck, I have seen so many orientations at RMI, I could give that presentation. Every summer, RMI BaseCamp in Ashford was our happy place. We would drive the two and a half hours to Mt. Rainier many times for a day of hiking, or to go up to Camp Muir, and then returned to RMI for food and beer. We attended many more Mountain Festivals. 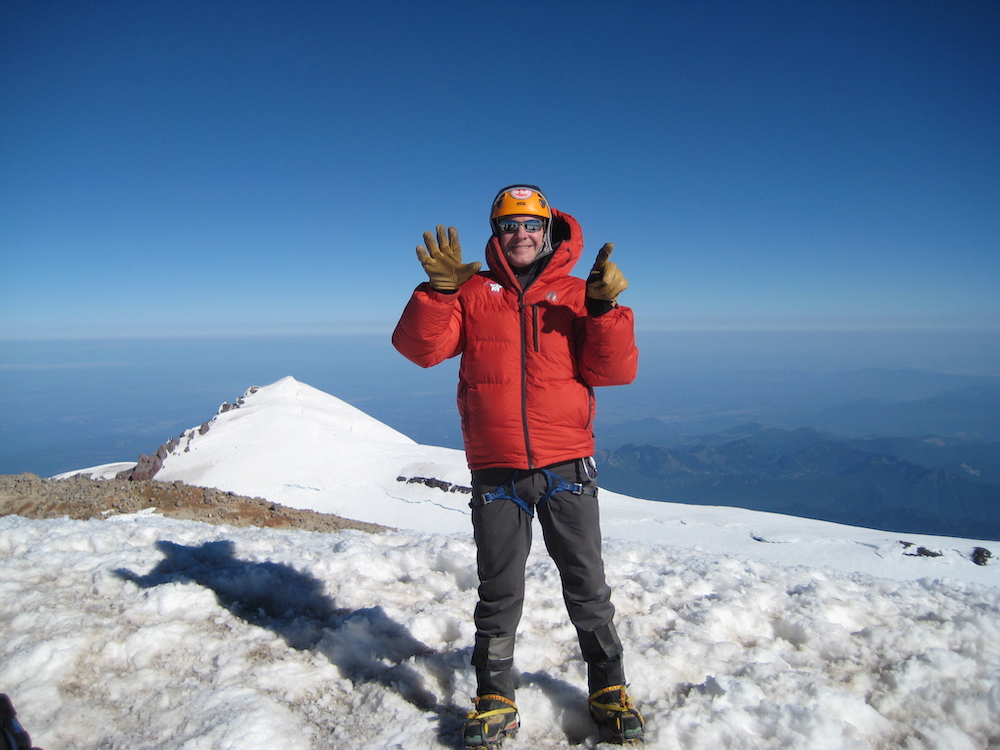 2012: Lance celebrates his 6th summit of Mt. Rainier. This summit was via the Emmons Route. Lance ended up climbing Mt Rainier seven times with RMI. One of the climbs was the Emmons route. Every time he came down, I was waiting for him at BaseCamp with a beer ready and sandals so he could free his feet from his climbing boots. One day, there were even a few of the Seattle Seahawks Cheerleaders at BaseCamp, but that’s a different story entirely. Lance’s other RMI climbs included Mt. Shuksan, Cotopaxi and Cayambe in Ecuador, Ixtaccihuatl and Pico de Orizaba in Mexico, and Aconcagua in Argentina. 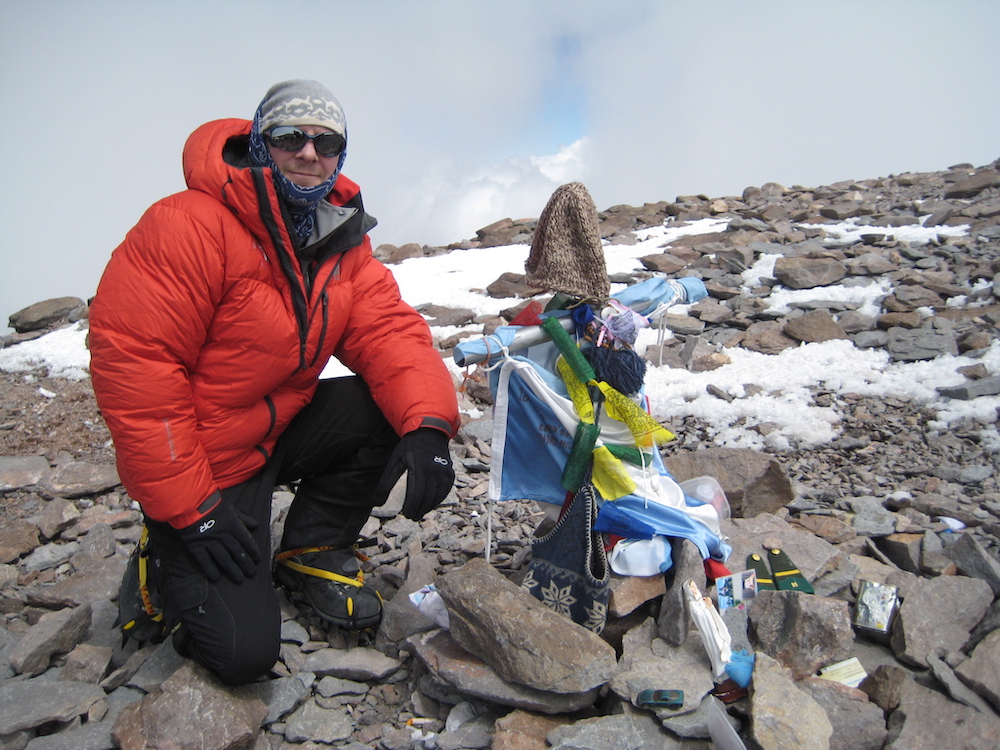 2010: Lance on the summit of Aconcagua. Just to make it clear, Lance’s death in 2016 was not due to mountaineering. Since then, I have continued to return to Mt. Rainier and RMI BaseCamp in the summers to hike. Sometimes I’m alone, sometimes with family or friends. The Mountain will always be one of the most amazing places I have been to and it holds a special place in my heart. This year with our 25th wedding anniversary, my plan is to summit Mt. Rainier in Lance’s memory. I want to take Lance’s picture to the summit. The Mountain has brought him and me so much happiness. I need to stand on top so I can feel closer to the mythical creature my husband has become. Annette Berg

I loved reading this touching article you wrote Annette and seeing the pictures as well. I’m glad that climbing Mt Rainier gave both you and my brother Lance much happiness and still continues to give you many good memories. You are a strong woman and are amazing to climb Mt Rainier so many times!  I will always remember hiking lower Mt Rainier with you and our family in memory of Lance. Memories of Lance and that hike will stay in my heart forever ❤

I love that Lance’s passion for the mountain and climbing lives on through you Annette. We will be at up at Camp Muir cheering you on and are looking forward to celebrating with you afterwards!