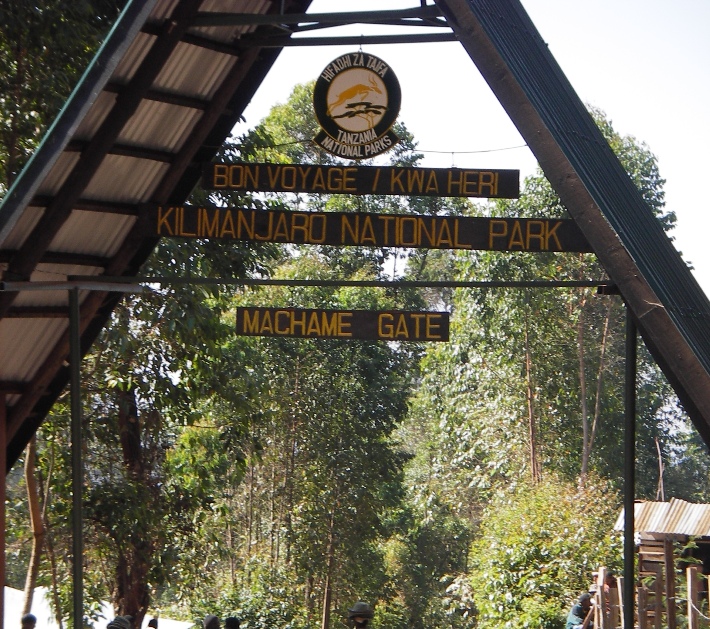 Kudos to the team! The group climbed quite well on this first day of our Kilimanjaro Expedition. The 4,000' of ascent was accomplished with relative ease, and now we're enjoying an afternoon that has become warm and sunny. Our day began with an early breakfast and quick departure for the Machame Gate, where a heavy drizzle kept us company while we waited for our porters to organize our gear for transport uphill. Rain should not be unexpected in a rainforest, but nobody likes starting their day in the wet. Luckily, by the time we started the rain had mostly abated and we were able to shed that Gore tax layer fairly soon after we started. At camp our mountain staff worked tirelessly getting tents set up and cooking arrangements working. The magic happened quickly and camp life began for us. As always, dinner was superb, starting with a savory zucchini soup and followed by pan fried steak, potatoes, rice and a cardoman/ coriander vegetable dish. Though we thought the nutella banana fritters were dessert enough, a special cake was brought in, lit up with candles, for Patti's birthday celebration. What a party it was as we were regaled with song and dance in honor of our birthday girl. Such a special night! A chill is in the air as we prepare for tomorrow's climb to Shira Camp. All for now, RMI Guide Brent Okita

Go Team! Keep on trekking. Mary so proud of you, you are may champion, my hero!  Can’t wait to have you in my arms!

I can’t wait for that bright, bright Mary light to shine from the top of that peak.  Light up the world my Soul Sister!  Sending much love!

We are cheering you on Mary and team.  Inspiring people all across the world, thank you.  Having courage, strength, tenacity, grit and determination to face your fear.  Love you so BIG!  Be safe and enjoy the journey!

You are a bad ass with a purpose Mary! Inspiring me and so many others. We are with you in spirit on this mission for all. Sending my love & strength. May you be blessed on this journey.