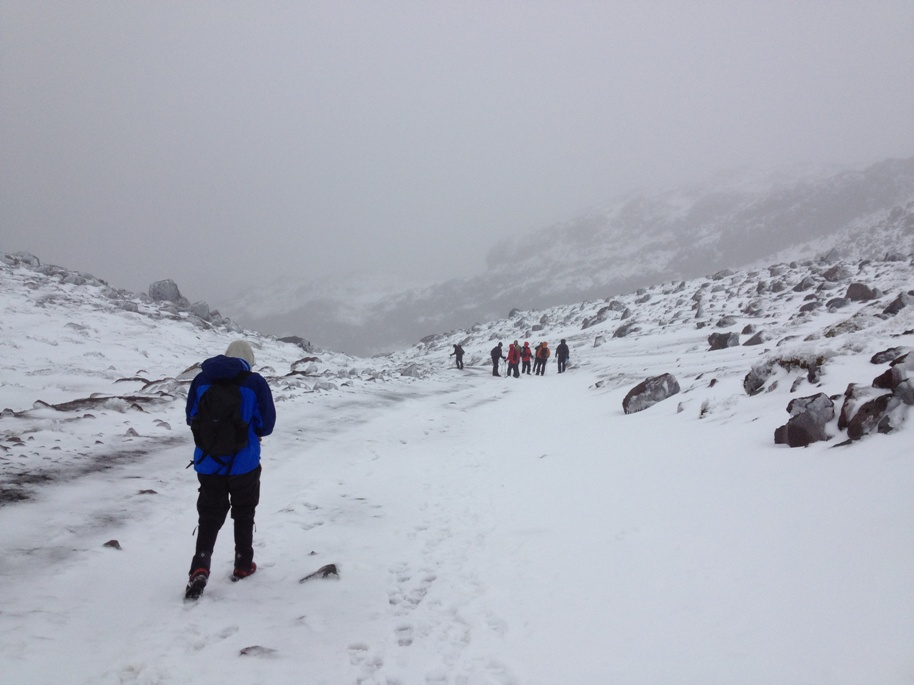 Last night as we prepared for our summit attempt, we could not get American football off of our minds. With Dustin and a couple others praying for a Seahawks win and myself along with all my Ecuadorian recruits pulling for the Packers, the howling winds, soaking mist and ominous cloud cap almost seemed to take a back seat. I say this because it was the mind frame I was in but in reality the weather was front and center. When we arrived in Ecuador, I gloated on our fortune of grand vistas and warm temperatures, but we all know how quickly things can change. And change they did.

With a 6:00 pm dinner and 7:00 pm lights out, we never learned the score but went to bed wondering. This is the main reason I didn’t sleep a single minute but my 11:00 pm alarm showed up unwelcomed anyway. As I ventured outside to inspect the winds, I was immediately greeted with a soaking mist ramming into me at 25 mph. This did not inspire me so I held off waking the group up for another hour thinking things might improve enough to warrant going up. And to my surprise it did! At 1:00 am the rain had turned to snow which made the prospect of climbing a bit more bearable, but the wind still screamed as it whistled through the Cayambe Refugio.

At 2:00 am five out of our eight climbers set off for what would be an uncertain ascent. The other three climbers stayed behind because of lingering chest illnesses they felt would improve with rest over cold, windy, snowy climbing.

It only took 15 minutes or so before our local guides began to express concern about ice covered rock and strong winds. We made the decision to go as high as we safely could, which led us through some steep rock steps and a sandy traverse back towards the glacier, which we visited a mere twelve hours previously. It was on this traverse we got the full taste of the wind’s furry. I know how strong a wind gust needs to be to blow me around and this giant fan was blowing at a constant, strong enough to have me leaning into it looking like Michael Jackson in mid performance, I’m guessing a steady 50 mph.

Shortly after passing this exposed spot it was clear our shot at the top was going to be thwarted. It wasn’t cold and the snow had even subsided a bit but the wind, through its howls, made the decision for us, we needed to turn around. This is never an easy decision to make but in the end it was the right one. Back at the hut we took a little cat nap and then woke to horrible instant coffee and some rope practice. We then packed up and headed out, back to the warmth of 8,000 feet and the fantastic burgers of Cafe LA Vaca, my favorite lunch place.

Now we are settled into one of the oldest haciendas in the country enjoying internet, a laundry service and hot showers. Our failure to reach the summit of Cayambe has only fueled the fire to get to Cotopaxi, also known as the jewel of Ecuador, tomorrow. We will keep you updated as we prepare for this 19,400' snow cone. Thanks for following.

Adam,
You might recall that we got blown off Cayambe the year I was with you as well!

Sorry to hear the wind kept you from summiting. But glad to hear all are well and getting psyched for Cotopaxi. Again, wishing to all the very best!
-jill