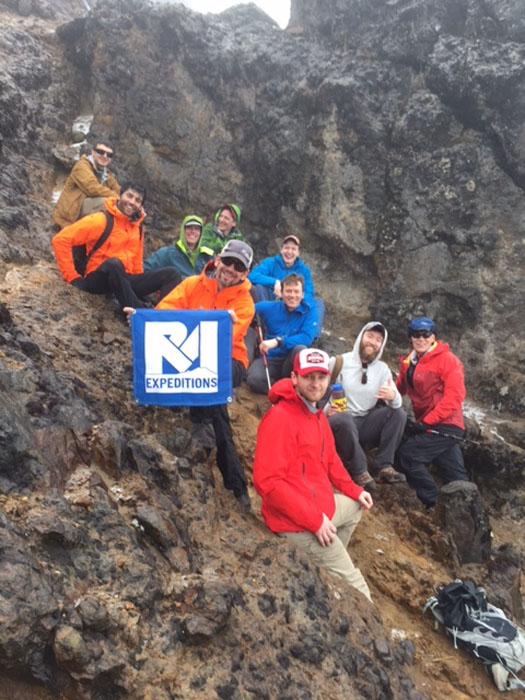 Day two in Ecuador. Not many places in the world offer such easy access to high altitude.  Down in the lower 48, to reach 14,410 feet, the summit of Mt. Rainier, an average climber needs multiple days, a closet full of equipment and a certain set of skills not learned through a YouTube video.  Down here is a bit different.  For example, this morning we were drinking coffee in the hotel lobby, eating pastries and admiring our ten-pound day packs.  At 8 am we loaded into a van, took a 15-minute drive to the base of a still active volcano, got a lift on a cable car to 13,000 feet and began walking. The name of the volcano we stretched our legs on is Pichincha Rucu.  It's summit stands at 15,700 feet and can be reached in mere hours from the city.  Pouring rain greeted us at the top of the gondola but this is what that closet full of gear is good for.  Putting on our rain jackets and pants we braved the storm like any fearless climber would and headed up the trail.  It wasn't long before we crested that 14,410 foot ceiling giving every member, guides aside, a new altitude high point. An hour into the hike, the rain ceased and we broke 15,000 feet by eleven am.  Unfortunately the final 300 feet to the summit is more of a rock scramble than trail hike and true to the days weather, a hail storm ensued so we made the decision to turn around and skip the slippery rock.  The team reached a final altitude of 15,300 feet and to everyone's credit did exceptionally well. After the stroll, we came back to the hotel for some rest then headed out to a fantastic dinner.  All of us gringos are feeling strong and psyched to be getting closer to our first "big" mountain.  This is Adam Knoff and team saying adios.

Good luck on this new adventure Jim (Nixon)!  Looking forward to hearing all about it when you return.  Maybe you and Tom Garner need a Maine vacation this summer!  All the best!  Rich Aspinall 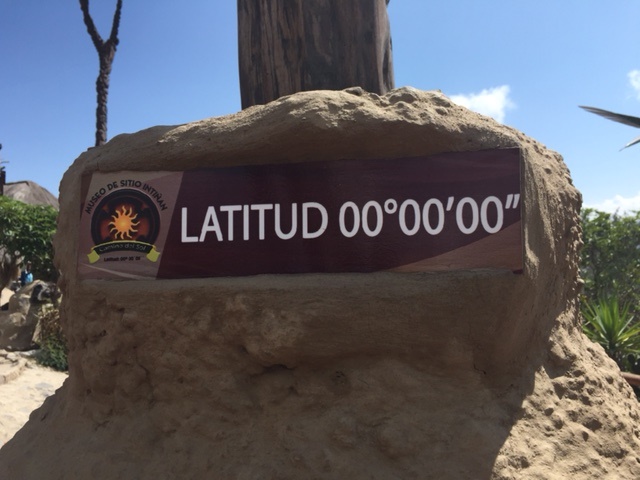 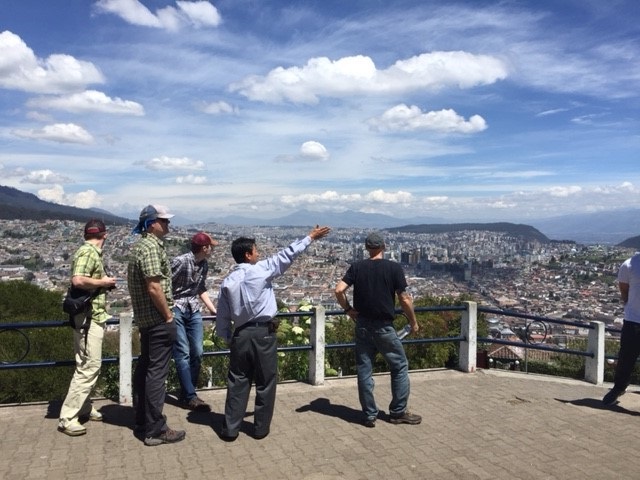 Hola from Quito Ecuador, Today began with two guides, three brothers and five individuals coming together for the first time for the Expedition Skills Seminar - Ecuador. Most climbers flying into Quito arrive around midnight and don't get to the hotel until after 1am. With an 8 am orientation and team introduction, we were blessed to have a hearty breakfast, strong coffee and warm sunshine to get the guys awake. I can say guys because we are a team with no females. From past experience I can say it is usually helpful to have at least one lady keeping the men in check but judging from our first eight hours together, I have a gut feeling we should be generally well behaved. After our breakfast and intro the team packed up in Angel's mini bus for a splendid three hour tour of some of Quito's main attractions. First we visited the "Mitad Del Mundo" or Middle of the World, where we stood on the actual equator. Here we observed visual confirmation of the Coriolis effect, balanced an egg on a nail and watched as gravity played tricks on both our minds and bodies. I would like to say we also saw aliens zipping overhead time travel portals open but unfortunately that happened last week. After we left the center of the earth, we headed into old town Quito where we visited a giant statue of the Virgin Mary, a three hundred year old Cathedral and the Presidential Palace. Having felt let down by absent aliens on the equator I was hoping for a brief chat with Rafael Correal, the country's President, as a consolation prize but we were told he was too busy. Go figure..... After the tour we had a nice lunch, nap and gear check. All in all a pretty full day. Stay turned for tomorrow's dispatch because we will be climbing a mountain higher than any team member has climbed before! Wishing everyone well back home. RMI Guide Adam Knoff & Team Ecuador
Leave a Comment For the Team (2)

Darlene shared your photos and it looks gorgeous.  I’ve been to Quito.  Got bad case of food poisoning at a hotel there.  Denny’s niece lived and worked there ten years and is married to a handsome Equidorian.  Good climbing!

Sounds like you are having a terrific time, stay safe and have fun The Mt. Rainier Summit Climbs, led by Casey Grom and Nick Hunt, watched the sunrise from Ingraham Flats this morning before heading back to Camp Muir. The guides assessed unfavorable avalanche conditions, which kept them from the upper mountain. Both teams are back at Rainier Basecamp, safe and sound.
Leave a Comment For the Team

Mt. Rainier: Teams Turn Due to Weather and Route Conditions The Mt. Rainier Summit Climb teams turned due to avalanche conditions, deteriorating weather and winds. A fair amount of new snow has occurred on the mountain with drifts up to one meter. RMI Guides Casey Grom and Nick Hunt are currently descending from Camp Muir back to Paradise.
Leave a Comment For the Team (2)

We both would like to thank the entire RMI team for your help throughout the climb in the challenging conditions and we feel that we have learned more from those few days with you than any other experience. We also loved hearing about your various climbs.

We had a great time meeting the rest of the climbers and sharing stories. Best of luck in their next endeavors!

We hope to be back next summer with better conditions and even more prepared. It’s defnitely not to be underestimated. The Mt. Rainier Summit Climb, led by RMI Guides Dave Hahn and Nick Hunt, made a successful summit at around 7:30 this morning. Dave reported cold conditions with 10mph winds blowing from the north. With favorable weather, the teams were able to spend an hour on the summit prior to starting their descent. This week’s Expedition Skills Seminar - Muir headed up the snowfield this morning. They will spend the week learning many expedition skills and finishing with a summit bid later in the week.
Leave a Comment For the Team (2)

So proud of you Jennamarie. You are literally the coolest.

The Four Day Summit Climb led by RMI Guides Brent Okita and Nick Hunt were forced to turn at the top of Disappointment Cleaver today. The team faced stormy weather with strong winds with knee deep snow is some places. They are on the descent and will return to Rainier Basecamp early this afternoon. Congratulations to today's Team!
Leave a Comment For the Team (1)

Mother Nature can be tough. Despite the stormy conditions, the team climbed to great heights…..about 13,000 ft higher than I could muster. Congrats to all….

The Four Day Summit Climb led by RMI Guides Brent Okita and Nick Hunt reached the summit of Mt. Rainier early this morning. Brent reported 45 mph winds on the top. The team has started their descent and are en route back to Camp Muir. Congratulations to today's team!
Leave a Comment For the Team (2)

Wow Sean!!!  We are so proud of you and your team!  Our view doesn’t sound so fabulous any more!  Dad and I can’t wait to see details and see pictures!!!  We love you!  Mom

I am so proud of the whole group!!!!! You should be proud of your hard work!!!  I bet it was easier to go down the mountain.  Brian…words can’t say how proud I am of you!!! God bless this great group, always.

The Expedition Skill Seminar - Paradise met in Ashford on Sunday to being their week of training. After a full day on the grounds of Rainier BaseCamp getting ready for their trip, they left early the following morning to begin their climb. The weather was beautiful and the team spent their days training on the glacier of Mt. Rainier. Yesterday the team ascend to Camp Muir where they spent the night. With an alpine start they left Camp Muir to make their summit attempt. The team enjoyed the views from the top of Mt. Rainier with clear skies and light winds. Nick and team will return to Camp Muir to re-pack their gear and make their final descent to Paradise. Congratulations to the Paradise Seminar Team!
Leave a Comment For the Team

The Four Day Summit Climb led by Nick Hunt reached the summit of Mt. Rainier early this morning. The team had clear skies and light winds. They have started their descent and are en route to Camp Muir. Congratulations to today's Team!
Leave a Comment For the Team RMI Guide Nick Hunt and the Five Day Summit Climb reached the highest point in Washington State, the summit of Mt. Rainier, this morning. Nick's report from the summit said today was a beautiful day with light winds. The team left the summit to begin their descent just after 7:00 a.m. PDT. The will return to Ashford this afternoon. Way to climb!
Leave a Comment For the Team
Previous Page   Next Page
Filter By:
check the Summit Registry try our Adventure Finder
Back to Top