Hi all! Billy here checking in for the last time from this year's Denali expedition. Our team showed tremendous poise after our butt kicking on our first summit attempt and rested through another marginal day on the way to our eventual summit day that was absolutely beautiful. We encountered some moderate winds in the 30 mph range but generally enjoyed clear skies and decently warm temps. It took us just over 12 hours of solid work to make the round trip mission from our high camp at 17,000' and the whole team was pretty worked by the end. The next morning we awoke at a leisurely hour, packed up camp and descended the West Buttress back to Camp 4 at 14,000' where we were greeted by Dave Hahn's expedition with cheesy bacon quesadillas! Quite the treat... After picking up our cache at 14 we continued down through extremely deep snow to 11,000' where we ended up camping again because the team was pretty wasted yet again. Our final day on the mountain was surprisingly clear with only occasional sections of whiteout as we marched down the Kahiltna towards Basecamp. Except for a little excitement involving a crevasse fall the trip was mostly a slog. And as we arrived at the lower airstrip around 6 pm we could see the runway markers of the upper airstrip but were relieved to hear from Lisa that we wouldn't need to travel any further. K2 was already on the way and going to land right next to us. And just like that we were in the land of the living slamming burgers and downing beers with all of the tourists in Talkeetna. Talk about a culture shock! Needless to say, the gang went big rocking the Fairview and ended up closing down the Teepee (and nearly getting kicked out!). A proper way to end a successful Denali expedition. Too much fun! I'd like to thank both Mike King and Sean Collon for their hard work and the good times and the rest of the team members for persevering despite crummy weather forecasts and tough odds. It's a trip I won't forget for a while. See ya next year! RMI Guide Billy Nugent.

Congratulations RMI and my ole buddy Doug. Glad to hear you guys had a great trip. One more notch in the belt.

Great going what a trip ! Congrats Kevin , sober up & come home to get ready for another party.
Irma

Congrats on the summit and the safe round trip!!

Ha ha.  And who was the last one standing.  One about to be birthday boy as I recall!  Fabulous trip all around.  Just fabulous. 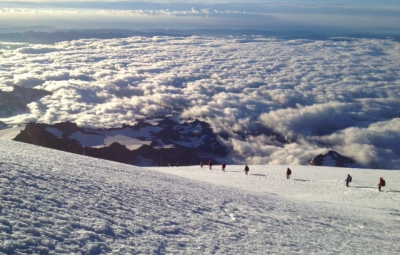