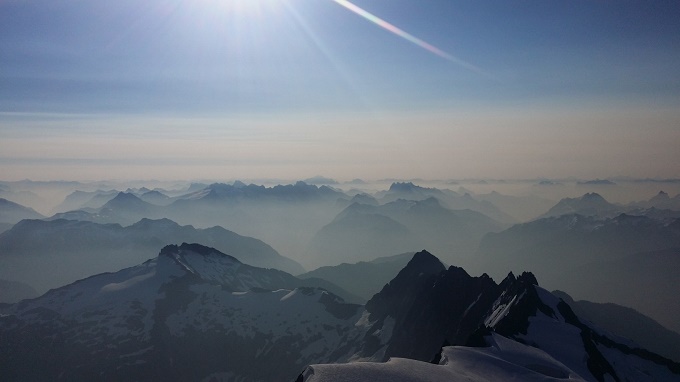 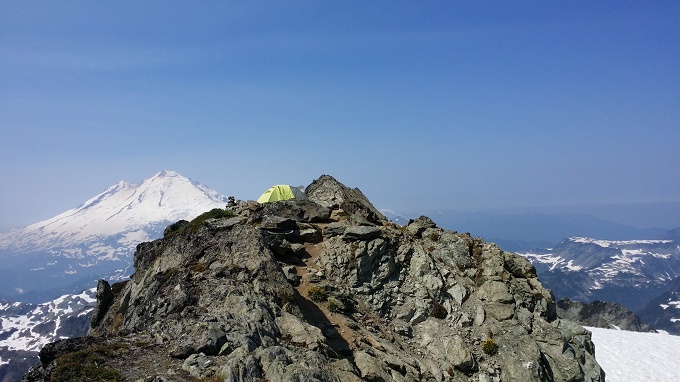 RMI Guides Mike Walter & Sean Collon lead their team to the summit of Mt. Shuksan this morning. Skies are smoky in the North Cascades but the climbers were above it all. They will return to camp for a final night in the mountains before completing their program tomorrow. Congratulations to today's climbers!
Leave a Comment For the Team 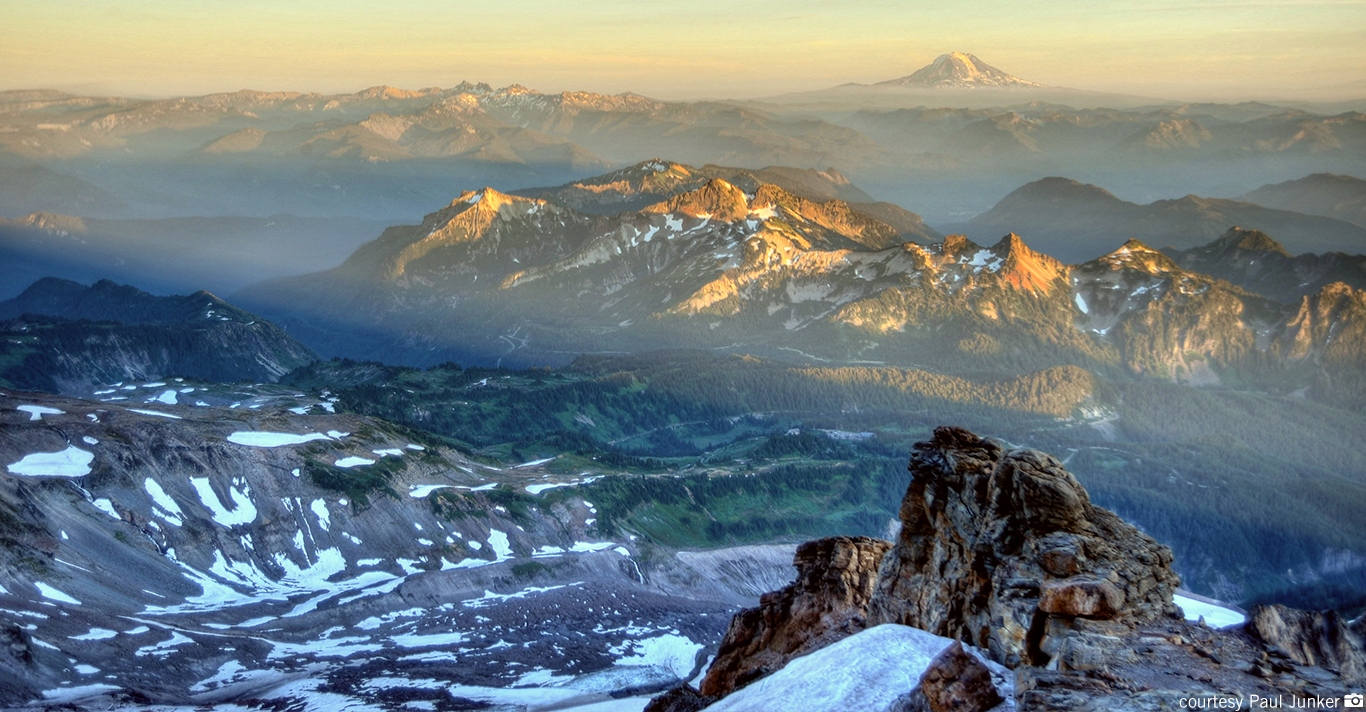 RMI Guide Walter Hailes and the Expedition Skills Seminar - Kautz July 30 - 4 August, 2017 reached the summit of Mt. Rainier today. After several days of training in Ashford and on the mountain the team left their High Camp this morning en route to the summit of Mt. Rainier. The team arrived at Columbia Crest around 5 am and enjoyed the views from the summit before starting their descent. Today is the last day of their program and they will return to the trail head and back to Rainier BaseCamp this afternoon. Congratulations to the Kautz Seminar team!
Leave a Comment For the Team

Hi all! Billy here checking in for the last time from this year's Denali expedition. Our team showed tremendous poise after our butt kicking on our first summit attempt and rested through another marginal day on the way to our eventual summit day that was absolutely beautiful. We encountered some moderate winds in the 30 mph range but generally enjoyed clear skies and decently warm temps. It took us just over 12 hours of solid work to make the round trip mission from our high camp at 17,000' and the whole team was pretty worked by the end. The next morning we awoke at a leisurely hour, packed up camp and descended the West Buttress back to Camp 4 at 14,000' where we were greeted by Dave Hahn's expedition with cheesy bacon quesadillas! Quite the treat... After picking up our cache at 14 we continued down through extremely deep snow to 11,000' where we ended up camping again because the team was pretty wasted yet again. Our final day on the mountain was surprisingly clear with only occasional sections of whiteout as we marched down the Kahiltna towards Basecamp. Except for a little excitement involving a crevasse fall the trip was mostly a slog. And as we arrived at the lower airstrip around 6 pm we could see the runway markers of the upper airstrip but were relieved to hear from Lisa that we wouldn't need to travel any further. K2 was already on the way and going to land right next to us. And just like that we were in the land of the living slamming burgers and downing beers with all of the tourists in Talkeetna. Talk about a culture shock! Needless to say, the gang went big rocking the Fairview and ended up closing down the Teepee (and nearly getting kicked out!). A proper way to end a successful Denali expedition. Too much fun! I'd like to thank both Mike King and Sean Collon for their hard work and the good times and the rest of the team members for persevering despite crummy weather forecasts and tough odds. It's a trip I won't forget for a while. See ya next year! RMI Guide Billy Nugent.
Leave a Comment For the Team (2)

Congratulations RMI and my ole buddy Doug. Glad to hear you guys had a great trip. One more notch in the belt.

Great going what a trip ! Congrats Kevin , sober up & come home to get ready for another party.
Irma

Sunday July 5th 10:45 am PT RMI Guide Billy Nugent just called the office to check in. The team had a long, tough day yesterday breaking trail through the new snow that had fallen on the route. After sleeping in this morning, they are getting ready to depart Denali's 11K Camp. They are hoping to be at Kahiltna Base by late afternoon/early evening.

Hey, it is Billy here just checking in after a safe and successful summit bid. We got up, kind of stalled a little bit because it was a cold morning. We left around 10 pm, it took us about 12 1/2 hours round trip. We were super psyched. So we're back in camp, and like I said before everyone is safe and sound. Now we're just hoping for good weather to beat feet for the airport. That's all I have for now. We are going to eat dinner and get some sleep. RMI Guide Billy Nugent

Congrats to All and especially my friend Jim Latorre! What an incredible achievement!

Way to go Rhonda…you’re awesome! Can’t wait to hear about it - AFTER you thaw out:)
Sue

Thursday, July 2, 2015 - 3:15 pm PT RMI Guide Mike King called the RMI Office from high camp at 17,200 ft on Mt. McKinley. The team spend a snowy and windy night at camp last night. Today they spent the day resting and drying their gear. The team has received the forecast for tomorrow and are hoping the weather will allow them to make a summit attempt. If the weather permits, they will be heading up hill. We wish the team luck!

Doug! We are following your journey. Love from us! Mom n Lar

May the odds be ever in your favor team!

Doug - you know the drill…be safe, be great, move with grace.
~Belladonna

July 1, 2015 6:25 pm PST Hey, it's Billy here checking in from 17,200' on Denali. We are back in camp after our foray up the Autobahn and around the corner on Denali Pass but it was quite windy. The wind along with zero visibility and blowing snow and some wind slab instability conspired to shut down our summit attempt. So we turned tail at just above 18,500 feet and everyone is back down in camp, in one piece safe and sound. We're trying to regroup and figure out what the future holds for us. We'll check in tomorrow and let you know we're up to you. All for now. RMI Guide Billy Nugent

I’m rooting for good weather so you can attempt the summit again! Keep the spirits up, Rhonda! You’re a stud-ette:)
Sue

Foiled by wind slab and zero vis!  I’m wishing for a blue bird day coming up for your next attempt.

Tuesday June 30th 6:00 pm PT Hey there, this is Billy checking in from 17,000 feet on Denali. We woke up this morning and actually almost pull the trigger. The weather was looking really good. But then things kind of soured a little bit. Thin clouds with intermittent snow, and so we eventually pulled the plug on our summit attempt before we really got it going. We're having a weather day today. We are hoping for better weather tomorrow. That's all for now. Bye. RMI Guide Billy Nugent

Pick your moment team, wait and be great!!

Doug - I bid you fair winds and a following sea. My thoughts are with you as you wait to make your summit attempt. And just in case you need reminding…don’t forget to be awesome!
~Belladonna

June 29, 2015 5:20 pm PST Hey there, it's Billy checking in from Camp 5 on Denali at over 17,000 ft. Our crew made the move today. We got up super early this morning and made great time moving up the West Buttress. We're settled in now at High Camp. We spent some time, improving one of the campsites and building some walls. And now everybody's snug up in their sleeping bag hanging out in their tents. We're sort of chilling and filling with food and water. We are hoping for a good patch of weather in the next few days so we can maybe take a crack at the summit. Yeah, that's all for now. Everyone is psyched and doing extremely well. We will check in again tomorrow and let you know what happens. RMI Guide Billy Nugent


RMI Guide Billy Nugent calls in from Camp 5 on Denali.

Hope you summited today. You’ve been in my thoughts all day

Incredible progress - keep it up!!!  Hopefully the “Jim jokes” (ask him to tell you the joke about the bell ringer) aren’t ruining everyone’s time up there.  Looking forward to updates from the summit…

June 28, 2015 5:18pm PST Resting here at 14 after a big day yesterday. Clouds and sunshine are in and out along with the occasional bout of flurries. Nothing major to report. Now that we are poised and ready we are just playing a chess match against the weather. Hoping to get that window that will take us to the summit... RMI Guide Billy Nugent & Team
Leave a Comment For the Team (2)

Thoughts are with you as you push for High Camp…go team.

Doug - “A world without dragons is a world not worth living in.”  ― R.A. Salvatore, Streams of Silver

Next Page
Filter By:
check the Summit Registry try our Adventure Finder alerts for 2021 RAINIER DATES
Back to Top