June 24, 2016 - 10:24 pm PT It began raining at Kahiltna Basecamp around 9PM, and that transitioned to wet snow at about 2 AM. So we didn't go for that Alpine Start we were angling toward. It was still snowing at 7:30 AM when we got up to build breakfast but then it quit and things began to improve. We'd begun to think we'd be stuck in BC for a storm day, but with clearing weather and the knowledge that the glacier was in exceptionally good condition for late June, we decided to make use of the day. As always, it took a while breaking camp and gearing up for this first push. It was awkward rigging sleds into rope travel and it was awkward for some to be on snowshoes with heavy packs. We got out of BC by 10:45 and by then the sky was mostly blue and the sun was mostly hot. After the rain, the surface was a little slushy but not all that bad for travel. We moved down the SE Fork and took a right turn at the main Kahiltna Glacier. We had things pretty much to ourselves with only the occasional one or two European climbers at a time coming past on their way out. We made steady progress, but we weren't moving fast with the slushy conditions. We decided to quit after six hours of work, which had brought us to just about 45 minutes below the more common camp at 7800. We are out under West Kahiltna Peak. All day as we traveled, we could hear avalanches thundering down the mountainsides, and from time to time we'd look hard enough to find the clouds of ice billowing out from the snowy torrents. We had a secure camp up by 6 and dinner by 7 PM so that all could get enough rest for another big day tomorrow. Hopefully on a frozen surface with cooler conditions. Best Regards, RMI Guide Dave Hahn

Go Robin and team! Sounds like some tough going up there and cold! It’s nice and warm and muggy here in NC. We’re all thinking about you and wishing you and the team the best of luck as you all get further along! Russell

Hola! Superbub, Tatto, The Pake and kiddos here! Giving a shout out to the Guy Lard Boof Tard! aka Mike Waters. Wishing the best to you and your team and praying for good weather! 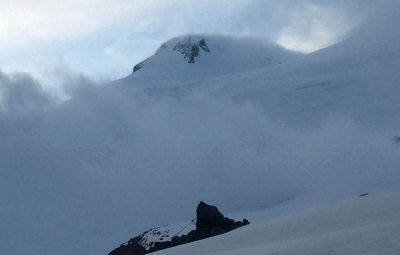