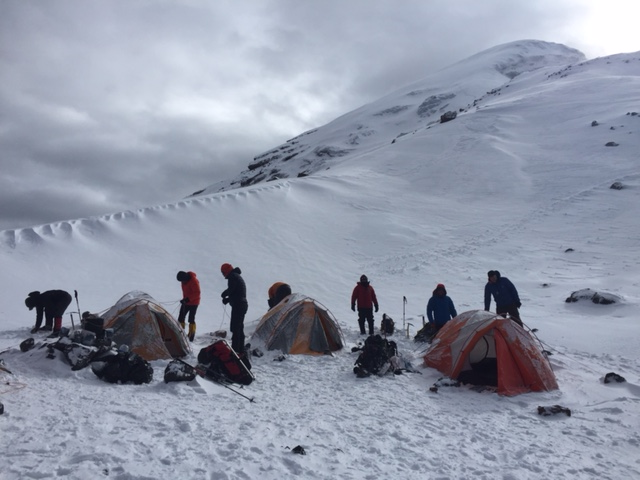 Hola from Banos Ecuador. I am sorry to announce we did not summit Chimborazo today. Here's why. This morning the team woke up at high camp and we couldn't tell if we were in Ecuador or Alaska. As I mentioned in the previous dispatch, the snow level on this mountain is as low as Ive ever seen it. Normally the precipitation falls during the later hours in the day as the clouds build. By midnight those clouds usually dissipate leaving clear skies and good climbing conditions. Of course this didn't happen the day we attempted to climb. When I got out to the tent at 11:30pm, we could barley see our neighbors, let alone the mountain. Light snow was falling and the wind didn't seem overly oppressive but the clouds were as thick as pea soup and air was cold. By the time we geared up and put in a solid hour of climbing, the skies actually began to clear enough to see what lay ahead. Everyone was climbing really strong and the conditions, despite the new snow were the best I've seen that high up. By the time we reached 18,900 feet, the mountain had had enough of playing Mr. Nice Guy. The clouds built, the wind began to blow a solid 25 and the snow began to fall quite hard. With all of these things happening at once, the safety margin in which we felt comfortable climbing in disappeared. The avalanche hazard became to high and the only reasonable option was to turn around. This was a hard blow to the team but everyone handled it well. Chimborazo dealt us a hand we couldn't beat. So goes the tough game of mountain climbing. You win some and you lose some. Fortunately, even the loses create experiences, memories and adventures we won't soon forget. So after the climb, the team descended to the hut, packed up all our gear and headed down to a jungle town called Banos, translated, meaning baths. There are many naturally heated hot springs here as well as good restaurants and pubs. We even found one that serves IPA and Stout. A well deserved treat after two hard weeks of climbing. Add on top of the beer a good beat down by a local group of teenagers on the basketball court next to the hotel and I would say our day ended better than it began. Now we return to Quito for our farewell dinner and travels home. We hope you've enjoyed following along. Thanks for the support. RMI Guides Adam Knoff, Nick Hunt and team saying adios and muchas gracias.

Jim, Really bummed at your disappointment, but I know with you, there will be another day!  Here’s hoping all is well and safe travels home.  Richard

Tough news Jimmy but turning around was the right call…dang

I feel badly about your disappointment, but I am very glad that you used good judgement.  Good work to all of you and thank you for taking us along for the ride.  I hope you got much from your adventure and are able to bask in the experiences you just particapated in.  Jimmy, you are intrepid, for sure.  You’re a tough cookie!!

Aconcagua: Nugent & Team Secure Permits and Get Ready for Trail