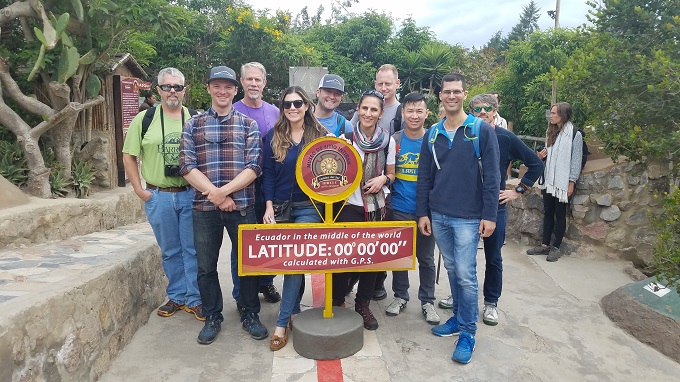 Hello from the middle of the world! Our Expedition Skills Seminar in Ecuador is now officially underway! Despite most of the team arriving to the hotel after midnight last night, everybody was excited and eager to kick off our program this morning. All of the people made it, all of the luggage made it... I'd say we're off to a great start! After only a few hours of sleep last night, we all gathered in the hotel lobby at 8am this morning after breakfast for our first of many team meetings of the trip. Introductions were made and travel tips were shared, and before we knew it, we were all sitting on a bus beginning an incredible tour of the city. Our first stop was at Independence Square, home to the Presidential Palace of Ecuador. Unlike the overwhelming security of our White House, we were able to coax the guards in to letting us walk behind the fences and steal a look in to the main courtyard of the palace, the political center of the country. After waving goodbye to the President (not really), we continued on our way to one of the most beautiful churches in the country: La Compañia. Taking over 150 years to complete, La Compañia is a Jesuit church finished in 1765. It offers a good a good demonstration of various architectural styles, including Baroque, Moorish, and Neoclassical construction styles. Its other claim to fame is the fact that its interior is almost completely covered in gold foil! Our tour then took us from the modern part of the city to the early, colonial districts of the city. By driving to the top of El Panecillo and visiting Quito's Virgin (a 45 meter tall statue overlooking the city), we were able to get great views of the entire expanse of the city. Cloudy skies prevented us from getting our first glimpses of our climbing objectives, but we were happy to be staying dry. Our final stop of the tour took us to the equator, where we explored an interactive museum demonstrating some of the unique properties of life at 0 degree latitude. Only a few of us were able to balance an egg on the head of a nail, but I still have high hopes for this team... Now, back at the hotel, our mission is simple: kick back, relax, and catch up on some much needed sleep. We'll be stretching our legs tomorrow on our first acclimatization hike of the trip, but until then, it's time to get some shut eye. Until tomorrow, RMI Guides Nick Hunt and Steve Gately, and the rest of the team

Your team photo sure shows a good looking group of people! Y’all have a great time and be safe…..I need my husband back in one piece please. Prayers and hugs from Bailey’s Prairie, Texas - Lisa Outterson

Happy to hear everyone made it okay. Make sure to give that Ted Porter a hard time on his 4-0 birthday! Be safe and have an amazing time! Looking forward to the updates. Love, Stephanie Areen

Sounds like a great start! Praying for health and safety, as well as you all having a wonderful time!
Love from Texas, Ryan Mowery