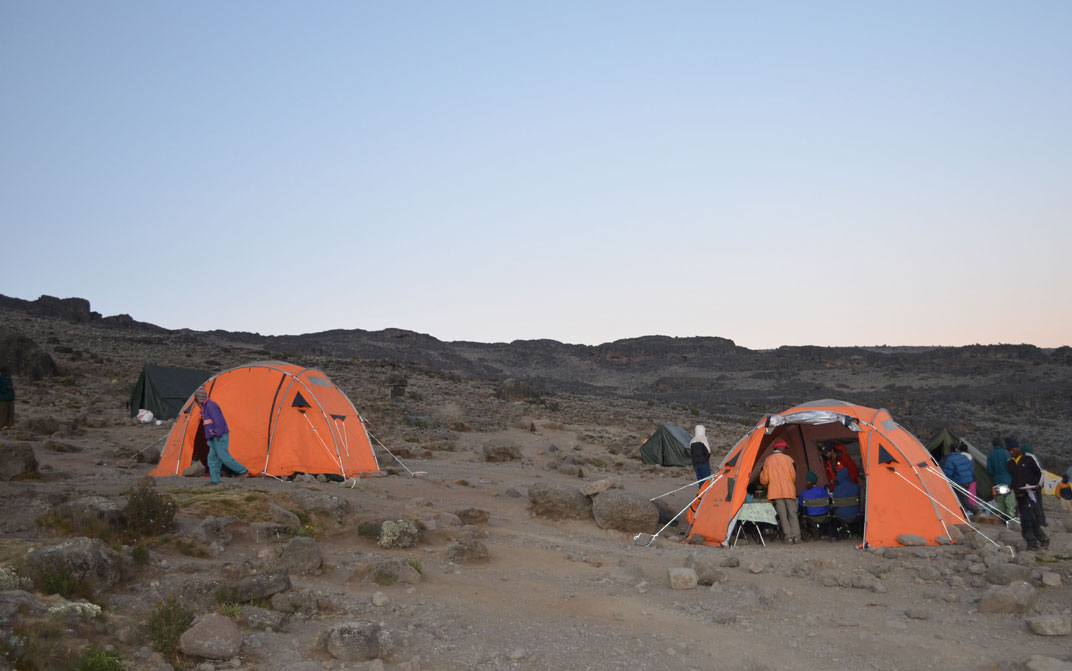 Greetings from Karanga Camp. We'll be spending the night at the same elevation as Wheeler Peak -at 13,161 ft, the highest point in New Mexico (which most of us call home). The day began back in the cold and shady Barranco Valley. We were at the upper edge of the clouds this morning and we got swallowed up by them shortly after our 9 AM departure. There was plenty of anticipation and perhaps a little trepidation at the chance to come to grips with the great Barranco Wall. The team handled the rough and rocky "trail" well, moving safely from ledge to ledge while dodging hundreds of heavily laden, hard charging porters. We spent a fair bit of time simply standing and waiting in line at the various bottlenecks that developed around the dicier moves. But our gang was patient and sure-footed... The perfect mix of traits and talents for getting through the day. We were cloaked in thick fog for our entire walk beyond the wall. The team never saw the Karanga Valley itself -our last encounter with Lobelias and Senecios. We just knew we were in it by the steep descent and just as steep ascent out the opposite side. And that put us in a fog shrouded camp at 2 PM where our tents were already up and the table was set for lunch. The afternoon was spent resting. Some enjoyed the quiet of their tents while others played a laugh-filled Uno tournament with the local guides and waiters. Just before sunset, the clouds dropped away to reveal unreal views of Kibo bathed in golden light. It was one of those magical times when we didn't know whether to focus on the setting sun, the rising moon or the glowing glaciers above. It all added up to another great day on a mountainside in Africa. Today's shoutouts... TG loves MV... and a long distance happy birthday to my brother Hal. Best Regards, Dave Hahn

Bravo to the team!  Sounds like my friend Sara is in good hands !  What a fab experience!

Hi Lexi girl! This is the best bed time reading.  Even has the whole “can’t wait to see what happens tomorrow” cliffhanger thing going. Pun intended :-)  Sending you positive “you got this” thoughts and lots of sea-level Dallas oxygen :-) Enjoy and be safe Taos Team!! Donia XO

Glad to hear that the Taos team is surefooted and did alright on today’s hike.  Thanks Dave for all the postings - Rich and I look forward to them every day.  Hugs to the whole Taos Team and all those that are keeping them safe.  Love, nana and grandpops

Mt. Baker: ALA Climb for Clean Air Reaches the Summit!