What a few days it's been. After a productive and fun day at our climbing school on Saturday we were excited about the perfect day we had yesterday for our hike up to Camp Muir. At times it was almost too hot as the sun's radiation backed. But we all persevered and made it to Camp Muir doing well. Unfortunately, today we received some bad news when the guides kicking in the route discovered a crevasse preventing forward progress up to the higher reaches of the mountain. That, coupled with some not insignificant avalanche hazard from a couple of unexpected evening snow storms has forced us to temper our ambitions for the summit this go around. While disappointed, the team was understanding and in full agreement that getting down safe and sound was our priority. While a handful of folks opted to descend to the comforts of life at sea level, the rest of us explored the upper mountain as much as we could and had a great day enjoying the glaciers and crevasses of Mt Rainier. Later, as the now normal afternoon snow storm continues to dump snow at Muir here, we're passing the afternoon and evening talking about mountains, climbing and the tall tales that take root in such firmament. We're planning on an early departure tomorrow morning when we hope the skies will have cleared and the sun will shine on our descent. See you soon. RMI Guides Brent Okita, Dustin Wittmier, James Bealer and the team

Words cannot adequately express how proud and excited we are for you and your team on this amazing accomplishment.  You even were able to reach the summit!!
God Bless You! 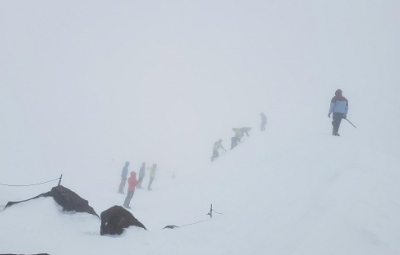 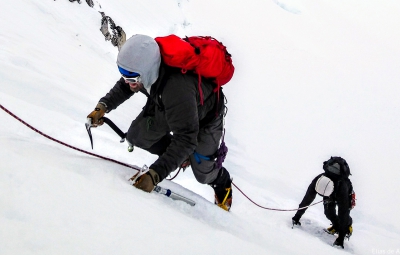