1979 - RMI Guide and Owner, Joe Horiskey, and RMI Guide and Co-Founder, Jerry Lynch, on the summit of Mt. McKinley (now Denali). ---- RMI Guide, Owner, and Alaska Operations Coordinator, Joe Horiskey, recounted his first Mt. Rainier climb on our blog a few years ago. To kick off #50YearsofClimbing we are featuring Joe’s story of his first climb. This August will mark 52 years since Joe’s first climb. Find out more about having your first climb featured on our blog! ---- Forty-six years ago, August 24, 1967, I began my first summit climb of Mt. Rainier. I was a paying customer. The cost was $25, which included a One-Day Climbing School. Nevertheless, as many have, I contacted the Guide Service (it wasn’t RMI yet) and pleaded my case to avoid the training and lessen the price. I pointed out I had backpacked earlier in the summer and encountered snow, which I successfully negotiated. Alas, the manager informed me I needed the Climbing School, but proposed I carry a load of food to Camp Muir to work out the cost. Terrific! John Anderson drew a rudimentary map of the ‘route’ to Muir one Saturday morning at Paradise in early July and my only question was “how many round trips?” (I was totally serious). His deadpan reply was that one ought to do it. My trip to Muir is another story for another time. I managed to deliver the supplies and participated in Climbing School the following day. The evening of August 23, 1967, some neighbors from Lakewood dropped me off at Paradise. My folks had provided money for a hot dog at the snack bar, but a room in the Inn was out of the question. Not a problem, so I headed to the Inn to kill the evening before finding a suitable campsite. Employee Talent Shows were a nightly occurrence at Paradise Inn in the good old days. The hotel management hired people oftentimes based primarily on musical or other talent. At the conclusion of the show a juke box was cranked up, and employees and guests alike hit the dance floor for a couple of hours. I was content to watch. At 10:00 PM I donned my waiting pack (a wooden frame Trapper Nelson) and walked up the Skyline Trail a short distance above Paradise Inn. There I settled in beneath a cluster of sub-alpine fir and spent the night. Dawn on Saturday, August 24th, promised a perfect day for the trek to Camp Muir. Guide Service headquarters was located in the basement of the Visitor Center (the flying saucer) and there I met the other clients and our two guides, Tony Andersen and John Rutter. There were five clients, including myself. I can’t remember details about the trip to Muir, other than I positioned myself in line directly behind the ‘cabin girl’ headed up to cook for the guides. There was no client Bunkhouse, instead the guides on each trip would pitch and strike White Stag car-camping tents (the guides headquartered in the tiny, rock Cook Shack). Dinner was provided as part of the fee: beef stew & mashed potatoes (from #10 cans), as well as breakfast when we awoke to climb (#10 can peaches). Even a sleeping bag was supplied (I had no concern of when it may have been cleaned last). Summit day took 12 hours round trip: nine hours up and three hours down. There were three ladders to cross on the Ingraham Glacier. We left Muir at midnight and about half-way across the Cowlitz Glacier, I realized I’d left my gloves in camp. No big deal; I would tough it out. On a side note, it goes without saying we weren’t wearing helmets, beacons, harnesses or headlamp (we carried flashlights), or even gaiters. I wore wool army pants, my ‘parka’ was a Navy pea coat (heavy wool), and we were tied directly into the 150’ goldline rope with a bowline on a coil or bowline on a bight. Above the first rest break, we negotiated the ladders and traversed north onto Disappointment Cleaver. My hands were pretty damn cold (the guides hadn’t noticed my predicament) as we ascended the spine of the Cleaver. On top of DC we took our second rest break and lo and behold, one person decided to call it quits. Before resuming the ascent I screwed up my courage and asked the person staying behind if I could by any chance borrow his gloves…of course I could! High on the summit dome I was really starting to run out of gas, and we were still more than an hour from the crater. Could I/Should I drop out?! John Rutter’s emphatic answer was a resounding NO! I kept plugging. Now the rim was in sight, and slowly getting closer. But then…what the hell?! Instead of halting for a much needed break we didn’t so much as pause, traversed through the rocks, dropped into the crater and crossed. Sign the book. Un-tie and reach Columbia Crest. Hero shot. The weather was perfect. It was 9:00 AM, Sunday, August 25, 1967. 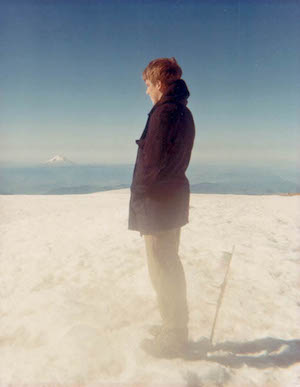 August 25th, 1967 - Joe Horiskey, age 16, on the Mt. Rainier summit. Mt. St. Helens, pre-1980 eruption, in the background. Occasionally over the years I have wondered if I blocked our descent from memory; was it that much an ordeal?! I recall very little, other than being incredibly thirsty. In retrospect, we took some wrong turns on the DC (Disappointment Cleaver), which necessitated backtracking uphill (killer). At Muir we were plied with Kool-Aid. The descent to Paradise took forever, but at the parking lot I was one happy, exhausted 16-year-old. 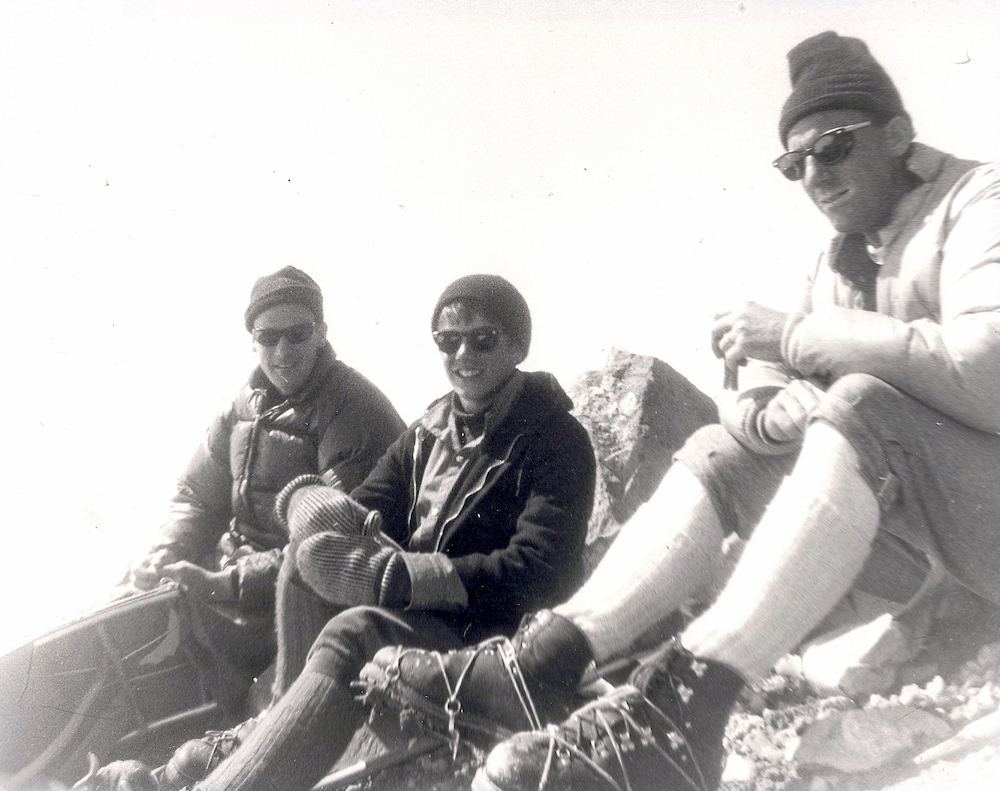 1968 - Jim Whittaker, Joe Horiskey, and Lou Whittaker on Mt. Rainier. Joe's first year working for the guide service, which became RMI the following year. I didn’t play organized sports in high school; I grew up with parents who hated camping (but enjoyed road trips and appreciated National Parks); to suggest I wasn’t particularly studious is a gross understatement; but I had just discovered something I loved, that would stay with me for the rest of my life: climbing. Over the next winter I bothered Lou incessantly about becoming an Apprentice Guide (I even applied for work at Paradise Inn, but evidently lacked a requisite talent). At some point (maybe just to put me off), Lou and/or John Anderson said to show up at Paradise in June, and see if there was work. I did; there was; and, there still is! RMI Guide Joe Horiskey

Great story and still kicking it after all these years. Really cool that you still have the picture of your first summit. You and Link were the guides on my first RMI climb in ‘85. Still my best memory. Congratulations and thanks for helping me and others with that accomplishment. Trace Leffler.

How is it that I’ve known you for some 40+ years, worked with you at RMI for 17 years and still have never heard this account of your first ascent of Rainier. It’s so you!
(Great seeing you a couple of days ago).  Carry on, my friend.

Awesome recounting of a great adventure. Seriously wearing a wool jacket, camping above Paradise and canvas tents at Muir? Thanks for sharing your story and I am amazed at all the detail you could remember. I have absolutely no idea what I ate on my first climb up Mount Rainier.

Your awesome my brother