Hello world, We woke up to crystal clear skies last night, which hasn’t been the norm this season here in the Cordillera Blanca. But this beautiful night so happened to coincide with our climb of Pisco...just our luck! It was a really long day to say the least. It’s a tricky walk for the first several hours just to reach the glacier; up and over the moraine, across a boulder covered rock glacier, and up steep trail and slabs, all done in the dark. The stars were out which made for some wonderful views at breaks. A few more hours of dark while ascending snow and ice and the we finally saw some sun...which proved to be one of those classic Cordillera Blanca sunrises that are hard to describe. Just spectacular! A few more hours and we found ourselves just under 19,000’, on the summit of Pisco. We were above a thick cloud deck and the highest peaks of the Range were penetrating the clouds all around us. It was a special moment for this team who put in a lot of hard work and dedication into their climbing adventure in Peru. We stayed on top and soaked it all in for almost an hour before we walked down into the clouds for a long retreat back to Base Camp. All in all, 12.5 hours, Base Camp to Summit to Base Camp. We took the afternoon to get super tranquilo, as tomorrow, our journey back to civilization begins. RMI Guide Robby Young, Alfie, William and Team ‘Fuerte’

Congratulations to the whole team for an amazing climb!  And thanks to Robby, William and Alfie for getting the team out and back successfully and safely!

Mt. Rainier: Bickford, Hoch, & Team Turn At the Top of the Cleaver 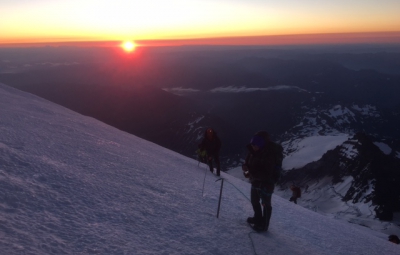