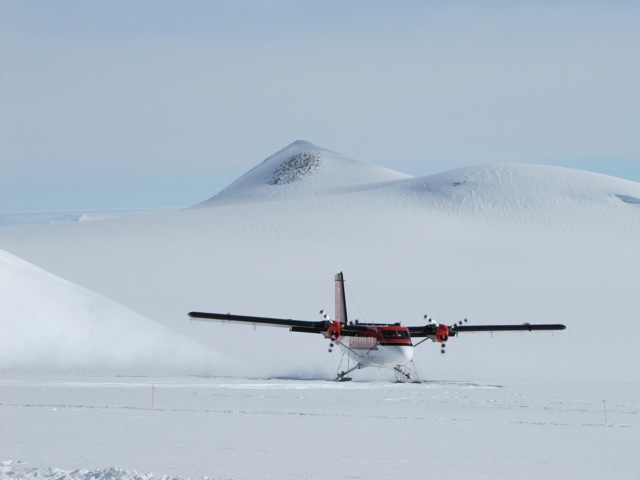 Our night in Punta Arenas was short and loud... to be honest.  It was Friday night and the town square was chock full of partiers and demonstrators beating drums and waving flags.  We were out of the hotel by 5 AM and bound for the airport -sleep or no sleep.  The team filed through security in an empty airport and then we walked out to our trusty Gulfstream IV to load up.  At 6:40 we launched and left South America.  We had fine conditions for flying, and the Gulfstream has plenty of windows, but for the most part, clouds blocked our view of Tierra del Fuego.  Many of the team dozed or read over the Drake Passage, but all began to come alive when we first spotted icebergs... and then ice flows, ice shelves, and finally the glaciers of mainland Antarctica.  During our final half hour in the air, we had ridiculously clear views of the Ellsworth Mountains and Mount Vinson’s less traveled Eastern flank.  Then our all star pilots, Fred and Curt, had the G4 on final approach at Union Glacier.  We were all paying pretty close attention as the wheels touched down on hard ice and the plane rolled along at high speed.  Reverse Thrust did the trick nicely and the roll turned into taxiing into position for disembarking and unloading.  Our first steps in Antarctica were a thrill.  We were each a little surprised at how pleasant the weather was.  No wind and relatively mild temperatures meant we were comfy in light down coats.  Handshakes, fist bumps and highfives all around seemed the appropriate first order of business.  But then we got the plane unloaded and said goodbye to Fred and Curt who rocketed down the ice and into the air again on their return to Chile.  Our “ground team” of ALE staffers scooped us up in a bus with enormous wheels and brought us via ice highways to Union Glacier Camp.  Our flight had taken 3.5 hours (by comparison, the “normal” Ilyushin 76 ride is about 4.5 to 5 hours).
We toured the camp around noon and then basically had some time to kill.  Our Twin Otter flight to Vinson was planned for about 5:30 PM.  We ate, played soccer, rode fat tire bikes and messed with electronics.  Finally, we loaded onto two ski equipped airplanes and enjoyed a spectacular cruise through progressively bigger ice covered mountains.  The Canadian pilots, Monica and Russ, flew alongside one another for much of the hundred miles.  We landed going uphill at 7,000 ft on the Branscomb Glacier and hopped out at Vinson Basecamp.  Things were quite busy for a few minutes as the planes were emptied of our gear and then filled by a team leaving the mountain.  Once the Otters were in the air again, Vinson Base got extremely quiet and calm.  We met our ALE staff and fellow guides, Pachi Ibarra, Namgya Sherpa and Lakpa Rita Sherpa (who, between them, have 32 Everest summits).  We had an amazing dinner by Chef Murph who crushed it with Lamb Shanks and Broccoli.  Then we settled into our tents and sorted a little gear.  The travel is complete, the climb starts tomorrow.