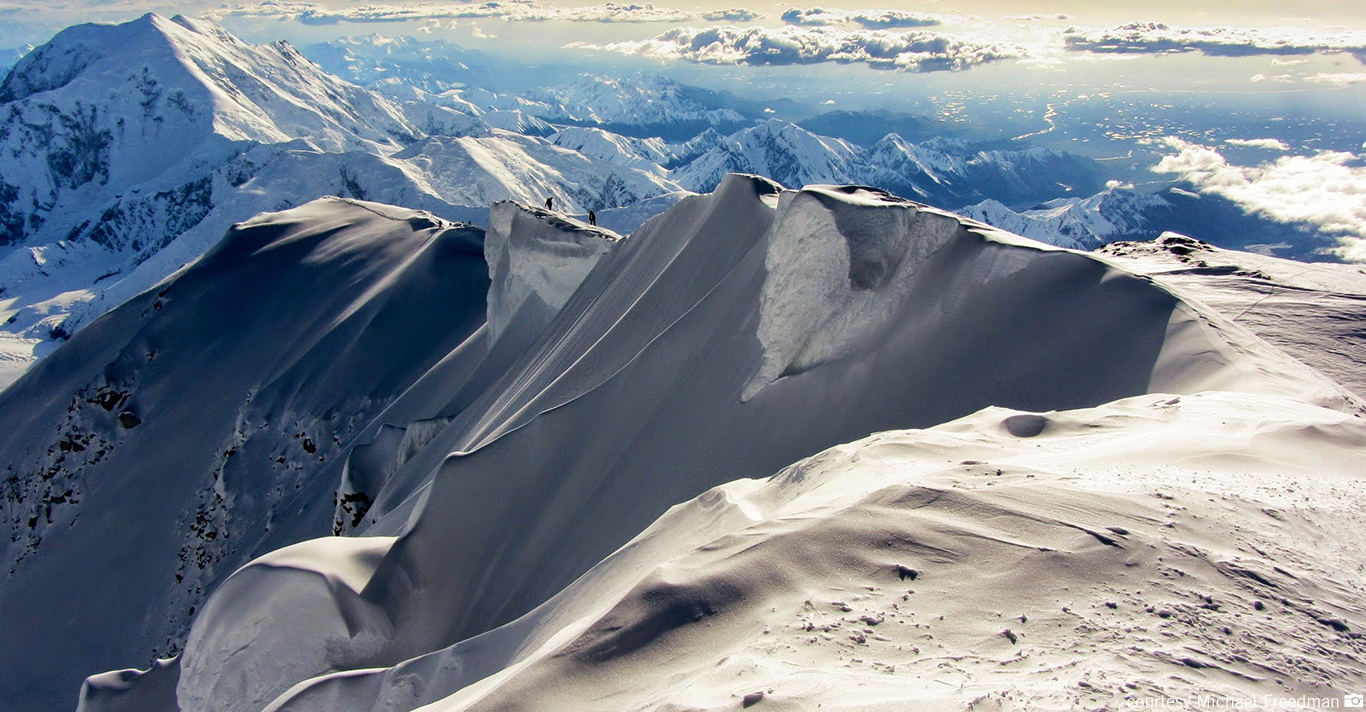 I’m going to start with the spoiler-100% of our team made it to the summit! This was very special because of the excellent chemistry we developed on this trip. To get to the summit, we had to travel across the Autobahn-clipping in and out of over 50 pickets, climb past Zebra rocks, take in the views at Denali pass, do the 100 yard dash across the football field, tackle pig hill before finally arriving on the summit ridge all while changing layers of clothing throughout the day. The summit brought tears to many of our eyes.  It took us just under 7 hours to reach the summit from 17,000 camp. At the summit, everyone exchanged hugs and laughter. Some commemorated with flags and special notes for loved ones. We took lots of pictures and celebrated our hard effort before we descended back to camp in 3 hours and were completely exhausted. Our celebration included watching Steve, who carried a hula hoop he found in Talkeetna to the summit, break the world record for completing over 30 seconds of hula hooping at the highest elevation recorded for the activity. We all videoed the event for the record book.

I want to also share my own personal story which motivated me to climb Denali- The highest mountain in North America. After hiking the Appalachian trail in 2018, I decided I needed a new challenge which was tackling the highest point in every state. I quickly realized this goal included Denali and Mt Rainier and that i better get working on those two mountains since I wasn’t getting any younger. Having no mountaineering experience, I did some research and decided to climb with RMI since they guided on both mountains and came with high reviews. To get some experience, I decided to take the kahiltna seminar followed by a climb of Rainier. Covid initially delayed my plans by a year but in May 2021, I completed the Kahiltna seminar only to find out a month later that I had stage 1C ovarian cancer. I had surgery in July and started 6 rounds of chemotherapy which ended in December. I wanted to have a goal to focus on during chemo, so I signed up for the June 15th climb of Denali. Knowing this was a daunting task, I went hiking everyday during the four months of chemo no matter how sick I felt. Amazingly, I continued to get stronger and fitter and climbed a 13,000 foot mountain in Colorado in November. I think I had this overwhelming desire to push myself because I didn’t want to let cancer interrupt my goals. Another part of me wanted to do something that was as close to mentally and physically demanding as combating cancer as I could find. I certainly believe climbing Denali fulfilled that objective!  Standing on the summit was thrilling but at the same time I realized the yearlong journey was the meaningful part not the single destination.

Late to the party but my congratulations are just as strong.  You all rock!  Steve and his hula hooping self and Mary Beth.  MB for you I am just without words.  I was diagnosed with Stage 2B breast cancer in 2018 and just getting through it all about broke me.  Reading what you accomplished during your treatments and since is just so motivational.  I’m so glad you were part of this team whose blog I followed because of Steve.  The Universe sure is magical.

Congratulations to the whole team!!  What an accomplishment for you all.  Mary Beth you’re just amazing and I can’t wait to hear what your next adventure might be.

What an amazing accomplishment!!!  Congrats to you all.  I had tears of joy just reading the blog.  So proud and excited for you (steve marker).  donna

Thank you for sharing your inspiring story Mary Beth! I agree with Stella, you’re a badass warrior! Congratulations to everyone!! I look forward to hearing all about it and seeing photos/videos-especially Steve’s hula hooping!
Awesome job guides and climbers!!
Now get down safely so we can FaceTime!!

I am so proud of you!  You have been amazing throughout the whole nasty journey and this is the bestest cherry on top (and congrats to all the team)

MB!!  You are the baddest bad ass I know!  I never had any doubt you would be successful. You have overcome so much and I’m so proud of you and so glad to call you my friend of almost four decades.

Congrats Hyde!  Can’t wait to hear about it!

So happy for you all. You’ve worked so hard Mary Beth, I’m thrilled you reached the summit but it’s great words that it really is about the journey.

Congrats Hyde! You are kind of a big deal! See any snow hoooogggsss!!!
Hassett says you can ride double with him now.

Congratulations to the team! Mary Beth,  you continue to inspire me. Thirty years of, “You’re gonna do what?” So happy for you!

To all, but directed at my hula hooping son.  Congratulations on an amazing adventure, pushing yourselves to all limits.  Please remember to be safe on the way down, I am sure I speak for all your loved ones, have fun, be safe, we’re not done with you yet!

Congratulations Mary Beth on your many accomplishments. Your next goal should be some well-earned rest. Glad the whole team made it up, around and around, and back down. So proud of you Steve(n).

MaryBeth, you are a badass warrior.

Congratulations from the hula Hooper’s grandmother!

Congratulations to all of you!!! Mary Beth I especially applaud you after going through the big “C” and moving on to this amazing accomplishment! Thanks for being there with my Holly Hollar as an outstanding teammate and friend!  Debbie

Denali Expedition: Hahn and Team Journey to the Edge of the World