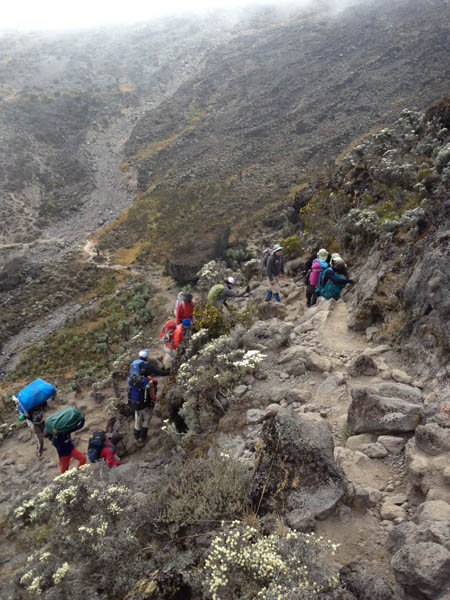 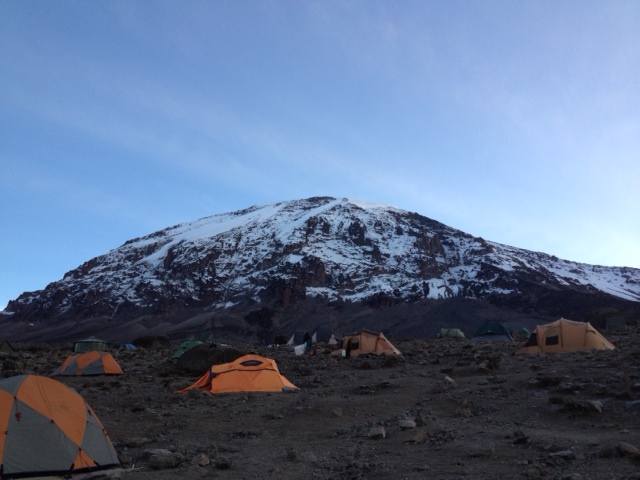 A number of the team reported their “best night yet” at Barranco Camp. Perhaps that was because we’d put in a good hard day, but it could also have been the calming ambient noise of waterfalls and streams flowing near the tents. We were drinking coffee at 7:30, still before the sun found its way into the steep sided valley. After another great breakfast, we were headed off to climb the Great Wall at 9 AM. Luckily, we don’t have too many other teams on our schedule and so “traffic” was light as we tackled the steep rock ledges of the lower wall. Frank led the team today, while Freddy, Philibet, Naiman and James kept careful watch on the team, pointing out the odd missed hand or foothold in the rough lava scramble. It was quite pleasant to rest atop the wall in calm sunshine with the steep bulk of Kibo shining overhead. Another, easier section of walking took us to the steep cut of the Karanga Valley. All that remained then was to drop down one steep side of the gorge and to march up the opposite side. The team mastered the “rest step” on this ascent and kicked in some “pressure breathing” for good measure. We rolled in to camp at 13,100 ft at about 1:30 and were sitting down to lunch not too long afterward. Clouds formed up to hide the upper mountain and to shield us from the strong sunshine for the afternoon. We’ll see if they break up for sunset and to allow our traditional stargazing after dinner. Best Regards RMI Guide Dave Hahn

Great job team! Once again beautiful views! So happy for yu all and what you have accomplished!! Of course.. hugs to Emily and Ryan!! Climb on!! 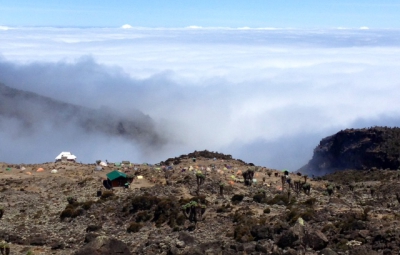