Monday, May 20, 2019 10:59 pm PT I was up this morning early to keep a close eye on the weather in anticipation of a potential move to 14k Camp. Puffy cumulus clouds clung to the surrounding terrain features and were lapping in and out of camp like the tides at about 6AM. Our forecast was calling for an 80% chance of snow showers and increasing south winds into the evening. I opted to give the weather an extra hour to show it's true intentions. I could hear the noises of other teams rustling around, presumably preparing for their own move to 14k Camp. I've seen plenty of deceiving mornings here in the Alaska Range luring you to trust that the forecast was wrong, as if so often can be. I ultimately didn't like the look of it. The team has worked hard for five days now and a full rest day seemed appropriate before committing ourselves to the higher altitudes of the mountain. So we slept in until about 9am and made a wonderful breakfast of eggs and hashbrown burritos that lasted nearly until midday. By then the clouds had overtaken camp and it began to snow lightly. By 1pm the snow intensified and the forecasted south winds showed up early and turned camp into a whirlwind of snow that made it hard to see across camp. Wrapped snugly in our warm bags we all felt good about our decision to take an extra day. It's not always you get such confirmation of a decision well made but today we did and it felt good all the while snuggled up in our warm bags reading and snacking the afternoon away. Tomorrow's forecast looks much more promising and we'll repeat the process of waking up early, sticking our heads out the tent and making another decision. Hopefully this time we'll like what we see and we'll get to move on up! Thanks for following along everyone! RMI Guide Steve Gately

Hi Steve. Bruins swept, sitting and waiting on a 3-2 blues over sharks series. Chara still 7’0” on skates and moves like a sack of pea gravel. Go Red Wings. 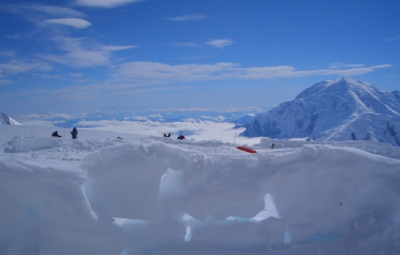