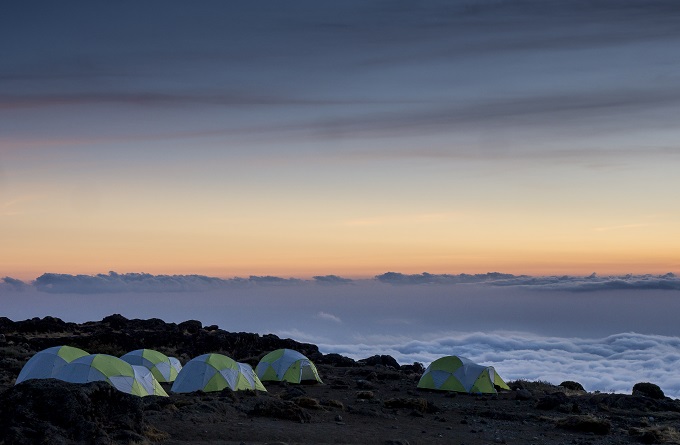 We were treated to another clear morning -above Machame Camp at least- there was a sea of clouds below, but that didn’t bother anybody. We enjoyed a 7:15 breakfast and by 8 AM we were ready for walking. John, the lead guide on our local staff, formally introduced us to the fifty man team of porters, cooks, tent builders, waiters and guides helping to get us up Kilimanjaro. The team sent us off with a song as everybody clapped and danced along. The trail started out immediately more steep and rugged than yesterday’s route. We gained altitude quickly in a forest of giant heather. Ultimately we reached a ridge crest and followed it for several hours, still steadily gaining height. The final hour involved a traverse out to the left where the hike became a mild scramble requiring good hand and footholds on the rock. We reached a high point at around 12,900 ft as we turned a corner onto the Shira Plateau and then it was an easy downhill stroll into camp at 12,600 ft. We reached Shira Camp near 1:00 in the afternoon and so had most of the afternoon for resting, eating and drinking. As with yesterday, things clouded up by midday and this time we had brief rain showers in the afternoon, which just made it a little easier to nap inside the tents. The clouds melted away by evening and we were treated to a fine sunset and great views of 15,000 ft Mt. Meru off on the western horizon. Best Regards, RMI Guide Dave Hahn