Kilimanjaro: Hahn & Team Get Quick Glimpse of Kilimanjaro Before Ascending to Shira Camp 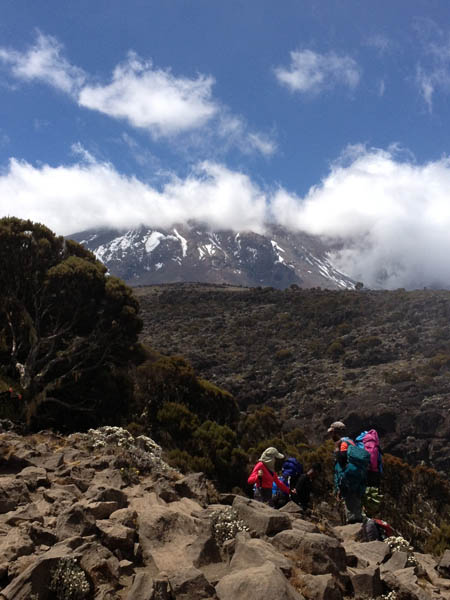 We did get a peek at Kilimanjaro this morning before breakfast. The glaciers and icefields were seemingly hanging at impossible angles on Kibo’s flanks. But since -at Machame Camp- we were just in the top layer of a sea of clouds, the views didn’t last too long before we were within the soup again. Nieman introduced our Barking Zebra staff after breakfast -we are supported by fifty men- and then we were treated to a couple of songs as everybody danced and clapped along. Then it was time to get walking at 8:30 AM. Immediately out of camp, the trail got a little more difficult than what we’d encountered yesterday. The trail became a series of rock steps, like a giant stairmaster up through a corridor of giant heather that became a little less giant as we got higher. Eventually we ended up walking along a ridgeline above the clouds. We had great views of Kibo (Kilimanjaro’s central peak) and could look around as the vegetation changed with increasing altitude. Large white-necked ravens flew acrobatic and aerobatic maneuvers in the thermals around us. We began turning to the north and climbed a few small rock walls to get out to the Shira Plateau -west of Kibo. From this 13,000 ft high point for the day, we then had an easy walk down to our camp at 12,600 ft. It took us five hours on the trail, which meant we had most of the afternoon to lounge about in Shira Camp, getting used to the altitude, stocking up on food and water. The clouds came back over in late afternoon, depriving us of a much anticipated sunset, but when we came out of the dining tent after dinner, things had cleared and we had world class views of the night sky. The Southern Cross, the Milky Way, Jupiter and Saturn were all easily visible and making it tough to get inside our sleeping tents for the night. Best Regards RMI Guide Dave Hahn