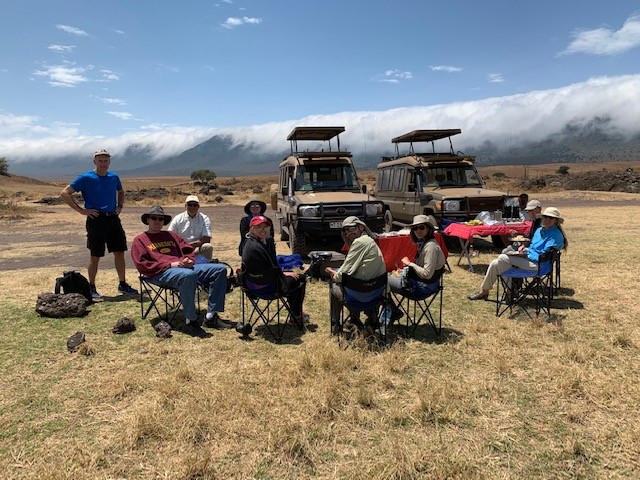 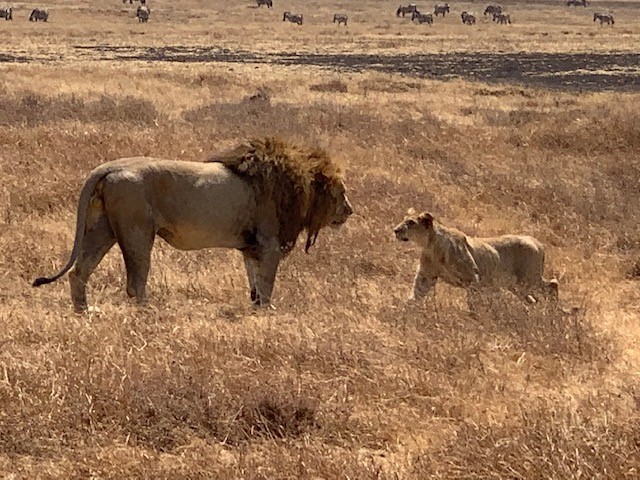 It was another pre-dawn start... not quite as early or arduous as our Kilimanjaro summit day though. We piled into the Landcruisers and rolled out of Plantation Lodge at 6:30 AM bound for Ngorongoro Crater. The clouds were already low and thick and we were gaining altitude -so by the time we hit the rim of the giant collapsed volcano, we were in fog and murk. Michael and Francis didn’t have any trouble bringing the 4X4’s along the rough dirt road, giving the team the quintessential “African Massage” as we bounced along. Visibility had improved by the time we dropped into the crater with the critters. We began -as we had yesterday- focusing on individual animals, until the scale of this new place became apparent and we started counting herds rather than heads. Zebras caught our attention initially, since they were swarming the road. But Cape Buffalo, Wildebeest and gazelles became commonplace and routine within minutes as we saw them by the thousand. Early on we happened on a big pride of lions resting in the grass. There were two big males and perhaps 15 females and youngsters of various ages. Those included three tiny lion cubs that continually climbed over and under their mom, giving out little yelps and meows. The lions would sit up from time to time looking intently at hartebeest and zebra who were trying to figure out how close was too close in their morning walk to water. We moved on to cross the crater and visit hippos and a million new birds. Our picnic lunch was alongside a bunch more hippos in another corner of the crater. By this point, the clouds were clearing and the day was warming up. Our goal following lunch was to find Rhinos. We scoured the hills at the margins of the crater, we trained binoculars on a hundred distant grey rocks and logs and suspect shadows under trees. But the Rhinos didn’t come out to play. We contented ourselves with finding two mature bull elephants with enormous tusks. In late afternoon, our guides put the cruisers in four wheel drive and took us up and out of the crater. We made it back to the Plantation in plenty of time for sundown in the lap of luxury. Best Regards RMI Guide Dave Hahn

Kilimanjaro: Hahn & Team Enjoy Comforts of Beds and Showers, Now on to Safari