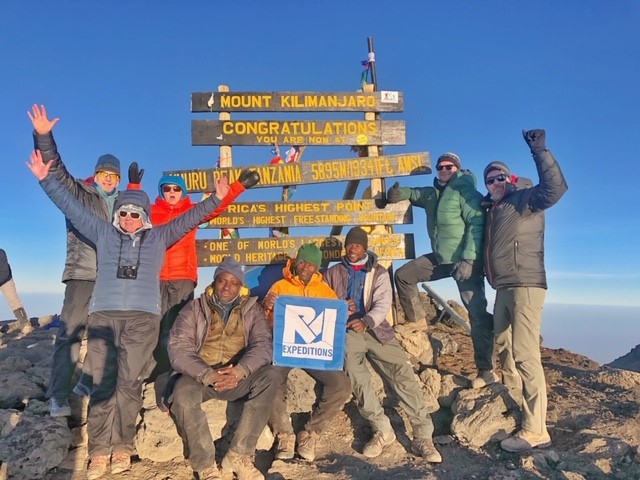 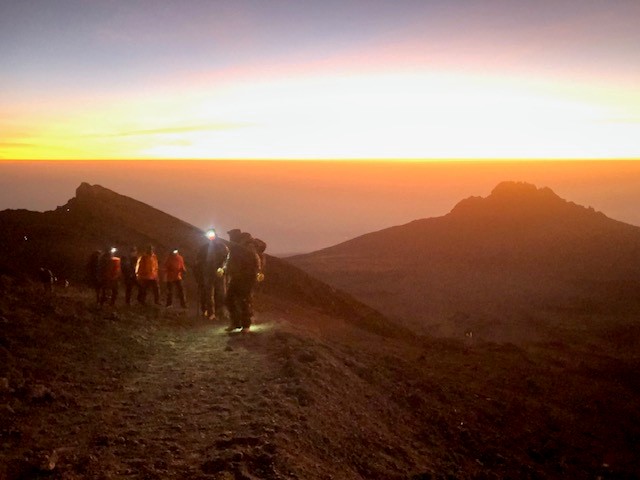 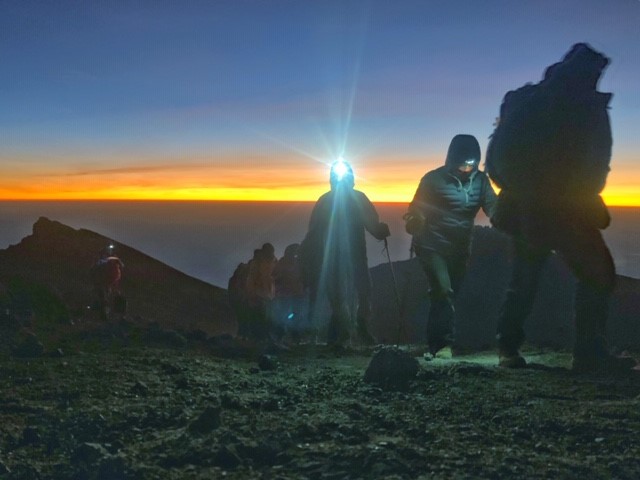 Summit! Today we had a wonderful albeit long day climbing to the summit of Kilimanjaro. The team woke at 11pm as we planned to thankfully clear skies after a cloudy evening that had us wondering the lay ahead. We had a quick breakfast of porridge, tea and coffee before hitting the trail at 12am. We climbed in hour increments with 10-15 breaks in between, which we've been doing every day thus far. The weather was really nice, although it was a little cold which kept us bundled up for most of the day. It was one of the busiest days I’ve seen on Kili with more than 200 climbers, but the team timed everything just right and took great care of themselves. The climb took about 7hrs to reach the top, and thankfully the sun had risen shortly before to help warm us and boost morale after climbing through the night. Once there, we hugged each other, enjoyed the view and took plenty of pictures of the sign that adorns the “Roof of Africa”. It was a true test of endurance for most of the crew, and I'm really proud of everyone. We safely descended back to high camp, had a quick lunch, repacked and continued further down the mountain to our final camp on the mountain, where we are about to have dinner and then head to bed for some well deserved sleep. Everyone is really looking forward to hot showers tomorrow to say the least. RMI Guide Casey Grom and the Kili summit crew

Congrats!!!  What a view from the top of the world.  Can’t wait to hear all about it!

We are so proud of you!  What an amazing accomplishment.❤️❤️

CONGRATULATIONS MOLLY!!  You are an amazing woman!!  Fearless! And Driven!!
So happy for you!!  Can’t wait to see you and hear all about it.

YOU GO GIRL!!!SO proud of you.

CONGRATS!!!! To my wife Molly and the rest of the team! We’re so proud of you!

Mt. Rainier: Bond, Schmitt, & Team Get Turned Around Due to Weather