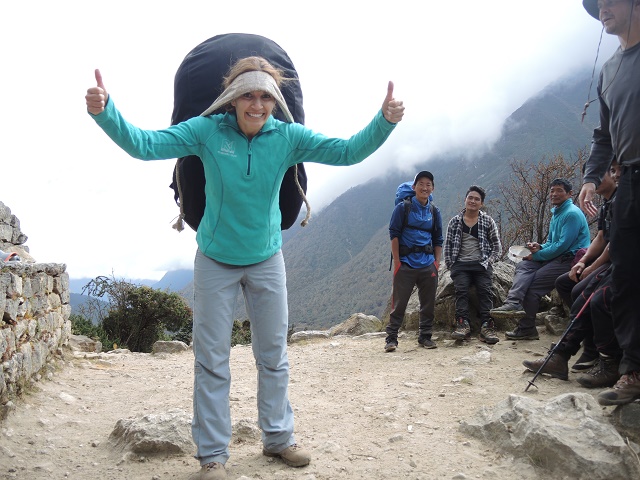 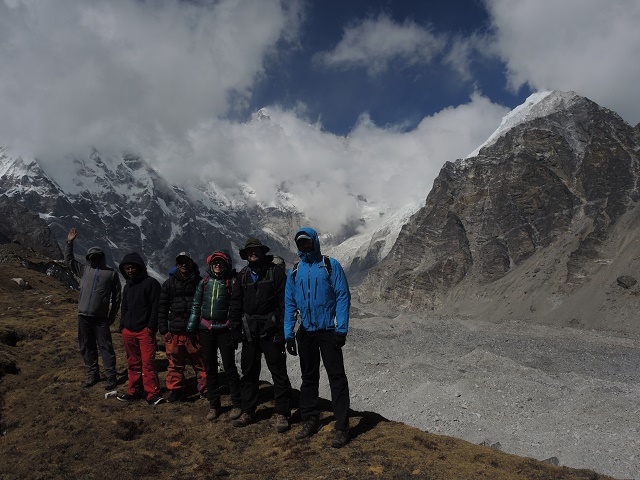 Namaste! We made it back to Kathmandu. Our descent from Khumjung went well, and we decided to expedite it, as the weather forecast looked not the most favorable, and wanted to have an extra day to secure flying out of the mountains without issues. Upon arrival to Lukla, the only storm of the entire trip developed, but we were lucky to get wet for only the last 30min of an almost 2 week hike... not bad! But we flew out yesterday, and were able to farewell the Himalaya from the air, as the skies were still relatively sunny by mid morning. Tired but accomplished, we left the Khumbu with incredible images in the memory, miles in the legs and new friends in the hearts. Our Sherpa and porter crew made it possible for a great trip through this fantastic and mystic mountainous area of the world. All is good now in the city as we await for our flights back home tomorrow. RMI Guide Elias de Andres Martos
Leave a Comment For the Team 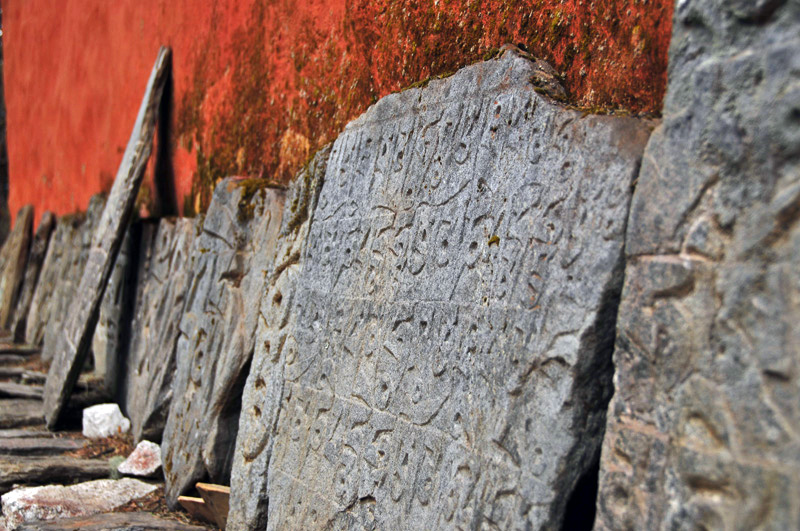 Today we continued to descend the Gokyo Valley towards Khumjung, "The Green Village", which, with its twin city, Kunde, hosts the largest population of Sherpa people in the Khumbu. Sightings of the smaller, yet impresive Ama Dablam, Tamserku and Kantega peaks reminded us we were back to the proximity of the lower lands where we started ten days ago. Upon arrival to Khumjung, we visited its monastery, which believe it or not, conserves a scalp of the Yeti!!! We saw it ourselves. We continued to circumnavigate the perimeter of the two villages following long mani stone walls (fence like dwellings made with flat slate stones engraved with prayers and mantras) which, along with the mist and the domesticated yet majestic yaks, delivered a great deal of Himalayan mysticism. We're now in bed, and bound to Lukla to finish the trek. RMI Guide Elías de Andres Martos and team
Leave a Comment For the Team

Today we descended from Gokyo with the sense of accomplishment of having reached the highlights and high points of our trek. As we descended, only the quiet Turquoise Goddess (Cho Oyu) continued to peer above. The cold temperatures of the late afternoon brought the misty fog to surround us as we made the last turns on the trail into Dhole. The caravans of yaks now substituted those of porters, the tea houses became more hospitable, and the air thicker. We're headed now into the lower Khumbu. RMI Guide Elias de Andres Martos
Leave a Comment For the Team (1) 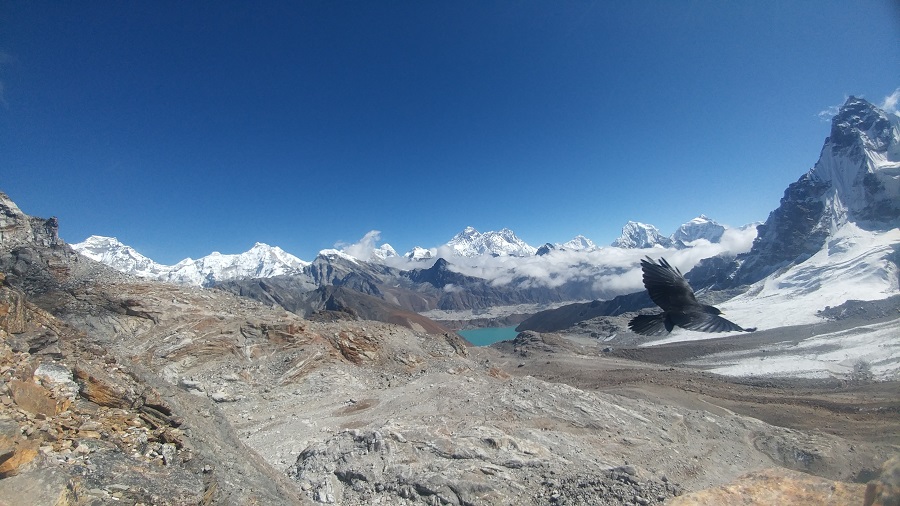 Namaste from Gokyo! We have arrived to the namesake of our trip, a small Sherpa village a stone's throw from Tibet. We had been out of touch the last couple days, on our way up from Thame to Renjo Pass, where we felt the remoteness of our whereabouts. Those two days were filled with great sightings of yak karkas (farms) Kongmas (a high altitud bird endemic of the area), but most definitely, the high peaks that reign above the area. We culminated this morning with the climb up Renjo La Pass, which provided jaw dropping views of Everest, Lhotse and Makalu; we had to take a 1.5h break at its 5,400m of elevation to sink it all in... we just couldn't get enough! The feeling of the effort being so worth it took over the entire group. We then descended towards the turquoise waters of Gokyo lake and made it into our lodge, where we'll be for the next two nights. Tired but happy, we're looking up valley towards another Himalayan giant, Cho Oyu, who's base camp we'll visit tomorrow. Now, it's time to enjoy some dud chai (milk tea). RMI Guide Elías de Andres Martos and team.
Leave a Comment For the Team (1)

Such a studly pic of the peaks in the background and the raven in the foreground!

Better keep an eye on those lunches or those winged critters will get them for sure.

And the magic started to happen... Namaste from Thame. We've left the main Everest trail, and started to encounter less people, enjoy a more rustic path, and an overall more authentic Himalayan experience (not that up to Namche wasn't) But secluding ourselves to the Gokyo trek means enjoying a more authentic journey. The day today was easy, but filled with senses stimulating opportunities; from the mist climbing towards us, to the juniper burning in the villages, or the mystic appearances of Buddhist prayer flags among the fog, the entire way presented multiple chances to amaze ourselves. We climbed above tree line in order to visit the monastery upon arrival to Thame, a side half hour excursion with the excuse of taking pictures of the yaks that seemed to be grazing on the slopes. A pick up ball game with the young boy monks was a true highlight, and despite being at 13,000 feet, we managed to forget about breathing hard and just enjoyed the smiles. We made it back to our lodge, owned by Ang Sherpa, who's climbed Everest "only" 21 times. An honor to be in such a humble home tonight. We're now awaiting our dinner, then it will be bed time and we'll prepare for an early start tomorrow. RMI Guide Elías de Andres Martos and team
Leave a Comment For the Team 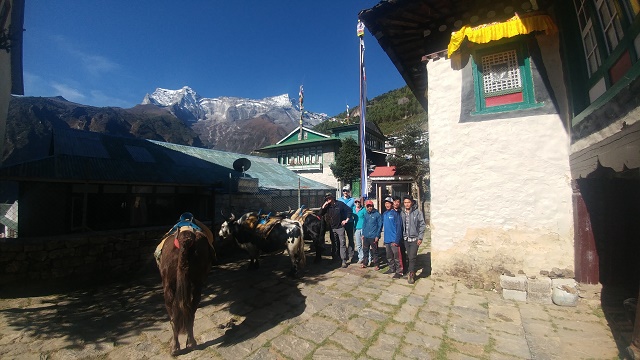 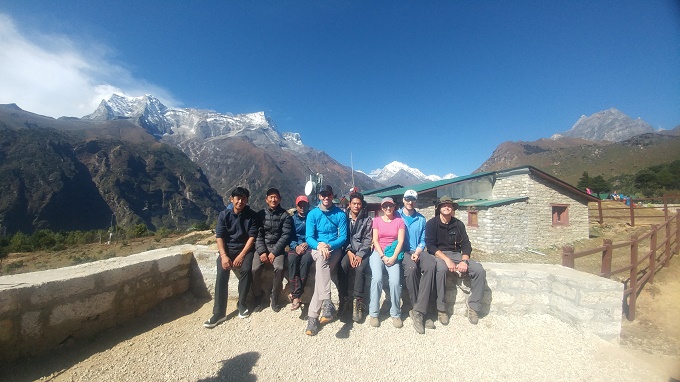 Namaste from Namche, We enjoyed a day in this neurological center that is Namche, old trading town, when the Sherpa from Tibet came to the southern slop of the Himalaya to commerce their goods. In order to allow for acclimating, we took a good walk on the main trail of the Everest Base Camp route, to get astonishing views of the range, with Ama Dablam as the most imposing figure. A small museum with some Sherpa artifacts, as well as graphical descriptions of their traditions provided great education about this old mountain culture. We ventured for lunch away from the tourists, and chose a local "Chia Pasal" where true locals eat their dahl bhat and momos (for a fraction of the price and double the smiles) The afternoon was spent resting, and simply enjoying being in the heart of the biggest mountain range of the world. Stay tuned for more. RMI Guide Elias de Andres Martos
Leave a Comment For the Team 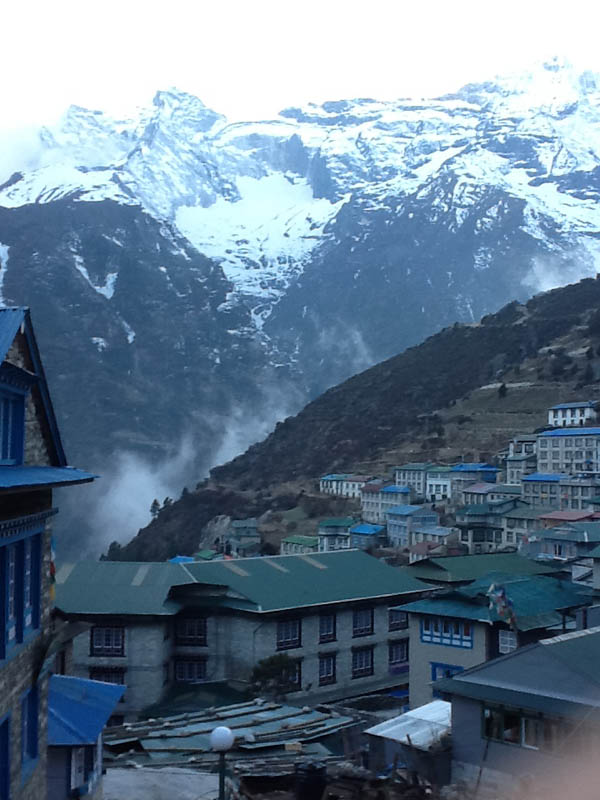 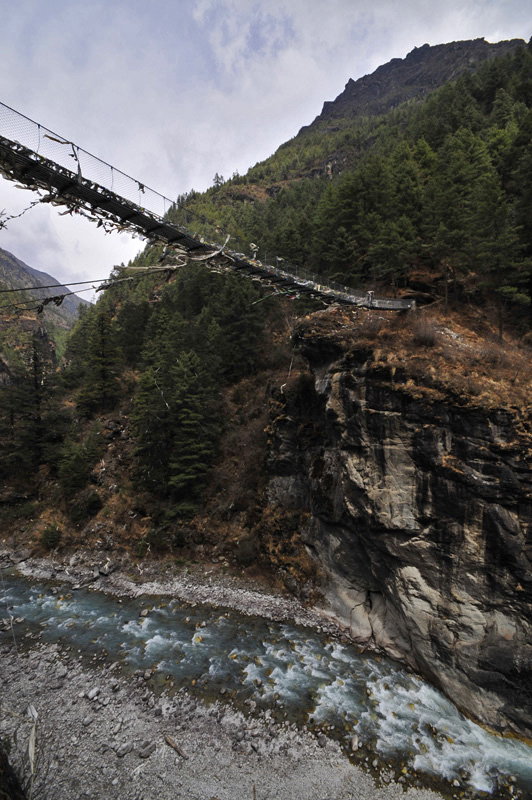 Namaste from Namche Bazaar, a.k.a. "downtown Khumbu", as the Sherpa say. Our second day on the trails delivered the best weather possible, which allowed for the first view of two Himalayan giants, Lhotse and Chomolongma in the distance, but also the towering Tamserku and Kushum Kangkaru, that overlooked our progress like patient sentinels. Crossing the suspension bridges back and forth over the Dudh Koshi River, while taking turns with the caravans of Dzo Dzos (hybrid between yak and cow) added excitement to the steady elevation gaining of our legs. Arriving in Namche was a surreal image, as people from all over the world merge here from the different circuits of this region. Our rewarding dinner is bringing us now close to bed, and we look forward to spending a day here tomorrow allowing our bodies to acclimate to the new altitude. RMI Guide Elías de Andres Martos and team
Leave a Comment For the Team

Tasidelek from Phakding! We flew to the famous Lukla airstrip this morning, and after uniting with our Sherpa guide and our porters, we had a quick breakfast and hit the trails. The majesty of the Himalayas quickly overwhelmed our senses, and despite the fact that low in the valley the crowds are somewhat sizeable before they disperse, we embraced what the cobbled trails started to offer out of the gates. We're now about to have dinner and an early bed time to compensate for the early wake up today for the airplane ride. However, the slow pace of life in the Himalaya is setting in, and we love it. RMI Guide Elías de Andres Martos and team
Leave a Comment For the Team (1)

Have a nice expedition!! Be safe.

Namaste from Kathmandu! Everyone arrived safely and timely to Kathmandu late last night. We had an easy day today just resting after the long hours of international flying, enjoying our welcome meal in the Thamel area, and wandering a bit in the busy streets of that area of town before the jet lag started to set in. We called it a day on the early side to allow the body to start adjusting with ease to the time change and in preparation for a busier day tomorrow. The upcoming day will be a a formal visit of the main historical monuments of Nepal's capital and packing for our flight into the mountains the following day. Stay tuned for the real start of our Gokyo adventure soon! RMI Guide Elias de Andres Martos and team
Leave a Comment For the Team (2)

Hey Steve! Hope the hiking is going well.  Enjoy the scenery and take lots of pictures to share! Looking forward to virtual tour when you return!

Namaste Marie-Sarah, François and all,
Wide open your eyes and enjoy these calm and zen places.

Previous Page
Filter By:
check the Summit Registry try our Adventure Finder
Back to Top