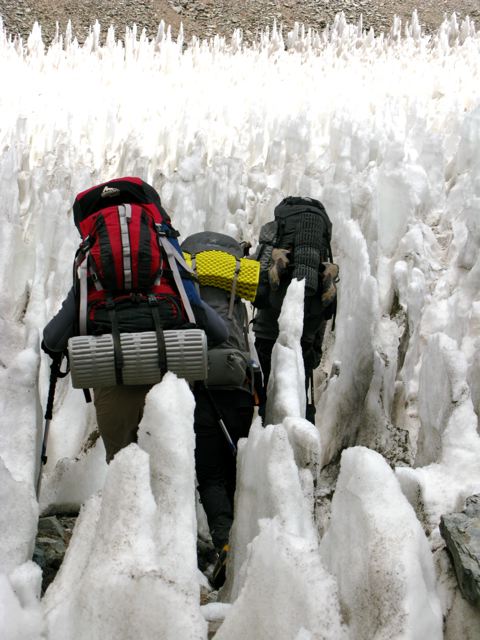 After spending four nights at Plaza Argentina the routine began to feel a bit like the movie, Groundhog Day, same people in the same clothing, tasty but similar meals, etc. We packed up our remaining gear and clothing and headed uphill around 9 am. The most advantageous aspect of our time at PA was the acclimatization. It showed today, with lighter packs the Team was in camp in under four hours and they felt good enough to descend to 15,500’ and back carry our heavy cache from two days ago. We are currently snacking and relaxing in our tents, organizing gear and getting ready for a well earned meal at 16,400’. The wind is light and should remain until the 26th. Camp 1 is located on a large flat ‘bench’ with Ameghino flanking the northern slope. On most days you can lie in your tent and listen to the wind above as it builds up and then comes crashing down like a wave. Our agenda for tomorrow is a bit in the air due to the extra work of the back carry. I think we will have a casual morning and see how people are doing then ideally carry some food, fuel, and equipment to Camp 2. RMI Guide Mike King

sounds like an incredible experience. glad everyone is doing well.  Hope u r sharing some of your funny stories during rest time , Neil.  Merry christmas.  Love u Mom

Glo, I am living vicariously through you.  Love you Aunt Char

You have incredible strength and strong spirits!  Keep on climbing!!  It sounds amazing!

Wishing you all a very Merry Christmas!! May the joy of Christmas fill your hearts and give you strength to push on forward!

Patty, thank you for your beautiful birthday card!!  I am with you!!

Much love and big hug!
Sally

Glad to hear about your progress! We had the Gilbride gift exchange yesterday - good times had by all. The G2 byog experiment was a huge hit! Nancy made sure everyone knew in advance we were all to be out by midnight, lol. I drove our whole crew of 6 home in the van. Rowe and Dad led us in a rowdy version of the 12 days of Christmas. Keep up the good work S&G. Love, the Chartbigs.

Sounds like the plan is moving you all ahead. I admire so much your incredible strong characters and stamina,
Love you Glo.