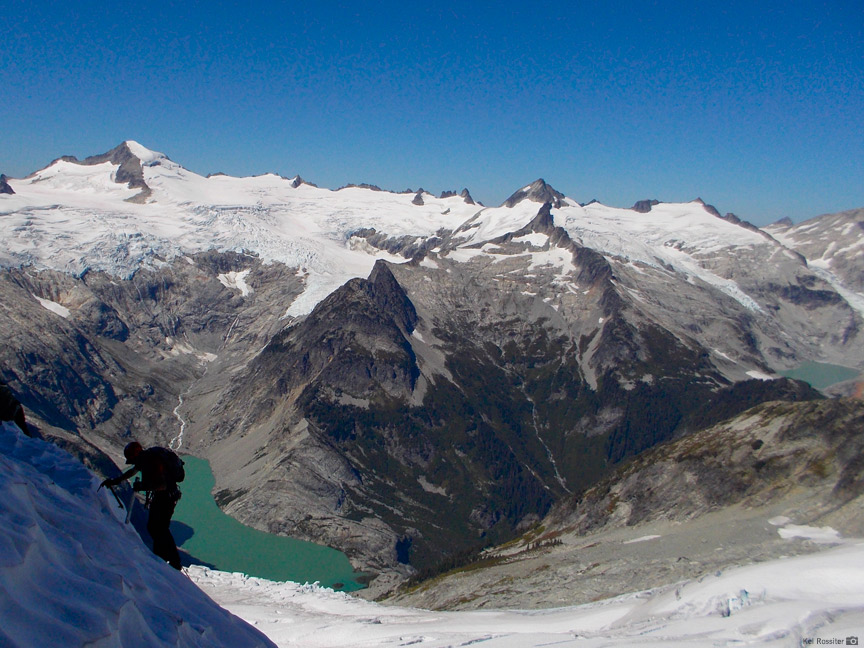 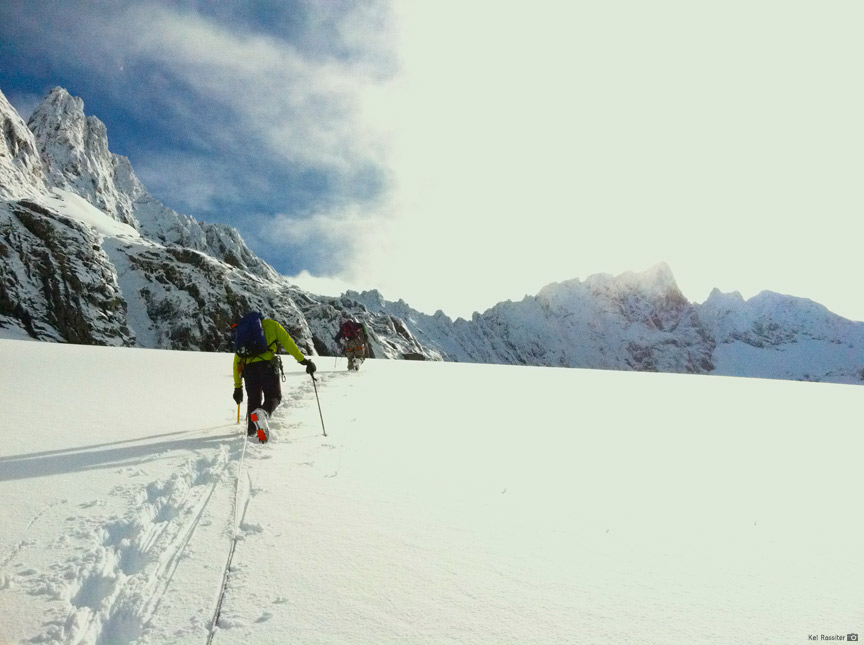 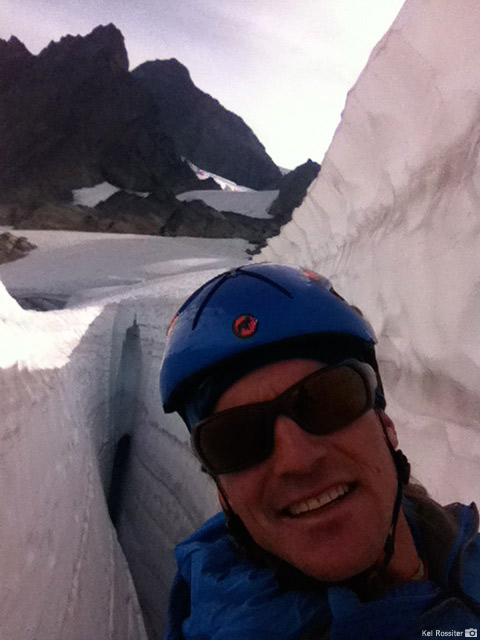 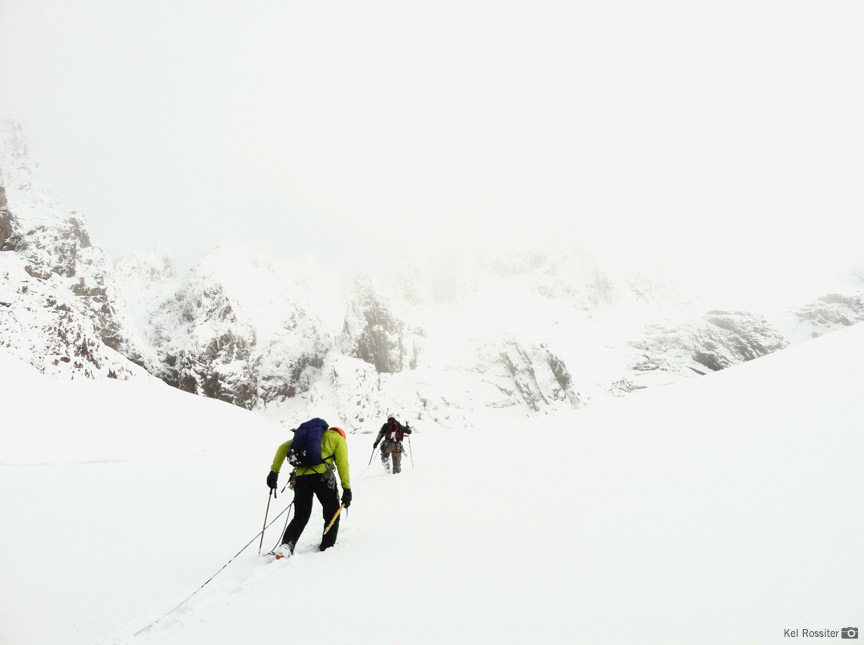 “You can't win if you don't play” is dubious encouragement often doled out by Las Vegas casinos and the like—but it is solid counsel in the world of alpine climbing. I can't tell you how many times I've plodded through a milk puddle of clouds on the Muir Snowfield only to rise above it all upon reaching Camp Muir. Indeed, even in the face of slim weather odds, you've got to at least put yourself into position for success and be ready to maximize it should those slim odds work in your favor. Time and time again that alpine advice held true during my recent American Mountain Guide Association (AMGA) Alpine Guide Exam (AGE). Arriving in Seattle in mid-September for my 10-day AGE, I stared at the bright screen of my smart phone and steeled myself for the grim weather forecast it proposed...my First Ascent BC-200 had seen me through many a maelstrom on Rainier, but ten days of that? Like any climber of peaks like Rainier, Denali, Cotopaxi, or Orizaba, the wheels on this particular bus had been set in motion many, many months before and there was far too much invested to pull it over to the side of the road due simply to predictions of a deluge. The AMGA is the premier training path for America's professional climbing guides and the 10-day AGE is the culminating exam that guides take in order to become Certified Alpine Guides. Along the way toward that test, hopefuls must first take a 10-day Rock Instructor Course, a 9-day Alpine Guides Course, a 5-day Ice Instructor Course, an 8-day Advanced Alpine Guides Course, a 3-day Alpine Aspirant Exam, a 6-day American Institute for Avalanche Research and Education Level 3 Course and Exam, and a then—finally—the 10-day Alpine Guide Exam. In case you weren't counting, that's 41 days of training in all—and that doesn't even begin to include the climbing resume you have to develop in between courses. All in all, that's a triple wallop of a lot of tuition, a lot of travel costs, and a lot of opportunity costs in the form of lost wages. Fortunately—and very, very thankfully—RMI, Whittaker Mountaineering, and Eddie Bauer/First Ascent helped to take some of the sting out of the tuition costs, but that aside, there was still no way I was going to let a grim weather forecast rain on my parade! Now the only problem was: “Would the grim weather forecast rain on the whole AGE parade?” You see, in order for an AGE to be valid, the examiners need to see you in a variety of terrain and situations—and if the weather doesn't allow those windows to open... 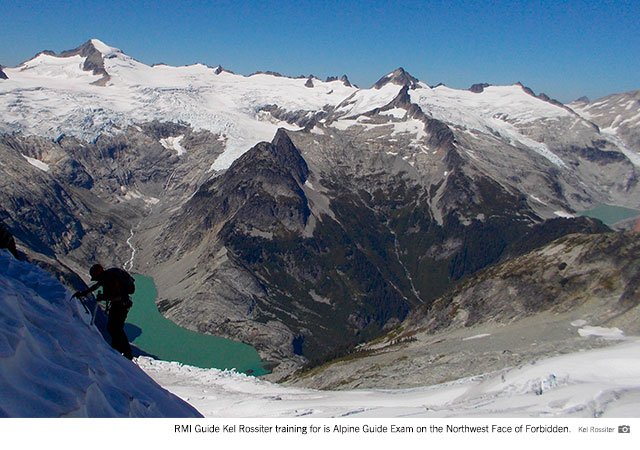 Fortunately, time and time again, in the face of doom, gloom, cats, and dogs we put ourselves into position for success and just barely, and just somehow, squeaked it out. For the first few days we enjoyed the relative “rain shadow” that the Washington Pass area of the North Cascades provides. Washington Pass doesn't allow for glacial travel though—an integral part of the AGE—so after two days we had to leave that safe harbor for the shores of Mt. Shuksan. We arrived in the Lake Ann/Fisher Chimneys trailhead in a steady drizzle. By the time we packed up, things had improved, but the rest of the day was something of an ongoing “fashion show” as we put on a rain shell, took it off, added a warmth layer, and tried to predict what the weather would look like in five minutes. And in the backs of our minds all imagined how things might unfold. Happily, we were most certainly rewarded for our efforts: By the time we topped out on Fisher Chimneys and rolled into our bivvy site, we were high above the roiling sea of grey valley clouds. So often it's the case on Mount Rainier that we'll radio down to Ashford and hear that they're thick in the rain while up at Camp Muir we're above it all. Such was the case on Shuksan, and the next day we managed to circumnavigate the Upper Curtis, Sulphide, and Crystal Glaciers and climb the summit massif's Northeast Ridge—my first time doing that particular route and highly recommended! As the forecast shifted from grim to grimmer, we again decided to head over to Washington Pass. Driving over Highway 20 toward our meeting point at the Cutthroat Peak trailhead, my windshield wipers clicked a steady rhythm in time with the electronic music I was listening to to try to psych myself up. I arrived early at the trailhead and the rain continued. I cranked more psych music as I attempted some gear-sorting-inside-the-car-yoga poses. Then, miraculously, it began to clear. Not the swift and sure kind of clear that let's you know a new weather attitude is on the way—more like the resistant backing away of an angry dog that's just been called by it's owner, but enough to make a climb seem viable. We racked up, packed up, and headed for Cutthroat Peak's South Buttress. While it is true that “you can't win if you don't play”, it's also true that it's a bad idea to climb yourself so far up an objective that retreat becomes untenable. Fortunately, the South Buttress offers plenty of bail options, so with one eye on the clouds and the other on my rope coils, we moved upward, steadily gaining another plum Cascade peak. By then, we'd heard reports from a group of Advanced Alpine Guide Course participants that the Boston Basin area (home to West Ridge of Forbidden, Torment-Forbidden Traverse, Sharkfin Tower, and Sahale Peak, among others) had already received six inches of the new winter's snow. Fresh snow poses it's own set of problems in the alpine world, but deciding that fresh snow was more palatable than dealing with the reported dousing on the way, so up we went! These days, I'm climbing on snow for at least a part of almost every month of the year, but it's not often I'm dealing with fresh snow in September. Skis or snowshoes weren’t a part of our packing list, so lift-kick-step-sink-lift was the interminable process as we moved up through the now 10 inches of fresh snow covering the Quien Sabe Glacier. A circumnavigation/summit of Sahale Peak was our goal, and we eyed the valley clouds warily as we proceeded in dogged pursuit. Soon the clouds enveloped us and in between breaks we attempted to plot the best path ahead. After some steep, snow-laden slopes, a bergschrund crossing, and the final rocky summit scramble we were on top of our last AGE objective, Sahale Peak! 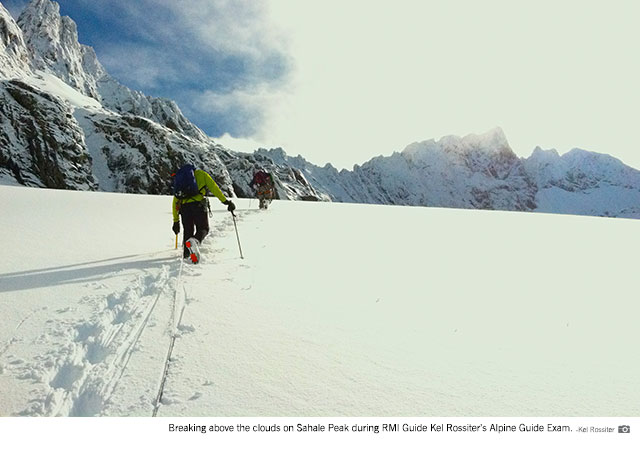 By day's end I was back in a Bellingham motel room, enjoying the comforts of a shower, eat-in Thai Food, and 581 channels. On every weather channel, stoic looking forecasters delivered the report with the delicacy of a cancer ward counselor: the patient's condition was not improving. I spooned the last bit of tofu out of my box of green curry and grinned: For the last ten days we'd prevailed in the face of such gloom and doom forecasts, and now, with the AGE wrapped up I was much more than just a survivor, I was finally an AMGA Certified Alpine Guide! 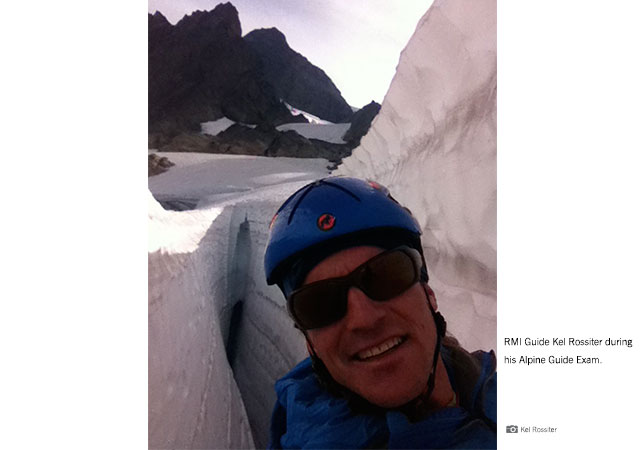 Achieving AMGA Alpine Guide Certification only occurred through a lot of support. Thanks to RMI/Whittaker Mountaineering/Eddie Bauer-First Ascent for their solid support of guide professional development. Thanks to all of the RMI guides who, through their sharing of skills, techniques, and approaches, have honed my own alpine guide skills; and particular gratitude to Andres Marin, Geoff Schellens, Jake Beren, Levi Kepsel, Eric Frank, Leon Davis, Elias De Andres Martos, and Rob Montague who shared with me their time and talents in the field as I worked toward this goal. - RMI Guide Kel Rossiter

Congrats Kel!! Photos look awesome!! I will be back to Rainier in 2014, this time in August and determined to make the summit.