Sunday, June 30, 2019 - 10:26 PM PT Storms were forecasted for today... 90% chance of snow. But when we looked at the world at 4:30 this morning, things were just pretty, clear and calm. So we got up and ate breakfast. After breakfast it was still just fine in our neighborhood, so at 7 AM we set off to do a carry onto the West Buttress. The track was well packed and so we made great progress in the shadows, moving up a series of gradually steepening hills until we were at the "headwall" and the ropes fixed in place up it. The start was a little sporty since there was a small vertical wall to scale in order to get past the bergschrund (a particular kind of crevasse at the top margin of a glacier). But with the aid of the rope and some sharp crampons, we each clawed our way up and over the lip to begin the merely steep and never ending slope above. But it did end as we pulled onto the ridge crest at 16,200 ft which turned out to be the perfect place for a rest break at 10 AM. Then we began climbing the ridge itself with spectacular-and still largely clear- views and the cleanest pink and white granite to clamber around and over. One more short section of fixed line took us up the steep flanks of Washburn’s Thumb at 16,800 ft and then it was relatively easy -but exciting- ridge walking with the Peters Glacier far below on the left and Genet Basin 3000 ft down on the right. By this point there were starting to be a few clouds and some wind gusts, but with the mild temperatures the wind wasn’t much of a concern. We cruised into 17,200 Camp at 12:15 and had a brief reunion with Mike Haugen’s team encamped there and waiting for the weather up top to be workable (it wasn’t today... too windy). With the idea of getting lower down before the storm moved in, we cached our supplies and skedaddled down the ridge. We were almost back in camp at 3PM when the clouds formed fantastic waves and tendrils all around the upper mountain. It began to snow heavily just after our six o’clock dinner of tortellini and soup... fulfilling the 90% prophecy. But we got our carry in. Rest is in order for tomorrow. Best Regards, RMI Guide Dave Hahn 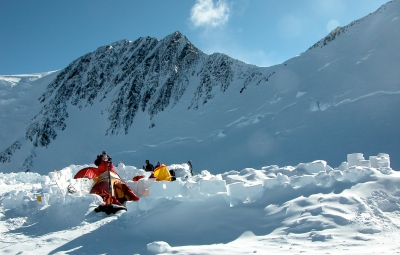 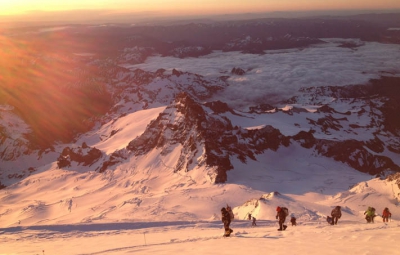